This Day in History: Outlaw Jesse James Is Killed (1882) 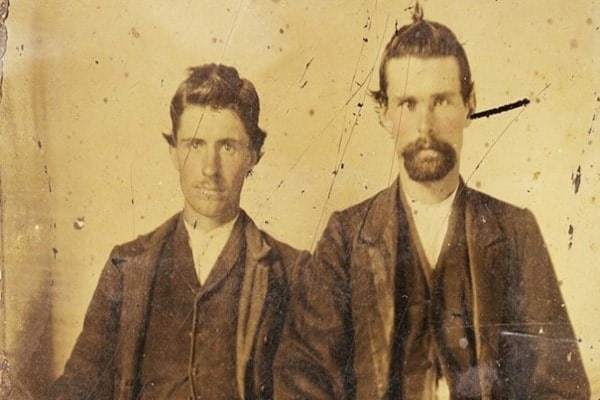 This Day in History: Outlaw Jesse James Is Killed (1882)

The image above is very interesting. The reason is that it is the only known image of the famed criminal Jesse James (on the right) with his killer, Robert Ford (left). While for years it was impossible to say if the photo was authentic or not, it has been since been scientifically examined. Apparently it is real.

The story of Jesse James is legend. In fiction, James and his gang are idolized as a group of men who turned to crime for reasons beyond their control. As is the case with most fiction, this is highly sensationalized. James and his gang were killers, and stole for no altruistic purpose that we know of.

On April 3, 1882, James was betrayed by fellow gang member Bob Ford. Ford shot Jesse James in the back, and claimed the reward money from the Missouri state Governor.

The start for Jesse James was as a Confederate fighter in the south. Both he and his brother participated in the killings of settlers and Union troops. Once the Civil War was over, the boys went back to their quiet life in Missouri for small amount of time.

However, they did not find it exciting enough. Their first bank robbery happened on February 13, 1866. Some of the legend of Jesse James that comes from fiction has to do with politics. He joined a gang of former Confederates who would all take part in robberies and assassinations. Most of their targets (at least at the beginning of their crime spree) were owned by northern, anti-slavery, or pro-Union Republicans. Hence the idea that the James gang fought and committed crimes for a more unified purpose outside of just making money.

Over the course of the next 16 years, the gang would peak and fall. In the early years, locals would cover for James and his gang, preventing their capture and arrest. However, as their criminal actions started to affect non-political actors (meaning they started robbing fellow former Confederates), their support dried up, making it easier for the government to pick away at their numbers.

James first became famous, and the leader of the gang when he shot and killed a cashier at the Daviess County Savings Association in 1869. He and his brother Frank had to escape a posse, and they were rewarded with coverage in the newspaper for the first time.

On April 3, 1882, Bob Ford, who had only just joined the dwindling James crew, made a deal with the Governor of Missouri. He and his brother had been living with Jesse James and his wife (who was also his first cousin) while they planned their next illegal escapade. While in the living room of their home, and while Jesse James had his back turned, Ford pulled his revolver and shot James in the back of the head.

It has been postulated that James knew it was coming, and he did have some clue that members of his gang had betrayed him. Whether this is true or not, no one really knows.