Mysteries of the Old West: Did Pat Garrett Kill Billy the Kid? 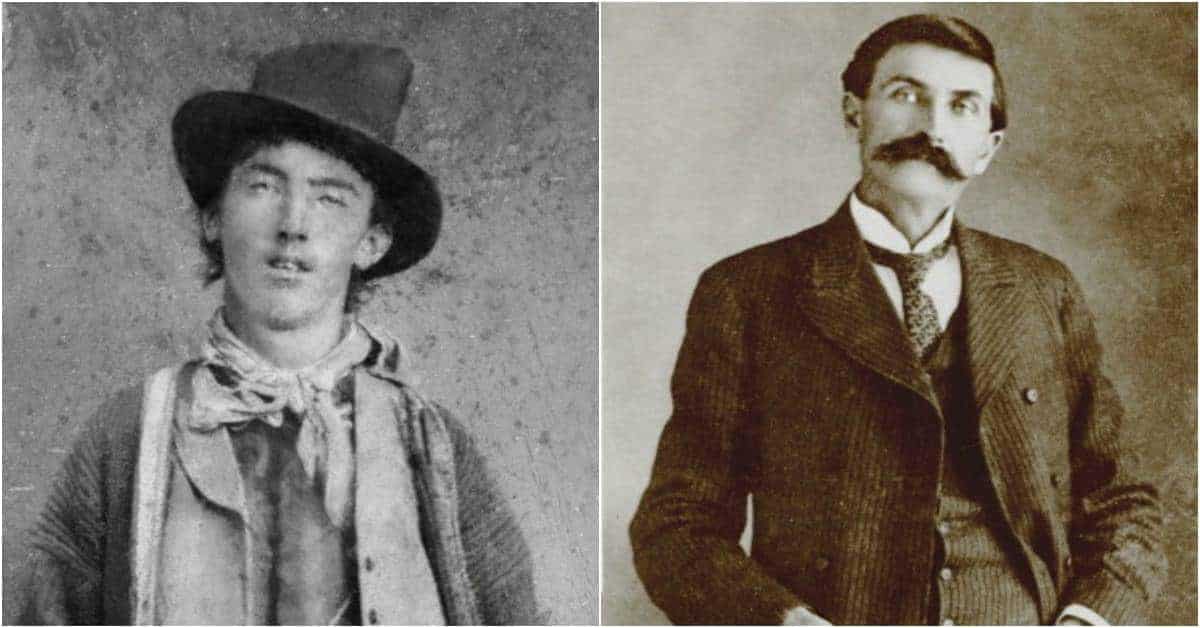 Mysteries of the Old West: Did Pat Garrett Kill Billy the Kid?

Born Henry McCarty in 1859, and also known as William H. Bonney, Billy the Kid gained notoriety during his short time on Earth as a gunfighter in the Old West. He killed anywhere between four and ten men depending on the accounts you read, and died in Fort Sumner in New Mexico on July 14, 1881, when he was just 21 years of age.

In a previous article about the life of Pat Garrett, I wrote that he killed Billy, the Kid; a statement which is the official version of events but it provoked much disagreement. However, if the Kid was murdered in that house, it is hard to prove that it was anyone other than Garrett; mainly because the version of events we are fed come primarily from Garrett’s own account.

Another possibility is that Garrett murdered someone else and covered it up which meant the outlaw escaped. A man known as ‘brushy’ Bill Roberts claimed to be the Kid. However, his claims are not backed up with evidence, and most credible historians laugh his claim off as nonsense.

The Life of an Outlaw

Billy was probably born in New York City, and when his father died, he moved to Silver City in the New Mexico territory in around 1873. In truth, there is scant detail of his early life. Some historians believe he was born in Missouri or Indiana as late as 1861. We only begin to get a clearer picture of his life from 1877 onwards when he moved to Lincoln County in New Mexico.

It wasn’t the best time for him to move there since Lincoln County was in the midst of a war between two groups of local cattlemen for power. By this time, Billy had murdered his first man, a thug named Frank ‘Windy’ Cahill, in Arizona on August 18, 1877. The Kid apparently killed Cahill in self-defense.

If he thought he could escape violence, he was sorely mistaken. Billy worked for a man named John Tunstall who was murdered by the warring faction in the Lincoln County Wars. The Kid vowed to get revenge on those responsible and on April 4, 1878, he attacked Sheriff William Brady, as a member of the Lincoln County Regulators. The ambush resulted in the murders of the Sheriff and Deputy George Hindman. The rest of Billy’s short life was steeped in death.

The Kid was heavily involved in the Battle of Lincoln on July 14, 1878, which resulted in several deaths. Billy was indicted for the murder of a bookkeeper named Morris Bernstein (which took place on August 5) even though the murder was probably committed by a policeman. On January 10, 1880, Billy shot and killed Joe Grant. Sources suggest that the Kid believed his victim was sent to murder him, so he supposedly managed to rig Grant’s gun to ensure it was on an empty chamber. When Grant tried to kill Billy, the gun didn’t go off, and the Kid shot Grant in the face. New Mexico’s Governor, Lew Wallace, placed a $500 bounty on the Kid’s head in December 1880. By now, the famous lawman, Pat Garrett, had the outlaw in his sights.

Garrett succeeded in capturing Billy the Kid and a few other outlaws at Stinking Springs on December 23, 1880. Billy was sentenced to hang on April 13, 1881; the judge set his execution day for May 13. The Kid was moved to a jail in Lincoln, New Mexico but escaped on April 28 before the hangman’s noose could claim him. He murdered two deputies, James Bell and Bob Olinger, during the escape.

Pat Garrett was away at the time and didn’t try to track the Kid until he received information that the outlaw was holed up in a ranch at Fort Sumner, some 140 miles away from Lincoln. Along with deputies Thomas McKinney and John Poe, Garrett reached the Fort on the night of July 14, 1881. Billy had numerous friends and people sympathetic to his plight at the Fort, so the lawmen found it difficult to extract any information. Garrett decided to seek out Peter Maxwell, an old friend who lived in the area, in the hope that he could receive some details about the fugitive’s whereabouts.

At around 9 pm, Garrett and his deputies rode to a peach orchard in the area to chat with Maxwell. They saw a group of men nearby who were speaking in Spanish. One of them suddenly got up, walked out of the orchard, and leaped over a fence. This man was Billy; he was lounging around the orchard at the same time the lawmen entered. He realized that the law had made its way to Fort Sumner, so he fled towards Maxwell’s compound.

The Final Moments of Billy the Kid

At midnight, Garrett moved silently towards the Maxwell house’s southeast corner, just outside Maxwell’s bedroom. He left his deputies outside as he entered the room in a bid to rouse his friend and question him. At around the same time, Billy was hungry, so he woke up and walked towards the fresh meat that was hanging on the rafter above the porch outside of Maxwell’s bedroom. He was armed with a knife and a gun.

At almost precisely the same time, Garrett woke Maxwell up; his friend was understandably annoyed at being disturbed. Meanwhile, Billy encountered Poe and McKinney and apparently said ‘Quien es?’ which means ‘who is it?’ in Spanish. Billy supposedly aimed his gun at Poe while backing into the nearest door, which happened to be Maxwell’s bedroom. Once inside, he asked Maxwell: “Who are these fellows outside Pete?” Maxwell said: “That’s him!” to Garrett, who opened fire almost as soon as Billy said: “who are you?” in Spanish.

Maxwell lit a candle to illuminate the room and the body of Billy the Kid lay motionless, with Garrett’s bullet lodged in his heart. The following day, the Kid was buried in the Fort Sumner cemetery. Of course, the above is Pat Garrett’s account which has been disputed by many people ever since.

Let’s get the issue of imposters out of the way quickly. Brushy Bill Roberts, who died in 1950, claimed that he was the Kid. However, he was unable to remember important events in Billy’s life such as the Lincoln prison escape, he didn’t really look like the outlaw, he was illiterate while the Kid wasn’t and finally, his birth date was recorded in his family Bible as 1879.

John Miller, an Arizona man, also claimed he was the outlaw. There are also suggestions that Billy and Garrett were friends and planned the whole incident so the fugitive could escape. There is little or no evidence to back up any of these claims.

What is far more relevant to the case is the issue of discrepancy in the testimonies of Garrett, Poe, the coroner and several other people. For instance, Poe does not remember the significant incident at the peach orchard. After the shooting, Garrett claimed the Kid had a .41 caliber pistol in his hand, Poe said it was a .38 caliber. Furthermore, several of Billy’s friends say he only had a knife and not a gun. Garrett claims that he stayed in Maxwell’s house with his men for the entire night. However, Poe and several other people say they moved the body quickly, dressed it and prepared it for a wake.

One of the residents of Fort Sumner, ‘Paco’ Anaya, wrote that after the shooting, Garrett handed a piece of paper to Alejandro Segura, the Justice of the Peace. He had already written down the jury’s ‘verdict’ and asked Segura, Anaya and the rest of the jury to sign it. The report said: “We, the jury, find that Billy the Kid (met) his death by a bullet which was fired from a gun in the hands of Pat F. Garrett.” Garrett apparently lost the verdict by the next morning. However, there is no other evidence of this; we are relying on Anaya’s word alone for the entire existence of the jury and its verdict.

In the aftermath of the apparent shooting, numerous people claimed to have met the Kid. For example, a Mrs. Wood of Seven Rivers said she served the outlaw dinner three days after he was supposed to have died. There were at least 26 newspaper articles written that claimed Billy was still alive after July 14, 1881. During an interview in 1983, Pat Garrett’s last surviving daughter, Elizabeth, claimed that her father did not kill the Kid.

Overall, there are a huge number of unanswered questions. For example, Billy was extremely naïve on the night in question. An experienced outlaw (even at a tender age) would surely have recognized two deputies standing on the porch. He also wouldn’t have backed into a darkened doorway where more danger possibly lurked. There are different accounts regarding the tip-off that brought the lawmen to Fort Sumner, the encounter at the orchard, and the moments before and after the shooting.

Although the incident happened well over a century ago, it remains an intriguing mystery. Did Pat Garrett kill Billy the Kid as per the official tale? If not, did someone else shoot the outlaw? Perhaps he killed an innocent man as the fugitive escaped and fled to Mexico? Whatever happened, the answer will probably remain a secret forever.

US Marshal Service – How Much Did It Cost to Find Billy the Kid?

El Paso Times – 1934: Pistol That Killed Billy the Kid Will Be Returned to Garrett’s Widow

CNN – A Pardon for The Notorious Billy the Kid?

All About Billy the Kid – Fact vs. Myth