Heroic People Who Deserve to be Way More Famous 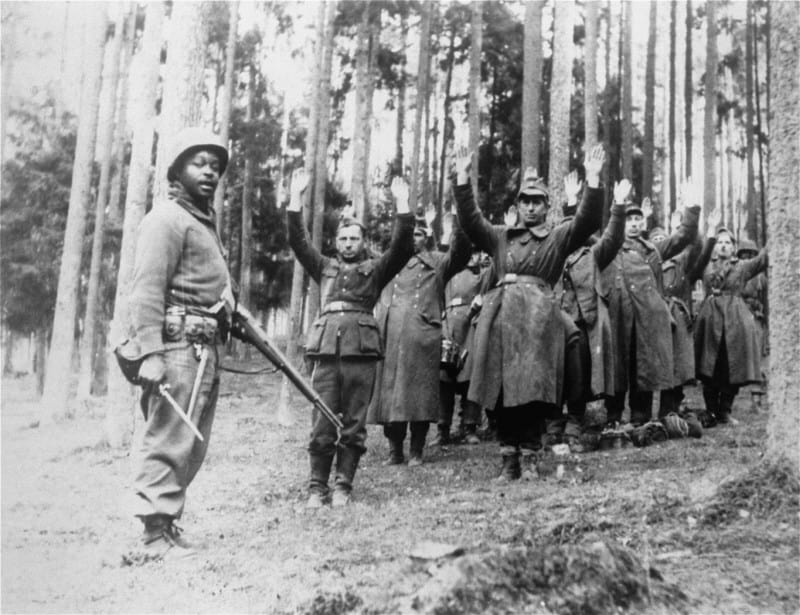 Heroic People Who Deserve to be Way More Famous

4. Shot Down Behind Enemy Lines

Bruce Carr’s daring flying got him noticed, and in August 1944, he was commissioned a second lieutenant. On September 12th, 1944, Second Lieutenant Carr’s squadron strafed Ju-88 bombers on a German airfield. On the way back, his flight spotted more than 30 Fw 190s two thousand feet below them. The Americans pounced, and in-display of daring airmanship, Carr personally shot down three enemy fighters in just a few minutes – an aerial hat trick. He then escorted a fellow American pilot, whose airplane was severely damaged, back to base.

Carr’s heroic exploits that day earned him a Silver Star, America’s third-highest decoration for valor in combat. He became an ace on October 29th, 1944, when he shot down two more Bf 109s over Germany. Four days later, while leading his flight on a strafing run over a German airfield in Czechoslovakia, Carr’s P-51, Angel’s Playmate, was hit by anti-aircraft fire. He bailed out from his fatally damaged plane and parachuted safely to earth. Carr had escaped death in the air. Now he set out to escape Germans on the ground.

Bruce Carr found himself stranded hundreds of miles behind enemy lines. He evaded capture for several days, but the going was rough. Eventually, cold, wet, exhausted, and starving, he decided to surrender. He knew that German airmen treated enemy airmen better than other POWs, so he headed to a Luftwaffe airfield that he had spotted. He made it to the surrounding fence, and decided to hide in adjacent woods that night, then walk up to the front gate and surrender the following morning. However, Carr saw something that made him change his mind: German ground-crew fueling and performing maintenance on an Fw 190 at the edge of a runway, close to his hiding spot.

When they were done, the Germans tightened the panels back on the plane and left, leaving it ready for combat the following morning. A plan began to form in Carr’s mind – more heroic than anything he had pulled off thus far. That night, Carr worked up the nerve to sneak up to the enemy fighter, and climbed into its cockpit. He fought off sleep until dawn’s early light allowed him to inspect the instruments. Everything was labeled in German, but there were enough similarities between the German and American cockpits for Carr to guesstimate what did what.

2. This Airman Pulled Off One of the Most Extraordinary and Heroic Escapes of WWII

Bruce Carr found the Fw 190’s starter lever, spent half an hour building up his courage, then pulled it. Nothing happened. German starters worked the other way around. He eventually pushed it forward instead of pull it back, and the fighter’s BMW motor roared to life. Carr dared not risk his escape by wasting any time taxing to and lining up on the runway. Pouring on full throttle, he raced across a corner of the airfield, between two airplane hangars, then over the heads of sleepy and befuddled Germans. Upon reaching Allied territory, ground troops opened fire on the American pilot’s Fw 190.

To avoid friendly fire, Carr flew just above treetop at 350 mph. After flying about 200 miles, he reached his airfield. Unable to deploy the landing gear or communicate via radio, Carr made decided to make an immediate belly landing before his own airfield’s defenses blasted him out of the sky. Military police surrounded the crashed Fw 190, and refused to accept Carr’s word that he was American. It was finally sorted out when the group commander arrived, and identified his missing pilot. Carr’s heroic escapade made him the only Allied pilot to leave on a mission in a P-51, and return in an Fw 190.

After his return, Bruce Carr was promoted to the first lieutenant and was granted a well-deserved leave. However, his heroic escape was not the end of his heroic deeds, and his wartime exploits were far from over. On April 2nd, 1945, First Lieutenant Carr led three other American fighters on a reconnaissance mission, when they spotted 60 German fighters above them. Despite the 15:1 odds against his flight, Carr immediately led an attack. Within minutes, he and his companions downed 15 Germans. Carr personally shot down two Fw 190s, three Bf 109s, and damaged a sixth plane.

That made Carr the European theater’s last ace-in-a-day (somebody who shot down 5 or more enemy planes in a single day). It also earned him a Distinguished Service Cross, the country’s second-highest award for valor. By war’s end, Carr had flown 172 combat missions, scored 15 confirmed air-to-air kills, several more unconfirmed victories, and numerous ground kills. He flew another 57 combat missions during the Korean War, and 286 more in Vietnam, earning a Legion of Merit and Three Distinguished Flying Crosses. He retired from the Air Force as a colonel in 1973, died of prostate cancer in 1998, and is buried in Arlington National Cemetery.

Black Past – Deacons For Defense and Justice

Cobb, Charles E. – This Nonviolent Stuff’ll Get You Killed: How Guns Made the Civil Rights Movement Possible (2015)

Cracked – Unsung War Heroes Who Deserve Their Own Movies

Straw, Leigh S. L. – Lillian Armfield: How Australia’s First Female Detective Took on Tilly Devine and the Razor Gangs and Changed the Face of the Force (2018)