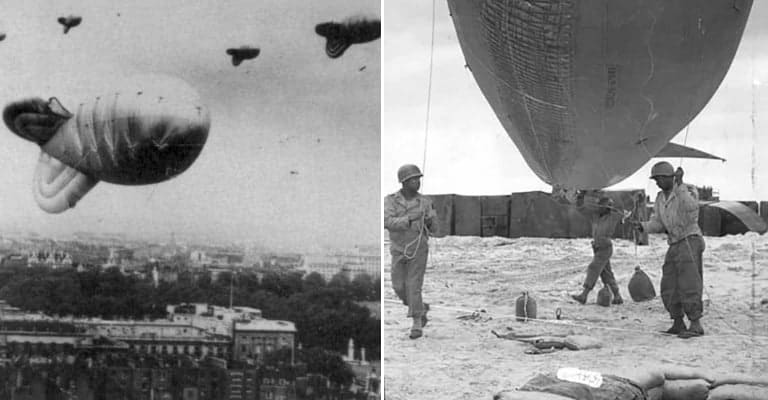 7. Overcoming the Technical Problems of Breaching a Dam

Initial thinking when it came to blowing up a dam centered on the use of a really big bomb – the bigger, the better. A smaller bomb, provided it went off against a dam wall at a sufficient depth, would destroy the dam, but the dams were protected by underwater torpedo nets to prevent that. Eventually, British scientist Barnes Wallis finally figured out a solution: bounce a bomb over the water’s surface and over the torpedo nets like a skipping stone until it struck the dam’s wall, at which point it would sink down the wall, and once at the requisite depth, explode. The surrounding water would concentrate the resulting blast against the dam, resulting in a breach.

To get the explosive to skip on the water’s surface, then sink along the dam’s inner wall after striking it instead of bouncing back, Wallis devised a spinning drum filled with explosives. A bomber would approach the dam flying low above its reservoir, and at the proper height and distance from the target, release the explosive drum, which a motor had set to spinning counterclockwise. The bomber’s speed would propel the drum skipping over the water surface, bouncing over the underwater torpedo nets. Once it struck the dam, the drum’s counter-rotation would ensure that it hugged the dam’s wall while sinking. At the proper depth, hydraulic pistols would set it off, and basic physics would take care of the rest.

6. The Special Training for Dam Busting

For breaching the Ruhr Dams, Barnes Wallis’ science was good and his theory was sound. To go from theory to action, however, the British needed pilots and aircrews with sufficient skill and courage to conduct the raid in accordance with Wallis’ requirements. 24 year old Wing Commander Guy Gibson was personally selected by RAF Bomber Command’s chief, Arthur Harris, to form and lead a special squadron for that and similar missions – essentially a unit of elite aerial commandos. Gibson’s aircrews trained in modified Lancaster heavy bombers, fitted with a motor in the bomb bay to spin the explosive drum.

The drum had to be released at a height of 60 feet to properly skip on water. To determine the correct height, an ingeniously simple technique was adopted: two spotlights were placed on the bomber’s front and rear, and angled so their lights would meet at the water’s surface when the bomber was 60 feet aboveground. Correct distance would be determined by lining up two sticks on the windshield with two towers to the sides of dam. As the bomber flew in, the sticks would visually be to the outside of the dam towers, sandwiching them. As the bomber drew nearer, the angle between bomber and towers would grow wider, and as seen from the windshield, the towers would “move” closer to the sticks until, at the correct distance, sticks and towers lined up.

On the night of May 16th, 1943, nineteen Lancaster bombers of 617 Squadron, divided into three formations with separate assignments, flew out along routes chosen to avoid known flak concentrations. Losses began soon as the bombers reached the European coast: two bombers turned back after one flew too low and struck water, losing its explosives, while another had its radio damaged by antiaircraft fire. Then a third bomber was shot down, a fourth went down after striking electric pylons, and a fifth crashed after flying into power lines. At the Mohne dam, Guy Gibson made his attack run, then flew his Lancaster across the dam to draw antiaircraft fire while other bombers made their approaches. One Lancaster was lost and another damaged, but the dam was finally breached after the fifth bombing run. Gibson then led the planes that still had bombs to the Edersee dam, which was undefended.

Unfortunately, the angle of approach was difficult, and made even more hazardous by fog. After numerous aborted runs, the Edersee dam was finally breached. The attack on the Sorpe dam failed. The breached dams resulted in a flood that killed about 1700 civilians, of whom 1000 were forced laborers. The greatest impact was the loss of hydroelectric power to factories and residences in the Ruhr for two weeks, as two power stations were destroyed and seven more damaged. Coal production also dropped, declining 400,000 tons that month. The damage was not permanent, however, and two months later, the Ruhr was back to normal. The raid nonetheless gave a boost to British morale as an impressive feat of derring-do, Guy Gibson was awarded a Victoria Cross, and 617 Squadron, known thereafter as the “Dam Busters”, went on to fly further successful special raids.

4. Japan’s Most Produced Bomber of the War

The Imperial Japanese Navy’s main land based bomber of WWII, and Japan’s most produced bomber of the conflict for that matter, was the twin engine Mitsubishi G4M Betty. A medium bomber, the Betty was first test flown in 1939, and entered operation service in 1941. The plane’s main assets were speed and exceptional long range – it was designed to fly 2300 miles with a bomb load, and could do 3500 miles without. That made the Betty difficult to intercept when used as a medium or high altitude bomber.

However, as was the case with Japan’s Zero fighter, the Betty’s speed and range were bought by making the plane as light as possible, at the expense of basic protections such as armor plate and self-sealing fuel tanks. As a result, Bettys easily went up in flames when their fuel tanks were hit, earning them nicknames such as the “flying Zippo” or “type one lighter” by both friend and foe. But if it did not catch on fire – a major if – the Betty was otherwise quite resilient, capable of surviving significant damage.

3. The Betty in Operation

The G4M Betty’s role was not limited to level bombing: it also made a pretty good torpedo bomber, and it was in that role that Bettys sank the British battleships Repulse and Prince of Wales in the war’s early days. However, the low, slow, and steady approach required for torpedo launch took away the Betty’s speed advantage and made it and its readily flammable fuel tanks vulnerable to defensive fire. The G4M bombers wreaked considerable havoc during the war’s first year, inaugurating the Japanese conquest of the Philippines by devastating Clark Field, America’s main airbase in the islands, on December 8th, 1941; sank the Prince of Wales and Repulse off the Malayan coast two days later; and ranged the breadth and width of the Pacific, utilizing their long range to bomb far flung targets from Australia to the Aleutians.

However, once American fighters and trained pilots began flooding into the Pacific, the Betty’s vulnerability when flying without fighter protection was exposed. While speed and range made interception difficult, when Bettys were intercepted they suffered heavily. Redesigns reduced the vulnerabilities by introducing plate armor and self sealing fuel tanks, at the cost of reduced speed and range. However, by then Japan was well on the way to losing the war, and the improved Bettys were flying with negligible fighter cover against swarms of US fighters. By war’s end, Bettys had been reduced to suicide bombers, or as launch platforms for missiles piloted by suicide flyers.

2. The Massive Allied Deception Campaign to Wrong-Foot the Germans

The amphibious invasion of France in WWII in the teeth of German resistance was going to be a risky affair – one that could easily end in disaster for the Allies. Landing troops in Normandy would just be the start of it. Ultimate success would depend on whether the Allies would be able to pour enough troops into their Normandy beachhead to make it invulnerable to counterattack, or whether the Germans would be able to nip the beachhead in the bud. The Germans had many troops in France, and powerful panzer divisions near Normandy that could be concentrated against the Allied beachhead before it was secure. It was going to be iffy, so before giving the go ahead for D-Day, the Allies’ supreme commander in Europe, General Dwight D. Eisenhower, prepared a statement accepting all responsibility in case of failure.

Time for an Allied buildup in Normandy was going to be a precious commodity. To buy that time, Allied intelligence came up with Operation Bodyguard, a multifaceted and complex plan to deceive Hitler about the time and location of the invasion of Europe in 1944. The plan had three goals. First, conceal the actual time and date of the invasion. Second, convince the Germans that the main invasion would land in the Pas de Calais. Third, convince the Germans after the Normandy landings to maintain a strong defense in the Pas de Calais for at least two weeks, rather than send its defenders to Normandy.

Operation Bodyguard had a sub-plan, Operation Fortitude, that created a fictitious “First US Army Group” (FUSAG) in southeast England under the command of General George S. Patton. Various means were used to sell Hitler and his generals on FUSAG’s existence. Fake radio traffic was used between fictitious FUSAG units. German reconnaissance planes were allowed to fly over and photograph concentrations of FUSAG tanks and transports that were actually just inflatable dummies. German intelligence was fed fake reports via double agents and turned spies about FUSAG’s intentions to invade the Pas de Calais, in order to tie down the German defenders there. A subsidiary, Fortitude North, created a fictitious British Fourth Army in Scotland, and convinced the Germans that it planned to invade Norway in order to tie down German defenders there.

After D-Day, Bodyguard succeeded in convincing the Germans that the Normandy landings were not the main event, but the first in a series of landings. Hitler was thus led to keep units guarding other potential landing sites. Especially in the Pas de Calais, which was threatened by the fictitious FUSAG under Patton. Bodyguard had hoped to convince the Germans to stay put in the Pas de Calais for two weeks after D-Day, instead of immediately sending the units there to reinforce Normandy. The plan worked so well that the Germans stayed put in the Pas de Calais for seven weeks instead of the hoped-for two. That allowed the Allies time to build a beachhead in Normandy, before breaking out to liberate France and Western Europe. As Winston Churchill put it in his memoirs: “In wartime truth is so precious, that she should always be attended by a bodyguard of lies“.

Daily Beast – These Black Soldier Fought For America. It Didn’t Protect Them From Jim Crow

Hervieux, Linda – Forgotten: The Untold Story of D-Day’s Black Heroes, At Home and At War (2015)

Imperial War Museum – The Incredible Story of the Dambusters Raid

Mountbatten, Louis – Combined Operations: The Official History of the Commandos (2007)