Today in History: D-Day: The Liberation of Western Europe Begins (1944) 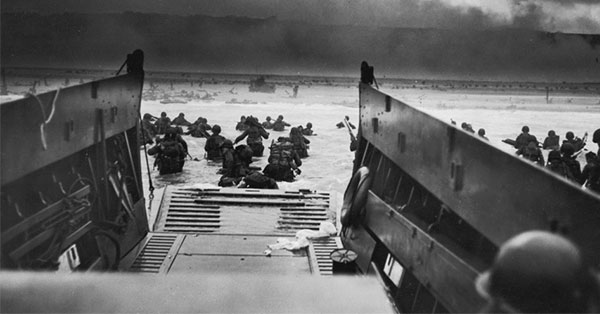 Today in History: D-Day: The Liberation of Western Europe Begins (1944)

D-Day 1944 was the largest seaborne invasion ever to be attempted. The planning for Operation Neptune (and subsequently Operation Overlord) began in 1943. Over the next year, the Allies worked to coordinate a huge invasion while keeping the Germans in the dark.

In order to do this, they ran Operation Bodyguard, which was meant to keep the date and location of the landings a secret from the Germans.

With the landings at Normandy, the Allies truly began their liberation of Western Europe. It would be this beginning that would lead to the Allies’ victory on the Western Front. By September of 1944, the Allies had freed Northern France and had begun the operation to invade Germany.

In order for the War to turn out in the Allies’ favor, the military leaders knew that the invasion of Western Europe had to be both big and successful. On June 5, 1944, US General Dwight D. Eisenhower gave the order to commence Operation Overlord. In a message to troops prior to the launch of Operation Overlord, he wrote:

“You are about to embark upon the Great Crusade, toward which we have striven these many months. The eyes of the world are upon you. The hopes and prayers of liberty-loving people everywhere march with you. In company with our brave Allies and brothers-in-arms on other Fronts, you will bring about the destruction of the German war machine, the elimination of Nazi tyranny over the oppressed peoples of Europe, and security for ourselves in a free world.”

By the end of the day, 155,000 troops had successfully stormed the beaches of Normandy and were preparing to continue the invasion into Northern France. It was a decisive Allied victory that would come to mark the true beginning of the end of the war on the Western front. By May of 1945, World War II would be over in Europe.

While a huge success, not everything went to plan for the Allies. One failure was that the Allies failed to land all of the supplies and vehicles that they had intended to go to France. They also lost around 10,000 men (nearly 4,500 of them fatalities).

From the German side of things, the invasion by the Allies was a disaster. Their only hope had been the leadership of Field Marshal Erwin Rommel, but he was on leave at the time of the invasion. Hitler compounded the problems by refusing to send in reinforcements as he believed the Normandy landings to be a feint meant to hide a larger invasion north of the Seine River. He also refused to send in armored vehicles and the troops associated with them.

By the end of June, and with the control over the beaches of Normandy fully within their control, the Allies were able to send in over 850,000 men into Western Europe, along with 150,000 vehicles to support them.