This Notorious WWII Aircraft Was Crowdfunded By The British People 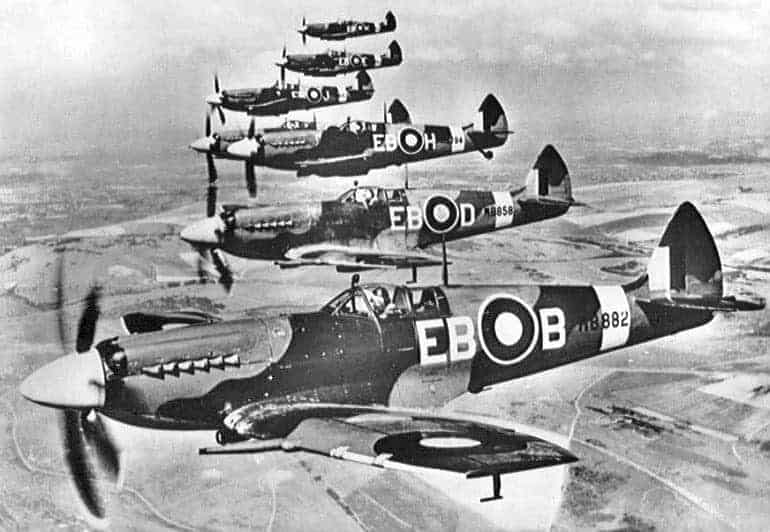 This Notorious WWII Aircraft Was Crowdfunded By The British People

The Spitfire, or the Supermarine Spitfire, was the most highly-produced British aircraft during World War II. The single-seat fighter was not only victorious throughout the Battle of Britain from 1940-1941, but it also served on every front of the war — just like the Hawker Hurricane. Because of this strategic success, the Spitfire had more variants than any other British plane.

The Awesome Design and Power of the Spitfire

Reginald Mitchell of Supermarine Ltd. designed the infamous aircraft after the Air Ministry demanded a higher-quality, better-performing fighter in 1934. It had to be equipped with eight wing-mounted machine guns at 0.303 inches (7.7 mm). A year later, the Spitfire flew with a 1,000-horsepower, 12-cylinder, liquid-cooled Rolls-Royce PV-12 engine. This powerful engine was later referred to as the Merlin. It was similar to the Hawker Hurricane, but its structure was stressed-skin aluminum, which was much more radical.

The shell was paired with a thin airfoil elliptical wing. The combination of the supercharger Merlin and the graceful design, the Spitfire’s performance was extraordinary with superb flight characteristics. The wingspan was 36 feet and 10 inches (11.2 meters) with a length of 29 feet and 11 inches (9.1 meters). Its maximum speed topped out at 360 miles (580 km) per hour at a ceiling of 34,000 feet (10,400 meters).

During the Battle of Britain, the slightly-slower Hawker Hurricane could focus on the German bombers whereas the quick Spitfires would attack the enemy fighters.

This is why the Hurricanes were credited with more kills, but the Spitfires secured the marginal victory thanks to its high-altitude performance. Variants of the Spitfire were developed over the war including the exchange of eight machine guns for four 0.8-inch (20 mm) automatic cannons and an accelerated 1,760 horsepower.

Although it was overpowered by opponents during World War II a few times, it continued to be an active presence during air-to-air combat during the early 1940s. In 1942, Spitfires fought in North Africa and Italy. The following year, they ruled the air over the beaches of Sicily and Normandy, and even went into the Far East. During their flights, the Spitfires were armed with three 250-pound bombs.

By the end of 1943, the Spitfire could reach a ceiling of 40,000 feet (12,200 meters) and a speed of 440 miles (710 km) per hour thanks to its updated Rolls-Royce Griffon engine with 2,050 horsepower. They were perfect for shooting the V-1 buzz bombs. As World War II continued, Portugal, Turkey, and the Soviet Union all accessed Spitfires because of small exports. The U.S. Army Air Forces also used them throughout Europe.

The Money Used to Build Spitfires

The Spitfire is notorious for its one-of-a-kind silhouette and sheer power because of the growling engine, but many people do not realize that the popular World War II aircraft was crowdfunded. That is to say, the British people themselves raised the money to pay for the production.

World War I was a huge expense for Britain, which finally ended in 1918. The Great Depression followed shortly after in the 1930s. Therefore, the country literally had hardly any funds. The government avoided war because of their poor shape. However, it was clear that Hitler’s Nazi regime was taking over by the 1930s. Without enough money to upgrade their equipment, the British Armed Forces were in a sad state. Baron Beaverbrook was an Anglo-Canadian media mogul and Lord Max Aitken. He was recruited by the British government to help speed up the aircraft production in 1940.

Lord Beaverbrook immediately used his media experience and created a public appeal. He urged British men and women to source materials and resources for building and encouraged them to also save their money to help pay for the war.

The plan worked, and the word got out to the British citizens. Donations began pouring in because of the commercials. A fictional £5,000 price tag became associated with the Spitfire Funds. This number was not accurate, but it seemed attainable to the average people. Once again, the plan worked.

Paul Beaver, an aviation historian, talks about the generous donations and claims, “The Spitfire Funds were a home front phenomenon. The aircraft and the idea of buying one seemed to hit the national psyche. Britain wanted to believe in something and the Spitfire, that combination of beauty and power, was the great savior.” Everyone was on board for raising money. Collections were set up all over Britain from churches and schools to business and councils.

Donations ranged from children’s pennies to hundreds of pounds. In the end, about £13 million was raised, which equals £650 million with inflation in 2017. The money was collected in numerous ways over the months. After the Battle of Britain had proved the Spitfire a success, the public became even more passionate about earning funds. It was prideful to have a national aircraft produced because of your funds.

A simple method of getting people involved was to break down the cost of the plane. For example, if you donated eight shillings, you could “buy” one spark plug. No amount was too big or too small, either. A rivet equated to a sixpence whereas a gun was valued at £200 and the wings cost £2,000. Newspapers began printing the names of donors. It was common to see an elderly man donating 10 shillings or an entire station lane to give a large fund.

The BBC started broadcasting names of groups who raised £5,000, which inspired more public donations. It became such a craze that the common, war-torn folks of Britain contributed to nearly €1 million a month. People were told a dedication would be painted on the nose of the Spitfire, which prompted whole towns to raise money. Every major post in Britain wanted its ‘own’ aircraft. It was such a big deal that the councilor of Lytham St. Annes noted, “If we should have a dogfight over Lytham St Annes let us have a Spitfire of our own to deal with it and not have to send to Fleetwood or Blackpool to borrow theirs.”

Market Lavington, a small town in Wiltshire, wanted to keep up with its larger neighbors. The townspeople came up with the idea to draw an outline of a Spitfire in the center square. Residents were asked to fill it will coins, which only took a couple of days to complete. A bold farmer marketed his land claiming it “the only field in Kent without a German aircraft in it” and charged sixpence for each visitor to take a look. Carnivals and circuses also collected money for their plane ‘Fun of the Fair.’

The Kennel Club included Britain’s four-legged friends in the fight to earn money, too. They named their Spitfire ‘The Dog Fighter.’ A cinema manager collected money in a wheelbarrow during standard air raids in the capital. He coaxed people that the more money they have to build Spitfires, the fewer the raids. That same manager earned enough funds to name four Spitfires all ‘Miss ABC.’

Lord Beaverbrook received tons of mail donations including one from Patricia Boncey that stated, “When my mummy has taken me out and I have wanted to use a public convenience she has had to pay a penny. So I thought if we did the same at home it would help your fund.” Enclosed with the letter was 15 shillings. British retail chain Woolworth’s donated enough money for two Spitfires and named them ‘Nix Six Primus’ and ‘Nix Six Secundus’ because they took pride in keeping their prices below sixpence.

You can only image where the name ‘Dorothy of Great Britain and Empire’ came from: a group of women all with the name Dorothy, of course. Global donations came from The Red Cross, who helped the prisoners of war donate their funds back home. British soldiers imprisoned at Oflag VIB named a Spitfire ‘Unshackled Spirit’ after donating an entire month’s pay. Countries like Uruguay and Trinidad gave numerous planes despite remaining neutral during World War II.

In the 21st century, crowdfunding is a favorite source of fundraising. However, some of these public methods would not work in today’s time. Even back then the donation frenzy was no stranger to con artists and scammers. Those who were charged with fraudulent activity relating to the Spitfire funds received appropriate punishment. Despite the fact that 2,600 planes were produced as a result of donations, it is hard to keep track of who donated what. Historical records provide inadequate details about tracing the planes to the rightful donors.

In fact, it is rather unlikely that every coin was used for the direct contribution of building the aircraft. After all, the donations were not taken directly to the factories. Nevertheless, they should be very proud of themselves. The donations were dispersed throughout the government and ultimately were used to support the war effort, which is what the people wanted to do anyway.

The various fundraising methods boosted morale during a time of hardships. The British men and women felt as though they were doing their part to help their country. Even if they were not fighting directly on the forefront of a battle, they cared about their brothers and sisters who were, and did what they could to support them.

The British people watched Spitfires fight the enemy and protect their country; they knew they had purchased these planes. Mark Harrison is a professor of economics at the University of Warwick. He best describes the unique situation as this: “Spitfire funds did not pay for Spitfires, but they were still an essential part of the war effort. Without them, the war would eventually have gone less well in one aspect or another. There would have been a cost.”

Production finally ceased in 1947. Over 20,000 aircrafts of each Spitfire version had been produced and another 2,000 with the Griffon-powered engine. The RAF continued using the fighter and photo-reconnaissance Spitfires until the early 1950s.