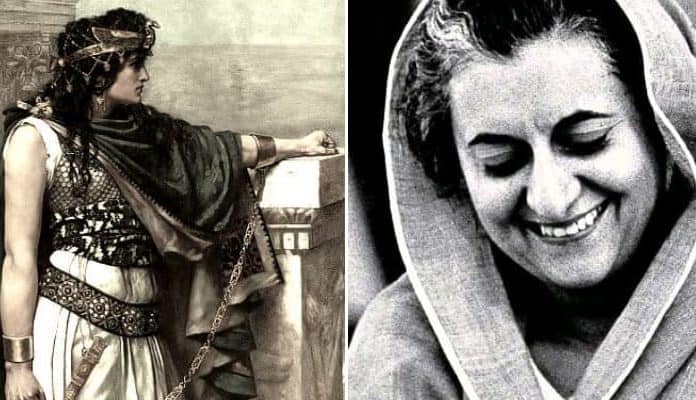 Despite the social restrictions placed on women throughout history, queens, consorts, concubines, and even female military commanders have, throughout recorded history, risen from time to time to positions of great power. Not all human societies, modern and ancient, have been structured around the dominance of the male gender, but most have, and the result has tended to be that women have had to work harder, play harder and fight harder to rise to the top.

In more modern history, however, the rise of powerful women to positions of power has tended to be more limited. Ironically though, in regions and countries where women are traditional extremely disadvantaged, female leaders have more commonly emerged. Examples of this are, of course, Benazir Bhutto of Pakistan, Indira Gandhi of India, Corazon Aquino of Philippines and Ellen Sirleaf Johnson of Liberia. In 1979, Margaret Thatcher broke ground when she won the British general election, and emerged as one of Britain’s greatest modern leaders.

Deeper in history, however, from Boudica to Joan of Arc, and from Elizabeth I to Catherine the Great, women have held positions of enormous power, typically in an hereditary sequence, but often also in coups and seizures. We have selected a cross section of powerful women of history to showcase and celebrate some of these extraordinary women.

We are going to kick off with a more recent female power broker, the ‘chain-smoking grandmother’, Golda Meir. Known to have an acerbic wit and cruel turn of phrase, perhaps her most famous remark was ‘don’t be so humble, you are not that great’. There is no record of who was on the receiving end of this, but whoever it was probably left her office with food for thought.

Golda Meir  was a Ukrainian Jew born in Kiev in 1898. In 1906 she and her family emigrated to the United States. This was to escape uncertain times in the Russian Empire, and in particular in Ukraine, where anti-Semitic pogroms were a regular feature of life. Her political consciousness became evident very quickly, and she as active in the suffragette movement as well as trades union. Her rise to prominence began, however, when she became involved in the emerging Zionist movement.

Zionism, or Jewish Nationalism, grew out of the determination of the European Jewish diaspora to reject centuries of marginalization and persecution, in particular in Eastern Europe. A group of European Jewish nationalists decided that no solution other than an independent Jewish homeland would truly protect the Jews.

Golda Meir, as a young student in the United States, was deeply involved in the development of this movement. There were numerous suggestion for where this homeland would be, from Argentina to Uganda, but the most obvious was the ancient land of Israel. After WWI, Palestine was taken over by the British as a mandated territory, and the British on the whole were very encouraging of these Zionist ambitions.

After WWI, Gold Meir and her husband joined the steady flow Jewish immigrants to Palestine, and there they settled on a Kibbutz. In the leadup to the United Nations partition, and the Jewish seizure of greater Israel, Golda Meir was actively involved as an organizer and a fundraiser, using her American connections. David Ben Gurion, Israel’s first Prime Minister, described Golda Meir as ‘the Jewish woman who got the money which made the state possible.’

When Israel declared its independence in 1948, and triumphed in the war of that year, Meir, now fifty-years-old, and one of twenty-four signatories to the declaration of independence, entered briefly on a diplomatic career. Thereafter, she held various government portfolios before her election to the premiership in 1969.

She led Israel through arguably its most difficult years. For example, she was Minister of Foreign Affairs during the defining Six-Day War of 1967 and the Yom Kippur war of 1973. The latter almost saw Israel overwhelmed by a coalition of Arab forces, and as her minister of defense, Moshe Dayan, was gnawing his fingernails in despair, predicting doom, she was working the phones, and eventually, it was US military aid the won the day.