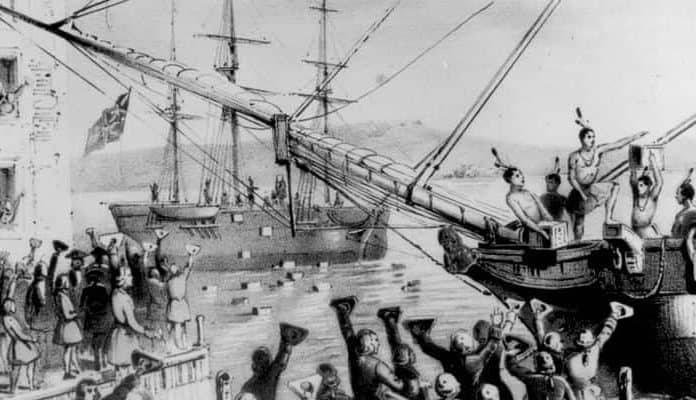 British traders received permission to send ships to the Indian Ocean from Queen Elizabeth I near the end of the 16th century, with the expressed intent of taking trade away from the Dutch, French, and Spanish. On the last day of 1600 a group of merchants received a charter from the queen to trade as the Governor and Company of Merchants of London Trading with the East Indies. The charter granted them a fifteen-year monopoly on trade from the Cape of Good Hope east to the Straits of Magellan. It was the birth of what became the British East India Company. It would grow to control over one-half of all trade in the world.

It would also grow to have its own army, which by 1800 was twice the size of the British Army, using largely colonial troops. Its navy included armed merchantmen, privateers, and warships captured from enemy fleets. It conquered and controlled, through its army and company administrators, large swathes of the Indian Subcontinent. Its power, in trade and in military affairs, was unlike any business operation in history before or since. It became known as the British East India Company, though it was referred to as the John Company colloquially. Despite its immense power, or perhaps because of it, it was frequently troubled financially. Here is the story of the British East India Company.

1. Sir Walter Raleigh captured a ship which proved how lucrative the India trade could be

In 1592 Sir Walter Raleigh and George Clifford, Earl of Cumberland, captured a Portuguese ship involved in the India trade. The ship was brought to Dartmouth, where its cargo made a sensation. Besides being heavily laden with gold and silver coins, the ship carried pearls, gems, silks, tapestries, numerous spices, and other exotic cargo, all highly prized and highly valuable. It also carried what was essentially a guidebook to dealing with the ports of the east. While anchored at Dartmouth the ship was the target of thieves on multiple occasions, before Raleigh could establish sufficient security almost two-thirds of its loot was stolen. But the handbook remained in custody.

The seizure was the impetus for Queen Elizabeth to grant permission for English ships to travel to the east, increasing the Royal Treasury through the granting of licenses which ensured a financial return. With additional ships being brought in carrying valuable cargoes, English merchants and shipowners formed the consortium which petitioned Her Majesty for the Royal Charter, arguing the Crown would be better served through a licensed monopoly. The Crown agreed. Anyone desirous of trading in the Indies needed a license from the new East India Company; violators found their ships and cargoes forfeited to the company (with half of the value of both sent to the Royal Treasury).