The Mysteries Surrounding Roanoke Will Give You Chills 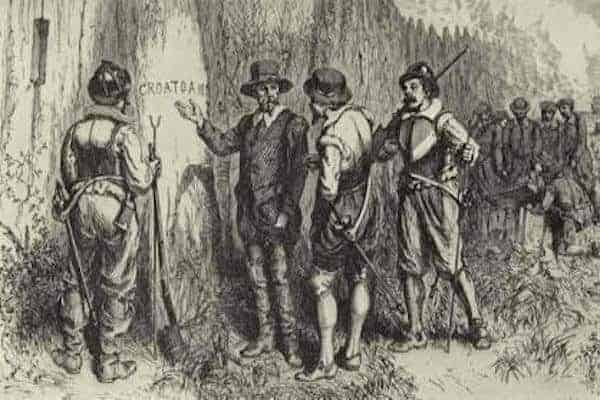 The Mysteries Surrounding Roanoke Will Give You Chills

Today, it’s hard to find an inch of the world that isn’t mapped. In moments, you can view a photo of the most remote spot on the globe with a satellite. And of course, that makes it hard, if not impossible to really understand the fear that people used to feel towards the un-visited corners of the world. In the face of the unknown, imagination runs wild. Our minds fill the shadows of the blank spaces on the map with monsters and savage people who drink blood and eat human flesh. And for the English in the 16th century, America was just such a place.

Though the continent was already inhabited, and the Norse had even established a short-lived colony there four hundred years earlier, North America remained a mystery to most of Europe. But there were early signs that colonization could be very profitable. With the natural resources of the continent, there were enormous potential profits for any country that could control it. Before they could, they would have to wrestle it from unforgiving nature. In 1585, Sir Walter Raleigh moved to establish the first major British settlement in what is now the United States. But from the beginning, there were problems.

Shortly after leaving England, one of the ships became separated from the others. And after they met up again in the Carribean, one ran aground on a shoal, ruining much of the colonists’ food supplies. The fleet continued up the coast of what is now North Carolina, seeking the perfect spot for a new colony and making contact with the native tribes in the region. Immediately, the relationship between the colonists and natives was strained when the Europeans accused a native of stealing a silver cup. In typical 16th-century style, the English sacked and burned down their village in response.

And looting was actually a big part of the expedition. The plan was to establish a colony, and once that was done, take the ships for a little harmless privateering against Spanish shipping. By August, the leader of the expedition, Sir Richard Greenville, was getting impatient for the more profitable second phase of the mission. So, when he discovered the small island of Roanoke, he declared that it would make the perfect spot for a colony and ordered the settlers off the ships. Many argued that they didn’t have enough food and were now surrounded by – understandably- hostile natives. But Greenville promised that he would return soon with reinforcements and supplies.

107 men settled at Roanoke and immediately began building a fort to protect themselves from attack. Months went by with no sign of Greenville. In June of 1586, a force of Native American warriors launched an attack on the English garrison in revenge for the burning of their village. The garrison managed to hold them off. And shortly after, Sir Francis Drake happened to pass by the colony and offered anyone who wanted it a lift back to England. A number of men took him up on the offer. But when Greenville finally returned, he found the remaining men had vanished. It was an ominous warning of what was to come.

Greenville left 15 men to guard the remains of the colony and sailed back to England. Not one to give up, Sir Walter Raleigh dispatched another group of colonists in 1587. This time, it would be in the more forgiving Chesapeake Bay area. But first, they needed to stop and pick up the 15 men Greenville had left behind. The colonists landed at Roanoke in July, only to be greeted by an eerie silence. Once again, the people left at Roanoke had vanished.

The only sign of what happened was a single skeleton, but no one was sure that it had actually belonged to one of the men. The colonists decided that it would be best to get off of the island as soon as possible. But the captain of the ships refused to let them back on, demanding that they stay and found the colony at Roanoke. The decision to stay there had probably already been made back in England without informing the colonists. The colonists, led by John White, decided to make the most of it. And over the next few months, they began planting crops and building houses.

Deciding that hostile relations with the natives weren’t helping the prospect of long-term survival, now-Governor White organized a peaceful meeting with the local Croatan tribe. But many of the other tribes in the area refused to meet White. And a few weeks after arriving, one of the colonists was killed by Native Americans when he was hunting for food along the shore. Over the next few months, the situation rapidly grew worse. The colonists struggled constantly with hunger and disease. The one bright spot was the birth of Virginia Dare, the first English child ever born in America.

By winter, the colonists decided that White should sail back to England and ask for help. The voyage was risky, especially in winter, but White knew that without help, the colonists would die. White made it back, but the same year, England and Spain went to war. The war meant that it would be three years before White could make the return to Roanoke. He set foot again in the New World on August 18, 1590. It was Virginia Dare’s third birthday. But if White hoped for a joyful reunion, he was immediately disappointed. Once again, the colony was completely silent.

White searched through the decaying buildings and overgrown fields, but there was no sign of any of the more than 90 people he had left behind three years earlier. There was no evidence of a struggle. None of the buildings had been burned. There were no sun-bleached skeletons lying in the overgrowth. It was as though the colony had simply vanished. Before he left, White had told the colonists that if anything happened to them, they should carve a cross on a tree. Now, he searched for crosses. There were none. Only a cryptic message carved into the wood of a nearby tree: Croatoan. But what did it mean? And what happened to the people of Roanoke?

White thought that the message meant that the colonists had moved to the nearby Croatoan Island. But before he could make the voyage there, a fierce storm blew in. And his sailors demanded that the ship leave before it was sunk. White traveled back to England and tried to arrange another expedition, but it would be more than a decade before anyone could make a serious attempt to find out what happened. An expedition was finally launched in 1603, but most of the crew was killed by natives before finding anything.

It wasn’t until the settlement of Jamestown was established in 1607 that anyone found a clue as to what might have happened. That year, Captain John Smith, leader of the colony, met the leader of a nearby tribe. The chief claimed that he had personally led an attack on the Roanoke colonists because they had allied themselves with an enemy tribe. It seemed like a reasonable explanation. A group of colonists in a strange land, who had been enemies with the local natives since almost day one, finally met their end in a native attack. But the theory has never satisfied everyone.

First, there was no obvious evidence of an attack at the site. And many have argued that the chief was probably talking about the 15-man garrison left at Roanoke before the colonists arrived, who did appear to be wiped out in an attack. Not to mention that other tribes told different stories about what happened to the colonists. One tribe reported that they saw the colonists fighting among themselves in a miniature civil war. Seemingly abandoned by White, the colonists might have come to blows over the remaining food. The survivors might then have buried the dead and relocated to Croatan.

There’s also the possibility that “Croatoan” didn’t refer to a place, but to a people. It might have been a message that the colonists decided to live with the nearby Croatan tribe. There’s a chance that the colonists made friends with the natives who, seeing that the colony was failing, offered to take them in as guests. And there is some evidence for this. Later visitors to the area reported that there were many words in the native languages that resembled English words. Others reported that the natives lived in two-story wooden houses that looked quite English, and they claimed to have learned to make them from the Roanoke colonists.

But there’s a much darker possibility lying inside this scenario. Slavery was common among tribes in the area. And if the colonists did decide to join the Croatan, then it might not have been as guests, but as slaves. Later European visitors in 1612 reported seeing European slaves living among the natives, where they were forced to beat out copper tools. And of course, as always, there are more outlandish theories as well, ranging from zombie outbreaks to alien abduction. Ultimately, we’ll probably never know what happened to Roanoke, and it will remain one of history’s most tantalizing mysteries.

We Finally Have Clues to How the Lost Roanoke Colony Vanished”. Andrew Lawler, National Geographic. August 2015.