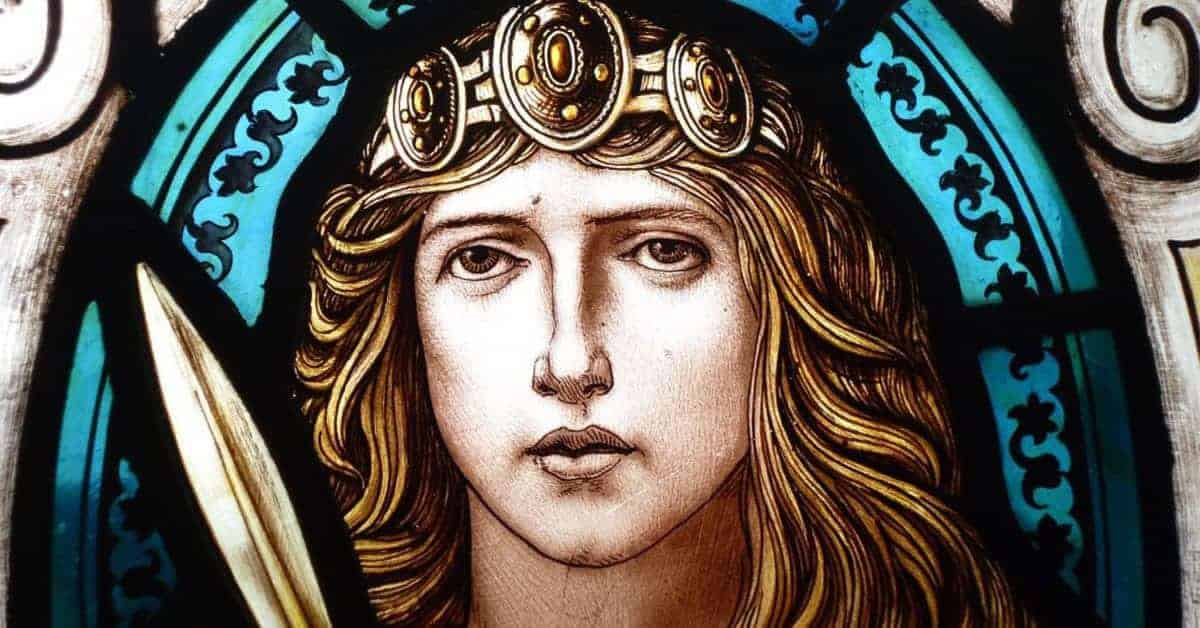 On the north side of London’s Westminster Bridge stands a great nineteenth-century sculpture: “Boadicea and Her Daughters“. The embodiment of triumphant victory, it portrays the fearsome Iceni queen mounted on a scythed chariot, her spear aloft. With her stature and expression, she at once strikes the figure of unbridled feminine rage, Amazonian militarism and fierce maternal protection. At one point or another over the long course of her mythologization, she has come to represent all of these things.

According to the ancient sources—more on these a little later—Boudica was the wife of Prasutagus, the king of the Iceni; a Celtic tribe from modern-day East Anglia. When Prasutagus died in 60 AD, he left half of his estate to his two prepubescent daughters, and half to the emperor Nero (this was common practice under bad emperors as it could hedge against them decided to take everything). However, the Roman administration ignored Prasutagus’s bequest and claimed everything for the empire. In Tacitus’s version, centurions ravaged his lands while Roman slaves pillaged his property, flogged his widow Boudica, and raped his daughters.

Even for Roman standards, this treatment was abhorrent, especially considering that, through their relation to Prasutagus, Boudica and her daughters were most likely Roman citizens. To avenge this wrong Boudica rallied the Iceni, the Trinovantes and a number of other British tribes, and started a revolt.

She moved first on Camulodonum, modern-day Colchester. It lacked a single fortification, so taking and sacking the town—along with its despised Temple of Claudius—wasn’t too difficult. Nor was massacring its inhabitants, who consisted primarily of retired Roman veterans and native pro-Roman sycophants.

From there they moved on to Londinium, modern-day London. It had briefly been garrisoned by a small Roman army under the command of Suetonius Paulinus who, upon hearing of the revolt, had marched down from where he’d been stationed in Anglesey. But realizing his forces were inadequate for the task at hand he retreated from the city before the arrival of Boudica’s army. Her army completely destroyed Londinium, along with the town of Verulamium, modern-day St. Albans, burning them both to the ground and killing them indiscriminately.

If we believe the ancient figures, the total death toll of both Britons and Romans alike were staggering: some 70,000 – 80,000 dead. More than the numbers though were the ways they were murdered. Noblewomen were hanged upside-down and their breasts cut off and sewn inside their mouths before being killed, impaled on sharp stakes that penetrated the length of their bodies.

This was a grave affront to the cohesion of the Roman Empire, and it was imperative that the revolt be crushed immediately. The man entrusted with this task was Suetonius Paulinus who, with his heavily outnumbered Legio IX Hispania, met Boudica’s army (modern archaeologists think somewhere in the West Midlands near Rugby) in 60 or 61 AD.

The 230,000 or so Britons made a fierce display as Boudica paraded before them in a chariot, delivering a tirade of how she and her daughter had been defiled and promoting the justness of their cause. Meanwhile Suetonius Paulinus gave another, altogether much more Roman, speech: point and thrust lads, the barbarian’s bravado will soon shatter when faced with disciplined Roman steel. The Briton’s confidence and bravado did indeed prove their downfall: they suffered a decisive crushing victory, made worse by the fact they had bought their families along to watch. By the end of the day, Tacitus tells us, 80,000 Britons lay dead.

Boudica retreated from the battle and died soon after. Some say she followed in the footsteps of Cleopatra by poisoning herself, while others say she died from grief. But it was not the manner of how she died that would long continue to haunt the Romans, but rather the manner of how she’d lived. Her rebellious spirit is indeed what’s central to Boudica’s story. And it is story, rather than history, that may well be the optimal word for Boudica. For when we start scratching around for any concrete, historical traces of Boudica, even the very existence of this famed warrior queen becomes more a question of conviction than corroboration.

Let’s start with the archaeological evidence. Problematically, we have nothing that links any figure called Boudica with the events described in the written sources. The closest thing we have is a coin issue with the inscribed letters SUB ESUPRASTO ESICO FECIT: something that may or may not refer to Boudica’s late husband, Prasutagus. There’s an archaeological layer of burnt deposits showing that St. Albans was sacked around the time of events described. But while they might say something of a battle—though not the final battle, the site of which has yet to be found—they say nothing of Boudica herself.

Without any strong archaeological traces, we’re forced to rely on our written evidence. There are, in fact, three ancient sources of this kind for Boudica’s reign, none of which were contemporary. Two come from the great Roman historian Tacitus: the first appearing in his work the “Agricola” (a biography about his father-in-law who was stationed in Britain) and the second appearing in his later work the “Annals” (which gives us most of our information about the early emperors).

Tacitus was writing around half a century later but is still considered more or less reliable. The other evidence comes from a much later, and less reliable author, Cassius Dio, who wrote a history in Greek about 150 years after the events described. Cassius Dio doesn’t give us much context around Boudica’s revolt. We don’t know exactly who his sources were, though it’s safe to assume that he based much of his account on Tacitus’s. What he does give us, however, is the only physical description we have of Boudica, or of any ancient Briton for that matter:

In stature, she was very tall, in appearance most terrifying, in her glance of the eye most fierce, and her voice was harsh; a great mass of the tawniest hair fell to her hips; around her neck was a large golden necklace, and she wore a tunic of diverse colors over which a thick mantle was fastened with a brooch. This was her invariable attire.

Cassius Dio’s description is certainly evocative, portraying someone who is aggressively masculine and, for a Roman, captivatingly alien. But it also raises a lot of questions, the most pressing of which relates to how he possibly could have known this. There were no coins with Boudica’s image. No statues have been found, or mosaics or any other type of artwork. True, he could have based it on an eyewitness source, but it’s difficult to imagine any Roman would have seen or heard her addressing her troops from a chariot, nevermind been able to identify what she had been wearing (and, for that matter, always wore).

We arrive closer to understanding the true Boudica when we think about how the ancient’s viewed history. History writing was more of an art than a science in the ancient world, and when it came to producing artworks Tacitus, more than Cassius Dio, was a true master. One of Tacitus’s signature techniques was to use events in the provinces to further his overall agenda: showing how corrupt and decadent Roman politics and culture had become. So, if we take the reign of Emperor Nero for example, we can see how Tacitus juxtaposes the vain, artistic pretensions of the emperor with the loyalty, nobility and militarism (all good honest Roman values) of his general Corbulo in Armenia.

But Nero wasn’t even Tacitus’s most odious character. If there was one thing a member of the Roman elite hated more than a powerful man, it was a powerful woman, and up until her murder in 59 Nero’s mother, Agrippina, had been the most powerful person on the planet. She’d achieved such power through sex, firstly with her uncle, the former Emperor Claudius, and then allegedly with her son, Nero. She then wielded it through secrecy and manipulation. It was even said that she would listen in on senatorial meetings—something unthinkable for a woman to do—from behind a curtain.

Where does Boudica tie into this? The answer, I’d suggest, is that she becomes a lot more comprehensible when we think of her as a literary device—as an antithesis to Agrippina—rather than as a historical figure. To clarify, I’m not suggesting that Boudica didn’t exist. To do so would be making a claim based on nothing other than the negation of evidence: bad historical practice. What I am saying is that the Boudica we think we know (that is the Boudica of our ancient sources) is too much the antithesis of Agrippina to be real.

The antitheses are striking: Where Boudica went to war to avenge her children, Agrippina was ultimately murdered by hers. Where Boudica led from the front, spear-in-hand like a true warrior, Agrippina led from behind the closed doors of the imperial palace. Where Boudica gave a rousing speech exhorting freedom over slavery, Agrippina was at the helm of a political institution that enslaved the Romans to a series of capricious emperors. Where Boudica ruled over an army of warriors, Agrippina ruled over decadent imperialists; too focused on their warm baths, their unmixed wine and their perfumes to care about proper Roman military values.

To reiterate, there’s little doubt in my mind that a British queen did exist who rose up against the Romans and came close to removing their foothold from the island. However, in terms of conduct, beliefs, even appearance, she would have born little resemblance to the figure that has come down to us today. The Boudica we know is too Roman; too much of a literary caricature: a foil to the manipulative Agrippina (or, for that matter, the all-singing all-dancing Nero who is so effeminate that Boudica herself calls him a woman). Short of any new and illuminating archaeological discoveries, uncovering the final battlefield perhaps, she is likely to remain just that.

Atlas Obscura – Boadicea and Her Daughters

Historic UK – Boudica and The Slaughter at Camulodunum