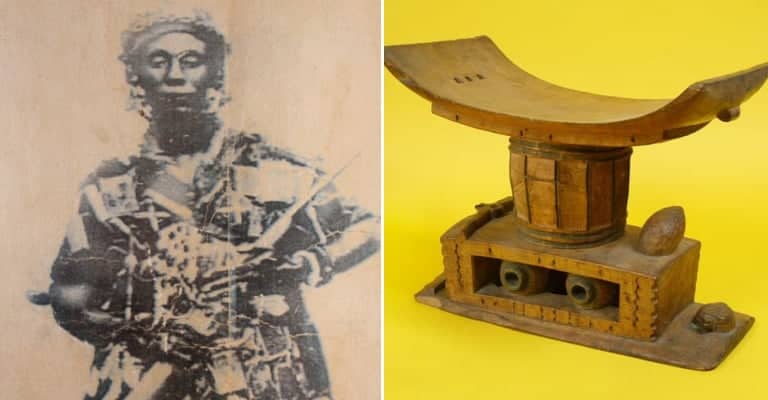 The woman who fights before cannons,

You have accomplished great things,

You have done well”

In 1900, the British governor of the Gold Coast in west Africa – today’s Ghana – travelled to Kumasi, capital of the Ashanti tribe. There, he delivered a provocative speech, in which he demanded that the Ashanti produce the Golden Stool, the tribe’s most sacred object, so he could sit upon it. Nana Yaa Asantewaa, an Ashanti queen mother, rallied her people into resistance, in what came to be known as the War of the Golden Stool. Thousands took up arms, and Asantewaa was appointed war leader of the Ashanti. The Ashanti were eventually defeated and annexed to the Gold Coast, but retained their autonomy. They also did not produce the Golden Stool.

Nana Yaa Asantewaa was born in 1840, into the royal line of the Edweso clan of the Ashanti Confederacy. The Confederacy was an African state founded in 1701 by an enterprising chieftain named Osei Tutu. The new state’s founding mythology revolved around the Golden Stool – a mystical seat that supposedly summoned from the sky by Osei Tutu’s chief priest, to fall into the lap of the Ashanti Confederacy’s founder, thus confirming his right to rule. The Golden Stool became the Ashanti state’s most sacred object, and its chief unifying symbol.

A century later, the British came into conflict with the Ashanti Confederacy. Britain’s African Company of Merchants began supporting rivals of the Ashanti, creating frictions that were inherited by Britain when it dissolved the African Company and took over its holdings in 1821. Continued support for Ashanti tribal enemies eventually led to violence and a war that lasted from 1823 to 1831. That conflict, which came to be known as the First Anglo-Ashanti War, was followed by steady skirmishing, which flared into open warfare four more times in the following decades.

It was against that backdrop of conflict between her people and the British that Yaa Asantewaa was born, raised, got married, and had a daughter. The elder of two children, Asantewaa became a major landowner and prosperous farmer in her region, cultivating a variety of crops in her fields. Her younger brother eventually became chief of Edweso, and when he died in 1894, Asantewaa used her position as Queen Mother to nominate and secure the succession for her own grandson. However, the eruption of yet another conflict with the British colonial authorities ended up disrupting her plans.

An Ashanti refusal to sign a letter consenting to become a British protectorate led to the Fourth Anglo-Ashanti War, a brief conflict that lasted from December of 1895 to February of 1896. It was a lopsided affair that was decided by overwhelming British firepower, in which Maxim machine guns and the latest in field artillery were pitted against spears and obsolescent muzzle loading firearms. The victorious British exiled the Ashanti king, Prempeh I, to the Seychelles islands in the Indian Ocean, along with his chief supporters.

Among those exiled was Yaa Asantewaa’s grandson, for whom she had secured the rule of Edweso. A strong ally of king Prempeh, the colonial authorities forced him to accompany his liege when they shipped him to the Seychelles. Asantewaa was compelled to step into his shoes and assume his place, ruling as regent during her grandson’s absence. None too fond of the British to begin with – as few Ashanti were – the exile of her grandson further alienated and soured Edweso’s regent and Queen Mother against the colonial power.

An Oblivious Governor Delivers One of History Worst Received Speeches

In March of 1900, the governor of Britain’s Gold Coast, Frederick Mitchell Hodgson, accompanied by his wife, travelled with a military escort to Kumasi, chief city of the Ashanti. There, he summoned the chiefs, and oblivious to their sensibilities, delivered a speech that greatly offended them: “Your king Prempeh has been exiled and will never return to you. His power and authority will be taken over by the British Queen and her representative. The terms of the 1874 peace treaty between the Ashanti and Britain, which required you to pay for the cost of that war, have not been forgotten. The Ashanti are required to pay Â£160,000 a year, plus interest. Then there is the matter of the Golden Stool of Ashanti.

What must I do to the man, whoever he is, who has failed to give the Queen the stool to which she is entitled? The British Queen is entitled to the stool, and she must receive it. Where is the Golden Stool? I am the Queen’s representative, so why have you made me sit on this ordinary chair? You knew I was coming to Kumasi, so why did you not take the opportunity to bring the Golden Stool for me to sit upon? However, you may rest assured that although you have not delivered the Golden Stool into the hands of the British Government, it will rule over you with the same impartiality and fairness as if you had produced it.“

Hodgson’s speech was the functional equivalent of an alien marching into the Vatican, addressing a throng of cardinals and priests and the other faithful, and requesting that they bring him the Papal throne so he could defecate upon it. Had Hodgson been less ignorant about his audience and of what made them tick, he would have realized that it was inconceivable that the Ashanti would willingly produce the Golden Stool – symbol of the Ashanti state and its peoples, past, present, and future – for a foreigner to sit upon and defile.

Asantewaa shamed the Ashanti for their passivity and perceived cowardice, and fired them up into resistance with a stirring speech, the gist of which went: “I see that some of you are afraid to step forward and fight for our king. If we were still in the brave days, the days of Osei Tutu, Okomfo Anokye, and Opoku Ware, our chiefs would not simply sit down and see their king being taken away without firing a shot. In those days, no white man could have dared to speak to an Ashanti chief the way the Governor spoke to you chiefs this morning.

How can a proud and brave people like the Ashanti sit back and look while white men take away their king and chiefs, and humiliate them with demand for the Golden Stool? The Golden Stool only means money to the white man; they have searched and dug everywhere for it. I shall pay nothing to the Governor. If you, the chiefs of Ashanti, are going to behave like cowards and not fight, you should exchange your loincloths for my undergarments. Is it true that the bravery of the Ashanti is no more? I cannot believe it. It cannot be! If the men of Ashanti will not go forward, then we, the women, will. We will fight the white men until the last one of us falls in the battlefields“.

The War of the Golden Stool and its Aftermath

After delivering her stirring speech, Nana Yaa Asantewaa put an exclamation mark on it by grabbing a gun and shooting into the air. The effect was electric, firing up the audience and whipping the embers of Ashanti resentment into a roaring blaze of resistance. That evening, she and the gathered chiefs “drank the gods” – libations poured out as offerings – and pledged to rid themselves of the British yoke. She was also appointed Ashanti war leader and commander of the forces – a role to which no woman had been appointed before.

Within days, thousands had flocked to join Asantewaa. Many more, who had initially been reluctant to join, were shamed into doing so after Asantewaa enlisted the women, to carry out a highly effective public relations campaign. Women were organized into marching around their villages, and engaging in martial rituals to demonstrate their support and solidarity. The masculinity of laggard men was publicly challenged, and Asantewaa even got Ashanti women to withhold sex from their husbands if they did not join the resistance.

In the meantime, Governor Hodgson had hastily retreated into Kumasi’s fort along with his wife and military escort. There, they soon found themselves surrounded by thousands of warriors, deep inside Ashanti territory and hundreds of miles away from the coast and British military rescue. The fort’s machine guns and modern artillery held the besiegers at bay, so the Ashanti, who lacked artillery to breach its walls, settled down to a prolonged siege, cutting off the defenders from supplies and hoping to starve them into surrender.

Asantewaa directed her men to erect massive barricades along the routes to Kumasi, made of stones and logs and dirt, that proved highly resistant to British artillery. Between the barricades, ambushes, and other delaying tactics employed by the Ashanti, a British relief expedition dispatched to rescue Hodgson found its pace reduced to a crawl. A relief column of about 700 men finally reached the fort, only to end up besieged themselves. With supplies running low, the governor organized the healthiest men into a breakout, which spirited him and his wife to safety, while leaving the sick and wounded behind.

Eventually, a bigger British expedition was organized, which marched into Kumasi, lifted the siege, and broke the Ashanti resistance, bringing to an end the War of the Golden Stool. It had cost the British 1007 lives, while the Ashanti lost an estimated 2000. The Ashanti were annexed and incorporated into the Gold Coast colony as a protectorate, but were left to run their own internal affairs, with considerable autonomy that amounted to de facto independence. The Golden Stool was not surrendered to the British, but hidden deep in the forest. It was accidentally discovered decades later by some laborers, who desecrated it by removing some of its ornaments. As to Asantewaa, she was exiled to the Seychelles, where she died in 1921. Her body was eventually returned to her homeland, where it was buried with honors. Today, she is viewed in Ghana as a great national heroine.

Wikipedia – War of the Golden Stool