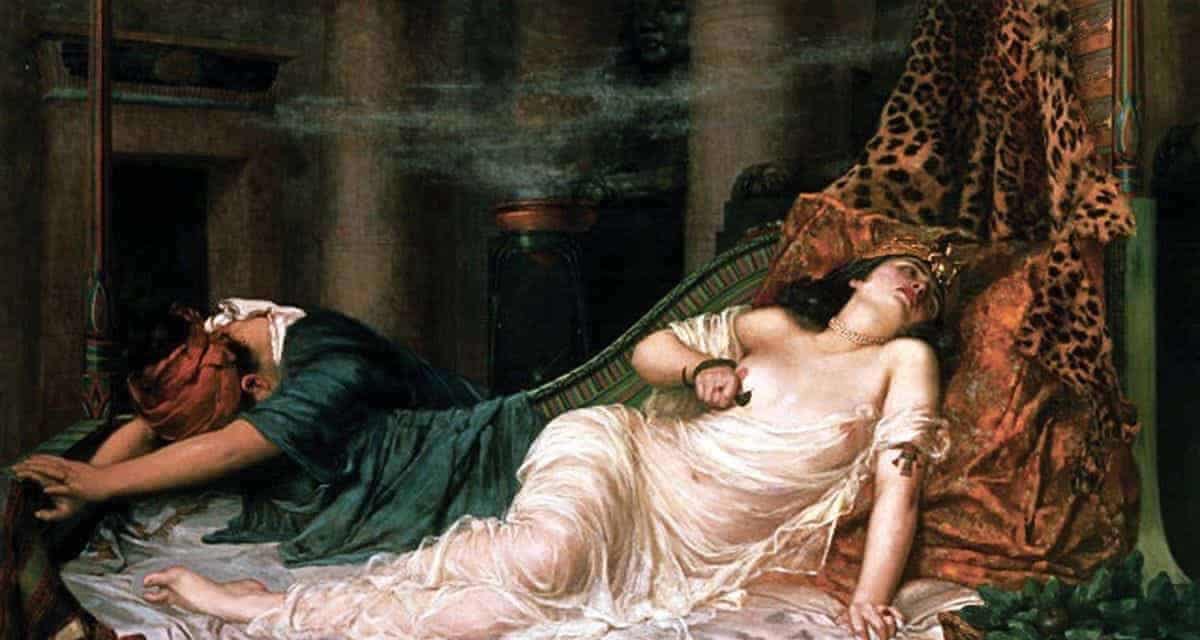 On this day in history, one of the most famous women in history Cleopatra took her own life. She was, born in 69 B.C., and was made Cleopatra VII, queen of Egypt, upon the death of her father, Ptolemy XII, in 51 B.C. Her brother who was also her husband was also crowned Pharaoh the following year. The two siblings soon became rivals and hated each other. Both were members of the Macedonian Dynasty and descended from the Macedonian General Ptolemy. Although Cleopatra had no Egyptian blood, she was popular with them, as she was the first member of her dynasty who learned Egyptian. In order to win popularity, she claimed to be the daughter of the Egyptian God Ra, the sun god. When Cleopatra fell out with her brother, they plunged Egypt into civil war.

Cleopatra had the worst of it and was on the verge of defeat. However, she was saved by Julius Caesar. He was visiting Egypt in pursuit of his arch-enemy Pompey. However, Pompey was assassinated on the order of Cleopatra’s brother. Julius Caeser decided even after the death of Pompey to restore order in Egypt. It was a very strategic country for Rome. During the preceding century, Rome exercised increasing control over the rich Egyptian kingdom. Caesar, with his legions, helped her to win the war with her brother and become the sole ruler. They became lovers and they had a child Caeserion or ‘little Caeser’.

After Caesar’s death, Cleopatra was very vulnerable to her enemies. However, she found a new ally and a new lover in Mark Anthony. This was despite the fact that he was already married. He was vying with Octavian for control of the Roman Empire. Mark Anthony and Cleopatra became joint rulers of the Roman East and Egypt. However, after their defeat at the naval battle of Actium, their power collapsed. Octavian followed up his victory and was on the point of invading Egypt. Mark Anthony and Cleopatra deserted by their allies, had nothing left. Her situation was hopeless.

Cleopatra was not going to let herself be taken, prisoner. She decided to kill herself. Cleopatra knew that Octavian hated as did most of the Roman population. She feared that she would be dragged through Rome in chains to the jeers of the Roman mob. A proud queen she would not demean herself and beg for her life, from her hated enemy. The legend claims that she killed herself by placing her hand in a basket with an asp a poisonous snake. Some have disputed this version of events.

Upon her death, Egypt was to become a province of the Roman Empire and was to remain so for several centuries. Furthermore, she was the last of the Ptolemaic Rulers, who had ruled Egypt for three hundred years.