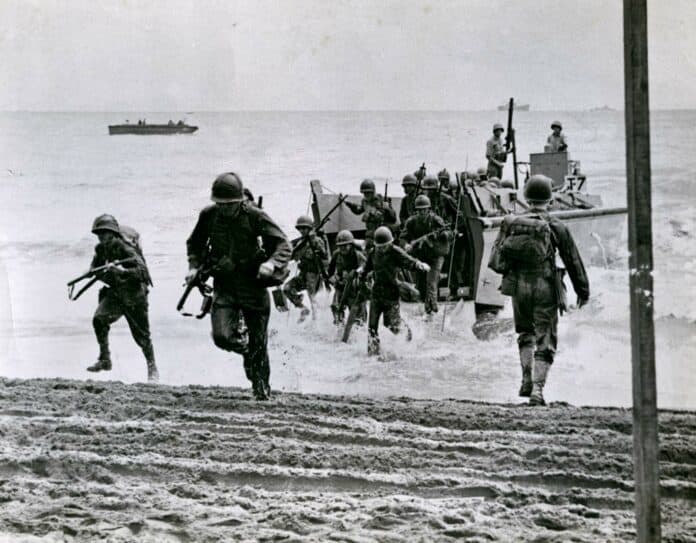 In early 1942, during the opening months of WWII in the Asia-Pacific theater, the Allies were reeling from a series of setbacks when a small Dutch minesweeper found herself cut off in the Java Sea. Alone in hostile waters that were infested with enemy ships and airplanes, the tiny vessel’s crew hit upon the ingenious solution of camouflaging their ship as an island, while wending their way towards safety. The result was one of the more intrepid – and harrowing – WWII survival stories. Following are forty things about that and other fascinating but lesser-known episodes from WWII.

Attempts at camouflaging ships were widespread during World War I and WWII. In the 1914-1918 conflict, painting vessels grey helped reduce visibility, but it did not always work in ever-changing environments and sea conditions. The British ended up pioneering “Dazzle” camouflage paint schemes, using bold stripes and bright colors. The patterns did not hide the ship, but disrupted its outline to make it more difficult to judge its size, speed, and heading. That made it more difficult for the enemy to accurately target it.

Dazzle and other camouflage schemes were also employed in WWII, but their use declined as the war progressed. Steady advances in radar and range finding technology steadily reduced ship camouflage’s effectiveness. However, early in the Pacific War, one Dutch warship, the HNLMS Abraham Crijnssen, pulled off one of history’s most successful ship camouflages: it disguised itself as a tropical island. That allowed the Crijnssen to sail undetected for hundreds of miles through Japanese-controlled waters, until it reached safety in Australia.