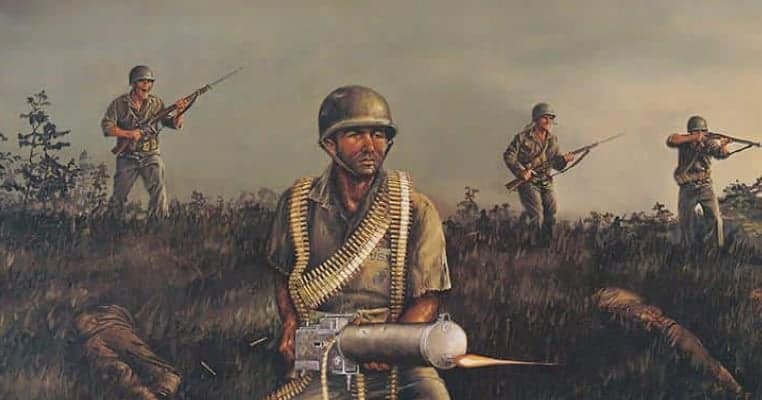 It takes serious guts to stand up to thousands of fanatical enemy soldiers charging one’s position at night in a hot and fetid tropical jungle. It takes even more guts to stand up to said horde alone, after all your comrades have been killed, overrun, or retreated. That, however, is what United States Marine Corps sergeant Mitchell Paige (1918 – 2003) did in Guadalcanal in the early AM hours of October 26th, 1942, when his position was attacked by roughly 2500 Japanese. His solo heroics over the next few hours would earn him a Medal of Honor, national renown, and a place in the history books.

The Making of a Marine

Mihajlo Pejic, who would later anglicize his name to Mitchell Paige, was born in Pennsylvania in 1918, to Serb immigrant parents who hailed from what had been the Austro-Hungarian Empire. As Paige would later recount, his mother had managed to raise him and his brother as proud Americans, while keeping them aware of and in touch with their Serb ethnic roots. From early childhood, as he recalled, he grew up with stories of Serbian feats of heroism and resistance, dating from as far back as the 1389 Battle of Kosovo.

Consuming such martial lore as steady fare at home, it was no surprise that Paige grew up with a desire to join the military. As a young boy, he watched a parade that featured proudly marching US Marines, and then and there, he made up his mind that he would join the Corps as soon as he was old enough. Paige graduated high school in 1936, and later that summer, he walked about 200 miles from his Pennsylvania hometown to the Marine recruiting center in Baltimore, Maryland. There, on September 1st, 1939, he enlisted. After boot camp in Parris Island, SC, and further training, he ended up as a gunner aboard the battleship USS Wyoming, that eventually took him to the West Coast and the Pacific.

Paige’s stint aboard the Wyoming was followed by a series of onshore duty assignments, that took him from San Francisco to the Philippines and eventually to China. During that period, he played for the Navy-Marine baseball team, which gained some renown in the second half of the 1930s, and also tried his hand at boxing. In 1939, he took part in American disaster relief efforts in China, following catastrophic flooding that devastated the Tianjin region.

1940 saw Paige back in the US, where he served in the Navy Yards at Brooklyn and Philadelphia. He then joined the 5th Marine Regiment, and took part in training exercises and maneuvers in Cuba and Puerto Rico. After that stint in the Caribbean, Paige was transferred back to the US in 1941, as part of the initial cadre that set up a new training base for the Marines at Camp Lejune, North Carolina.

After the Japanese attack on Pearl Harbor later that December thrust America into WWII, Paige was returned to overseas duty, this time with the 7th Marine Regiment. By 1942, Paige had risen to the rank of sergeant, in charge of his own platoon, and in September of that year, he and his unit headed for Guadalcanal in the Solomons Islands. There, within a few weeks of arrival, USMC Sergeant Mitchell Paige would earn his place in history.

1942 had been a generally grim year for the US and the Allies in the Asia-Pacific Theater, relieved only by the American naval victory at the Battle of Midway that June. The rampaging Japanese had run riot, capturing the Philippines, the Malay Peninsula, Singapore, Hong Kong, Burma, Wake plus sundry other Pacific islands, much of New Guniea, and were threatening India and Australia. Things began looking even grimmer when news arrived that the Japanese were busy building an air base in Guadalcanal, one of the Solomon Islands in the South Pacific.

In peacetime, there was nothing significant about the Solomons, but in wartime, they became vitally important. Japanese long range aircraft operating out of Guadalcanal could disrupt communications and supply lines between America and Australia, and that was unacceptable. So a decision was made to seize the island before the Japanese airfield there became operational. Rushed planning was followed by a rushed Marine invasion in August of 1942, that caught the enemy off guard and seized the nearly completed airfield. It was hurriedly completed by its new owners, and opened up for business as Henderson Field, named in honor of a Marine aviator.

The invasion of Guadalcanal started off well, but things soon took turn for the worse. Setbacks at sea made the waters around the island too dangerous for the US Navy, which hurriedly decamped. That left the Marines – who not yet landed all their munitions and supplies from transport ships – stranded, just as the Japanese were rushing in reinforcements for a counterattack to regain control of the island. What followed next were weeks of sheer hell on earth. Desperate Marines, supported by a collection of plucky airmen flying off of Henderson Field, short of just about everything, fought off attacks by an enemy equally desperate to kick them off the island.

In September of 1942, Mitchell Paige arrived with the 7th Marine Regiment, under the command of legendary leatherneck Chesty Puller, to reinforce their hard pressed brethren in Guadalcanal. During the night of October 25-26, Paige and his platoon were dug into their foxholes, when he heard and noticed signs of a heavy enemy activity and preparations somewhere out in the pitch dark of the jungle.

Correctly judging that a Japanese night attack was in the works, Paige did what he could to ready his men for the coming storm. It broke in the early morning hours. At 2AM, October 26th, 1942, the relative quiet of the jungle night was was shattered by the din of battle. Thousands of Japanese from the 16th and 29th Infantry Divisions made a desperate bid to overrun the 7th Marines, in order to capture Henderson Field. Their main route went straight through the position occupied by a platoon led by one USMC sergeant Mitchell Paige.

The desperate fighting that saw Mitchell Paige’s exploits was the culmination of the Battle For Henderson Field, October 23rd to 26th, 1942. It was the third major offensive that sought to recapture Guadalcanal, as the Japanese 17th Army made a desperate bid to burst through US Marine and Army forces guarding the Lunga Perimeter, which protected Henderson Field. Over three days and nights, the Japanese launched a series of assaults around the American perimeter, all of them beaten back with heavy losses.

The most dramatic of those assaults was probably the one that took place on the final night of the battle, directly through Mitchell Paige’s platoon. When the charging Japanese drew within a few hundred yards of his position, Paige ordered his men to open fire. Machine gun and rifle bullets mowed down rows upon rows of the enemy, but they ignored their losses, and pressed their attack to Paige’s position. The fighting soon descended into hand to hand combat, as Marines and Japanese infantrymen grappled with each other in the dark, stabbing, clubbing, bayoneting, and sometimes literally fighting tooth and nail by biting and clawing one another.

The first Japanese charge was repulsed, but the respite was only temporary, as the first attack was followed by additional waves of fanatical attackers. As the desperate night dragged on, the unit to Paige’s left was overrun and his men ended up isolated, and fell one after the other, killed or wounded. Eventually, Paige ended up as the sole survivor in his company still on the battle line and capable of fighting. So he fought on, alone.

Paige found himself manning a machine gun position by himself, that was surrounded by an entire Japanese regiment. He kept pouring fire into the enemy, until his machine gun was shot up and put out of action. So he braved heavy fire and broke through enemy lines to a neighboring company, commandeered one of their machine guns, and ordered some riflemen to fix bayonets and follow him. Over the next few hours, Paige made a desperate last stand that saw him alternating between four machine guns, as each overheated or was otherwise put out of action. During that stretch, he singlehandedly broke a Japanese attack that threatened his battalion’s command post.

After beating off one wave of attackers, Paige grabbed a machine gun, and firing it from the waist like a Greatest Generation Arnold Schwarzenegger, charged down a hill to disrupt a Japanese attempt at regrouping. During that charge, a Japanese officer emptied a pistol trying to shoot Paige, but missed. He then drew his samurai sword, but Paige mowed him down before he got close enough to take a swing. All in all, through a series of personal heroics, Paige held his position for ten hours, before reinforcements finally arrived to stabilize the line. Mitchell Paige’s exploits earned him the highest award for valor, and his Medal of Honor citation read:

“For extraordinary heroism and conspicuous gallantry in action above and beyond the call of duty while serving with the Second Battalion, Seventh Marines, First Marine Division, in combat against enemy Japanese forces in the Solomon Islands Area on October 26, 1942. When the enemy broke through the line directly in front of his position, Platoon Sergeant Paige, commanding a machine-gun section with fearless determination, continued to direct the fire of his gunners until all his men were either killed or wounded. Alone, against the deadly hail of Japanese shells, he manned his gun, and when it was destroyed, took over another, moving from gun to gun, never ceasing his withering fire against the advancing hordes until reinforcements finally arrived. Then, forming a new line, he dauntlessly and aggressively led a bayonet charge, driving the enemy back and preventing a break through in our lines. His great personal valor and unyielding devotion to duty were in keeping with the highest traditions of the United States Naval Service“.

Tara Ross – This Day in History: Mitchell Paige & the Battle of Guadalcanal

War History Online – Mitchell Paige: The Man Who Took On 2500 Japanese, and Won