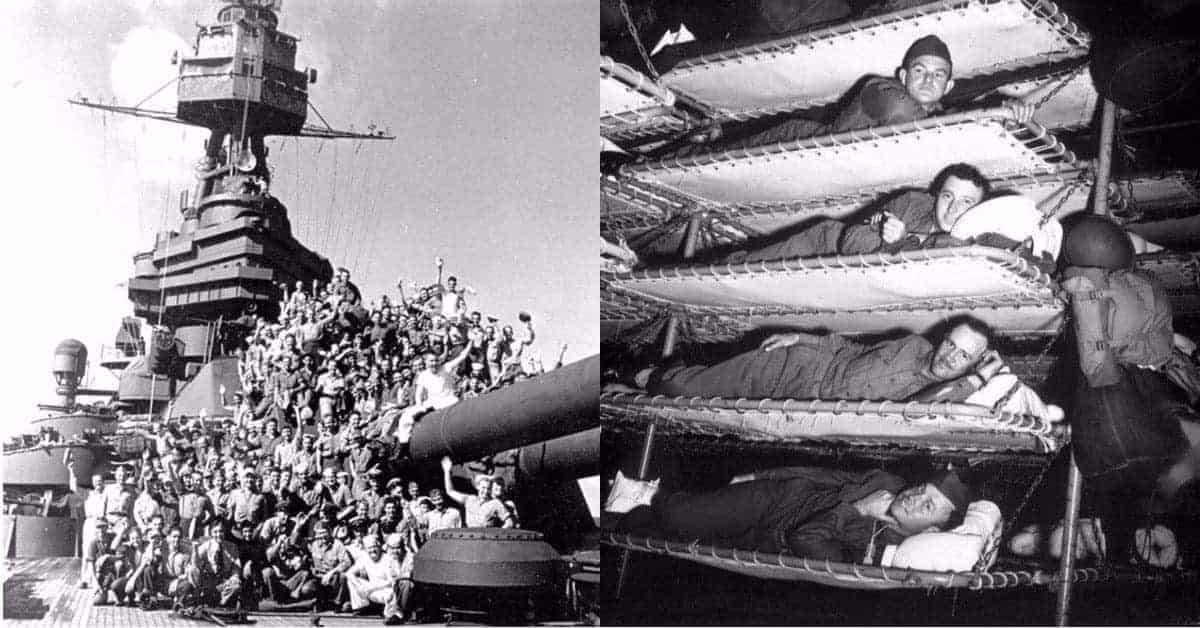 After the Japanese attack on Pearl Harbor, the United States mobilized as it never had before or since. Beating plowshares into swords, America began the Herculean process of shifting from a peacetime footing to one of total war. Industry was retooled from civilian pursuits such as manufacturing lipstick casings and converted to pumping out bullet cartridges; from producing typewriters to turning out tanks; and from assembly lines rolling out family sedans to rolling out heavy bombers by the thousand. More importantly, America mobilized her most precious asset: her manpower.

As late as 1939, the US had an Army of only 170,000 men, even as war raged in Asia and clouds of conflict gathered over Europe. By 1945, America had put 16 million men in uniform – a figure that, if prorated to current population, would be the equivalent of an American military numbering nearly 40 million.

At war’s end, more than 8 million US servicemen, were stationed overseas, scattered all over the globe. The fighting was over, and it was time to bring our heroes home – heroes whose eagerness to return to civilian life was matched by the eagerness of their loved ones to see, touch, and embrace them once again. To that end, Operation Magic Carpet was conducted to repatriate America’s troops to US soil. The massive logistical effort was entrusted to the War Shipping Administration (WSA), an agency created during the emergency of WWII to coordinate, oversee, and operate America’s civilian shipping in support of the war effort.

Planning for Magic Carpet began in 1943. Even as transports crossed the Atlantic, laden with the troops who would help free a continent from the Nazi yoke, the WSA and the War Department drew plans for their eventual return. Priority was determined by the Advanced Service Rating Score – a pecking order based upon the principle that: “those who had fought longest and hardest should be returned home for discharge first”. Points were awarded for months of service, months of service overseas, combat awards, and for dependent children. The more points scored, the greater the priority for shipping home and discharge.

Implementation of Magic Carpet began in earnest when the first ships set sail in June, 1945, from the European Theater and crossed the Atlantic, laden with returning servicemen. The American buildup in Europe had averaged about 150,000 troops shipped across the Atlantic per month. After the war ended, Magic Carpet reversed the tide, returning US servicemen at an astonishing rate that averaged 435,000 men per month during a 14 month stretch, with a peak reached in December of 1945, when over 700,000 personnel were repatriated from the Pacific Theater alone.

To maintain the pace, the number of ships employed steadily grew from the initial 300 requisitioned by the WSA at the start of the operation. The motley fleet ranged in size from small vessels with a carrying capacity of only 300 troops, to behemoths such as the luxury liners Queen Elizabeth and Queen Mary, converted during the war into troop transports capable of carrying up to 15,000 servicemen.

Passage times varied, depending on the servicemen’s location, as well as the luck of the draw in the ships to which they were assigned. For example, the USS Lake Champlain set an Atlantic crossing record in a mere 4 days and 8 hours. By contrast, others returning from posts farther away, such as India or Australia, could spend weeks or months at sea aboard slower vessels.

Daunting and complex as it was, Magic Carpet was completed relatively quickly. By September, 1945, 1.4 million servicemen, nearly all of them from the European Theater, had been repatriated. By December 1st, 1945, the WSA had successfully repatriated over 3.5 million personnel. By February of 1946, repatriation from the ETO had, by and large, been completed.

Repatriation from the European theater began relatively smoothly: by 1945, both the US Army and the WSA were experienced in the rapid transporting of massive numbers of troops from bases on America’s East Coast to Europe. Reversing the process was relatively simple. Until the sudden capitulation of Japan in August of 1945 threw a monkey’s wrench into the works.

The war in the Pacific had been expected to last well into 1946. As such, repatriation of American forces from the Pacific had been unanticipated in 1945. Thus, when that war ended only three months after hostilities had concluded in Europe, just as the WSA was in the midst of what by then was an already massive repatriation effort from the ETO back to America, the authorities were caught flat footed: there was not enough readily available sealift capacity to simultaneously repatriate millions of servicemen from both the European and Pacific theaters.

Not nearly as quickly as the servicemen wanted to return home, nor as quickly as their loved ones and the American public demanded that they be returned. When the WSA’s supply of readily convertible cargo ships could not keep up with the demand, the US Navy chipped in. Improvising, naval combat ships were designated as troop transports.

Thus, by administrative fiat, the Navy diverted for use in Magic Carpet battleships such as the Washington, West Virginia, and Maryland, and aircraft carriers such as the Enterprise, Saratoga, and the newly commissioned Lake Champlain. Aircraft carriers, with their massive and open hangar decks, proved well suited for the task. Such naval giants were joined by sundry smaller vessels, ranging from cruisers to Landing Ship Tanks (LSTs) to destroyers.

Some combat ships were hurriedly retrofitted to serve as transports, as was the case with aircraft carriers, in whose hangars were bolted or welded massive bunk beds. Other Navy vessels, particularly smaller ones such as destroyers, were frequently impressed to serve as transports as they were, with returning servicemen invited to shift for themselves, deploying hammocks wherever possible, and making do by squeezing into whatever nooks and crannies and free space were available aboard ship.

The Pacific portion of Magic Carpet entailed extra layers of complexity, and, especially at the beginning, required greater dispatch than had been necessary in Europe. Aside from the Pacific’s vast distances compared to the European theater, there was the urgent need to rescue American POWs from the scattered Japanese camps in which they had languished for years, often starved, brutalized, and otherwise barbarically mistreated by their captors.

To that end, once the ceasefire was declared in the Pacific on August 15, 1945, aerial reconnaissance missions were flown from US aircraft carriers to try and pinpoint POW camps in Japanese territory. Once located, airdrops of supplies, especially food and medicine, sometimes accompanied by courageous medics and doctors who volunteered to parachute in, were conducted to succor the malnourished and ill captives. As soon as the Japanese surrender was officially signed, and sometimes even before, American POWs were retrieved from Japanese captivity and, given a high priority, started off on their long journey home.

Magic Carpet in the Pacific Theater of Operation was concluded by September of 1946, when the War Shipping Administration, created as an emergency measure during the crucible of war, was finally stood down, and its functions were returned to the civilian Maritime Commission. A subset of Magic Carpet, termed Operation Santa Claus, aimed to bring home as many eligible troops as possible in time for Christmas of 1945. December, 1945, was the peak month of the entire sealift, with the number of returning personnel spiking from the monthly average of 435,000, to 700,000 from just the Pacific alone.

Unfortunately, as many as 250,000 returning servicemen found themselves stranded on the East and West Coast, unable to reach their homes home due to the mother of all rail jams – and railways were the primary mode of long distance travel then. Fortunately, thousands of civilians opened their hearts and homes, welcoming servicemen to join them for Christmas. They might not have enjoyed the warmth of their own families, but they enjoyed the warmth of strangers who made them a part of their family that day.

Other examples of generosity abounded, including a trucker to who took 35 troops from Denver to Dallas and points between, or a Los Angeles cabbie who drove 6 servicemen veterans all the way to Chicago, and another LA cabbie who did him one better, and transported 6 returning heroes to New York City. Even for those who spent Christmas stranded in barracks, the reaction of one returning private best captured the mood, noting that simply touching US soil once again was: “the best Christmas present a man could have”.

The movement of personnel during Magic Carpet was bi-directional. Not only were Americans being shipped from around the world back to the US, but German, Italian, and Japanese POWs were also being shipped back to their homes from captivity in the US. In one round trip, the USS Wasp transported 1200 Italian POWs from the US to Naples, and the following day sailed back to the US, carrying 4000 American servicemen.

US occupation forces were also ferried to Germany, Japan, Korea, and China. Simultaneously, Chinese troops were sealifted from southern to northern China to disarm the Japanese, as well as oppose Chinese communists in the region. And hundreds of thousands of disarmed Japanese were shipped from all over eastern and southern Asia, as well as numerous Pacific islands, back to the Japanese home islands.

It had taken nearly four years for America to deploy 8 million servicemen overseas. It took only 14 months to reverse the torrent and return most of them home. In short, Operation Magic Carpet was an enormous, and enormously successful, feat of logistics, planning, and execution.