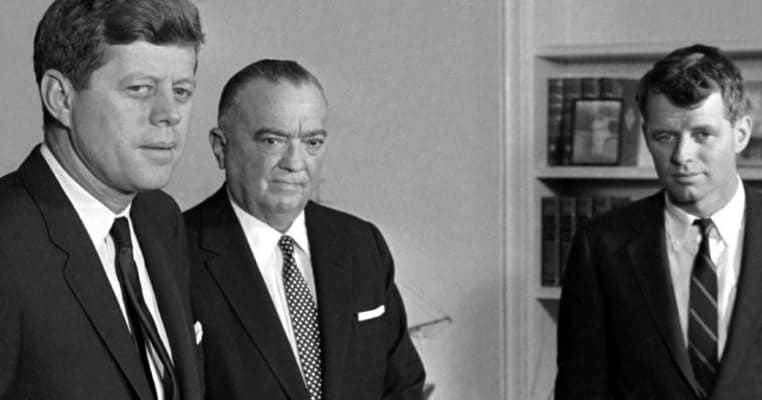 18. J. Edgar Hoover wanted Richard Nixon as President and worked to elect him to the office

When Richard Nixon, then Vice President of the United States, ran for the Presidency in 1960 his boss, incumbent President Dwight David Eisenhower, was tepid in his endorsement. J. Edgar Hoover wanted Nixon to be elected, and after the disappointment in 1960 he worked to ensure Nixon prevailed when he ran again in 1968, and for re-election in 1972. In 1971 the former Attorney General for the United States and erstwhile Nixon law partner John M. Mitchell served as the head of Nixon’s Committee to Re-elect the President (with the acronym CREEP, surely the most apropos such designation in the history of American politics). Hoover used FBI sources to funnel politically volatile information to Mitchell for use by the Nixon campaign. It was information provided by Hoover which led the Nixon White House to create the White House Investigations Unit, the official name for what became famous as the White House Plumbers.

According to a Hoover memo which eventually found residence in his Confidential files, and which was shared with John Mitchell, information critical of the FBI was being fed to the McGovern campaign by disenchanted agents. McGovern used the information, which included revelations of illegal surveillance on American citizens, to attack Hoover and by extension the Nixon Administration. The names of individuals to which information was linked included journalists and columnists, and Hoover provided their names, as well as the names of their sources. They became the basis of what later was known as the White House Enemies List. Thus Hoover and Nixon, with Mitchell as an intermediary, using illegally obtained information to discredit the Democratic candidate for President, while Nixon ran on a platform which described him as the Law and Order candidate, enjoying a ringing endorsement from the long-term director of the FBI, America’s greatest lawman, J. Edgar Hoover.

19. The FBI files on Ernest Hemingway contributed to the writer’s suicide, according to close friends

Ernest Hemingway was a living legend as a writer, and as what was in his day considered to be a man’s man. Besides his career as a writer of fiction, he was over the course of his life a war correspondent, big game hunter and fisherman, a noted outdoorsman and adventurer. He was at home with bullfighters and prizefighters as he was with literary critics and agents. By 1959 Hemingway was convinced that he was a constant target of FBI surveillance, and later examination of FBI files indicated that he had been correct. Hemingway, while living in Cuba in 1959, told friends that, “They’ve bugged everything…Can’t use the phone. Mail’s intercepted”. Hemingway insisted on using a friend’s car rather than his own during a pheasant hunting trip, certain that his own vehicle was bugged by the FBI. He often left dinners at public restaurants due to his belief that nearby “diners” were in fact FBI agents.

It was Hoover who directed the surveillance of Hemingway, suspicious that the writer held pro-Castro and communism beliefs. As with other of his surveillance targets, Hoover directed his agents to obtain potentially damaging information on the writer’s friends and sexual liaisons, rather than direct evidence of pro-communist leanings. Hemingway’s friends and family, convinced that the writer’s complaints (coupled with other actions on his part) were part of his increasingly evident mental illness had Hemingway subjected to electro-shock therapy in Minnesota. Just less than two years later he committed suicide with a shotgun. Just over a decade following his death, the revelation of the FBI’s files included a 124-page file on Ernest Hemingway. According to the evidence contained in the file, there was a strong indication that his medical records during his shock treatments – at St. Mary’s in Rochester, Minnesota – were monitored and the writer’s statements recorded by the FBI.

“Bobby and J. Edgar: The Historic Face-off between the Kennedys and J. Edgar Hoover That Transformed America”. Burton Hersh. 2007

“The Bureau: The Secret History of the FBI”. Ronald Kessler. 2002