The Dark Side of Richard Nixon 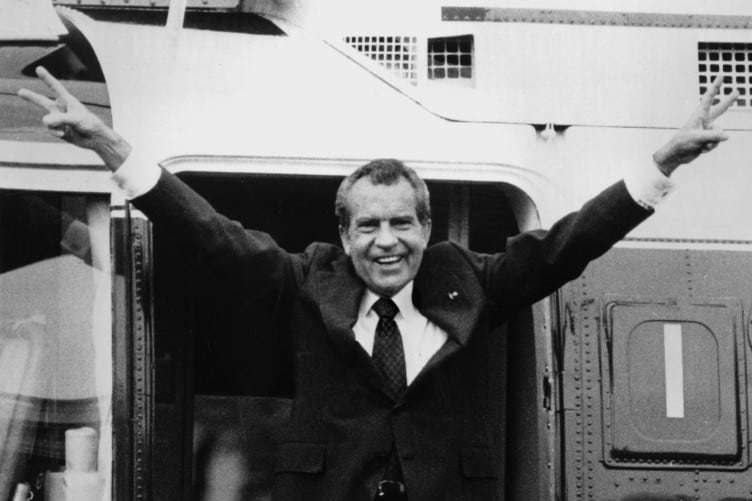 The Dark Side of Richard Nixon

Richard Nixon, the 37th President of the United States, was one of the most controversial politicians of the 20th century. For all of his admirable qualities, he was also a man with deep character flaws. His obsession with attaining power and holding onto it at all costs led to his spectacular fall from grace in the form of the Watergate scandal. This article will look a little more deeply at Nixon the man and how he contributed to his own downfall.

Richard Nixon, once said, “I have a quality that I must have inherited from my Mid-Western mother and father, which is, the tougher it gets, the cooler I get.” In fact, the exact opposite was true. According to Richard Nixon’s younger brother, Edward, Richard’s temperament more closely resembled their fathers, who would often “fly off the handle” and would have to be calmed down by their mother. This type of reaction would occur on numerous occasions throughout Richard Nixon’s political life.

Upon hearing in 1954 that the Vietnamese were rebelling against their French colonial occupiers, Nixon, who was Vice President of the United States at the time, suggested to President Eisenhower that the U.S. should send in ground troops to quell the uprising. He even went as far as suggesting the use of nuclear weaponry against the Vietnamese. Nixon feared a domino effect that other countries in the region might follow Vietnam is becoming communist states. On another occasion, when Palestinian terrorists hijacked several airplanes and landed them in Jordan, Nixon ordered the bombing of a Jordanian airfield to the shock of military advisers. Luckily, bad weather put an end to the plan.

Those closest to Nixon felt that he lacked the personality traits of a natural politician. Deep down Nixon was a shy and sensitive person. Nixon’s Secretary of State, Henry Kissinger, said that Nixon was “not gregarious and that he didn’t like to meet people, which was an unusual trait for a politician.” Kissinger says that in order for Nixon to become a politician “he had to in some respects, act against his nature, which was reclusive.”

What Nixon did have was an insatiable desire for power and becoming a politician was his means of attaining that power. Nixon was a workaholic and by the early 1950s, it was beginning to have a detrimental effect on his health. A friend lent Nixon a book called “The will to live” by Dr. Arnold Hutschnecker, a psychotherapist with a specific interest in how emotional disturbances impact health. Nixon was so impressed with the book that he made an appointment with the doctor at his practice in New York.

Nixon told Dr. Hutschnecker that lately, he had been nervous and that he was having difficulty sleeping so Dr. Hutschnecker gave Nixon a prescription and told him to come back in two weeks. Nixon visited Dr. Hutschnecker around five times in 1952 and repeatedly turned to him in times of crisis. Dr. Hutschnecker felt that Nixon was suffering from depression and insomnia and while Nixon was not psychotic in any way, he felt that “he had a good deal of neurotic symptoms.” Nixon ultimately stopped meeting with Dr. Hutschnecker, because as Dr. Hutschnecker put it, it was less damaging for a politician to be seen with a prostitute than a psychotherapist.

Nixon Runs for President of the United States

Nixon won the Republican nomination for the 1960 presidential election. He faced the Democratic nominee, John F. Kennedy. Nixon pushed himself to the limit in the race for the White House, campaigning in every state in the Union. Nixon’s political philosophy, and maybe justifiably, was that politics was a dog-eat-dog business – that you get the other man before he gets you. His reputation for underhanded politics had earned him the nickname “Tricky Dicky.” On this occasion, however, it appears that Nixon was on the receiving end of some political foul play. He lost out by the narrowest of margins and it is believed that significant electoral fraud occurred which swung the election in JFK’s favor.

The manner of his defeat in the presidential election is said to have hardened his attitude toward the Kennedys and over the following years, his hatred towards them verged on the obsessive. Nixon was notorious for holding a grudge. It was later discovered that Nixon had compiled a list of over two hundred people who he considered enemies. The list contained a number of political foes and representatives of the media amongst others. It is also alleged that Nixon was not above using the Secret Service and the IRS to target his perceived enemies.

In 1962 Nixon ran for Governor of California. When he failed in his attempt, an intoxicated Nixon gave a press conference where he said to the press, “you won’t have Nixon to kick around anymore.” According to his brother Edward, this was “the kind of thing (their) father would say.” The dark side of Nixon’s personality manifested itself further when he beat his wife Pat so badly that she went into seclusion. She even considered divorce but in the end, stuck by her husband. However, it is claimed this was not the last time he was physical with her.

Around this time former Wall Street tycoon Jack Dreyfus was using his considerable wealth to lobby for wider use of Dilantin, an anticonvulsant drug used to treat epilepsy. Dreyfus believed that Dilantin could be used for a variety of disorders and conditions, including stress and depression. Nixon asked Dreyfus for a bottle of Dilantin, and when Dreyfus said to him that he would need to have it prescribed by a doctor, Nixon basically said to heck with doctors. Dreyfus took a bottle from the boot of his car containing 1000 pills and gave it to Nixon.

Dilantin was known to have serious side effects if taken in the wrong dose or if it was taken along with alcohol and/or sleeping pills, both of which Nixon was regularly using. The side effects included severe mental confusion, psychosis, delirium and slurred speech. Author Anthony Summers, who along with his wife Robbyn Swan, co-authored the Nixon biography, The Arrogance of Power: The Secret World of Richard Nixon, speculates that Nixon’s erratic behavior may not have been down to alcohol but the incorrect use of Dilantin.

According to Dr. Hutschnecker, Nixon sought out positions of power but lacked the resilience to cope with the pressure which came along with that power and responsibility. On one occasion, when war broke out in the Middle East, there were genuine concerns that Russia would get involved. At the height of the crisis, when top-ranking officials were meeting to discuss the matter, Nixon was unreachable, apparently having retired to bed at 9 p.m., and believed to be highly intoxicated. On another occasion, following the killing of four anti-war demonstrators at Kent State University, a worse for wear Nixon met with a group of protestors outside the White House. The protestors who were interviewed afterward said that Nixon had been rambling on incoherently, going from topic to topic without ever finishing a thought.

Stains on his record

Nixon came back to national prominence once more when he again won the Republican nomination for president in 1968. Nixon ran on the promise that he would bring an end to the hugely unpopular and nationally divisive Vietnam War. After President Lyndon B. Johnson (LBJ) announced that he would not be running for president in the 1968 election, Hubert Humphrey became the Democratic opponent Nixon would face for the presidency. Nixon was comfortably ahead in the polls when LBJ announced that the North Vietnamese had offered to attend peace talks if the U.S. agreed to a bombing halt. LBJ was keen to bring about an end to the hugely unpopular war and agreed to the demand.

Nixon saw this as a potential threat to his victory in the race for the White House as he was campaigning on a platform of bringing an end to the Vietnam War. Nixon’s fears were being borne out in the polls and his rival Humphrey was cutting into his lead. While publicly Nixon was saying that he would not do or say anything that might interfere with the peace negotiations, privately Nixon began attempts to scupper the Paris peace talks by using an intermediary, Anna Chennault as a go-between him and the South Vietnamese leader, President Thiệu.

FBI surveillance successfully intercepted a message communicated to Anna Chennault from Nixon, which said, “Hold on, we’re going to win,” which meant: tell President Thiệu not to go to the Paris peace talks, that he was going to win the presidency and that South Vietnam would get a better deal from a Nixon administration. Nixon’s plan worked. Three days before the presidential election, the South Vietnamese sent a message to LBJ stating that they would not be attending the Paris peace talks. Any hope of peace evaporated. Nixon went on to narrowly win the election. The Vietnam War raged on for another seven years. During that time thousands of American soldiers and hundreds of thousands of Vietnamese on both sides were killed.

Nixon’s desire to hold onto power most notoriously was demonstrated by his repeated denials of involvement in the Watergate Scandal. As more and more evidence linking him and his administration with the break-in and subsequent cover-up came to light, Nixon let others take the fall in the hope that he himself might survive the controversy. The protracted issue of the release of the White House tapes revealed a man desperately trying to cling to power.

Despite his many flaws, Nixon did achieve some good in his time in power. Arguably Nixon’s greatest achievements came in mending foreign relations. His historic visit to Beijing in 1972 marked the beginning of a new relationship between the United States and China. In May 1972 Nixon and the Soviet Union’s General Secretary, Leonid Brezhnev signed the Anti-Ballistic Missile Treaty and an interim agreement on Strategic Arms Limitation Talks (SALT I).

However, 1972 was also the year of the Watergate Scandal and as the pressure mounted on Nixon over the next two years, and as impeachment loomed, Nixon resigned in August 1974. As Henry Kissinger put it, “Everything that he had worked for all his life was collapsing, and deep down he knew, that he had made a big contribution to its collapse.” In Nixon’s emotional farewell speech, he alluded to his own culpability in his political demise, in it he said, “others may hate you, but those who hate you don’t win unless you hate them and then you destroy yourself.”

CSPAN interview with Anthony Summers and Robbyn Swan discussing their book, The Arrogance of Power.