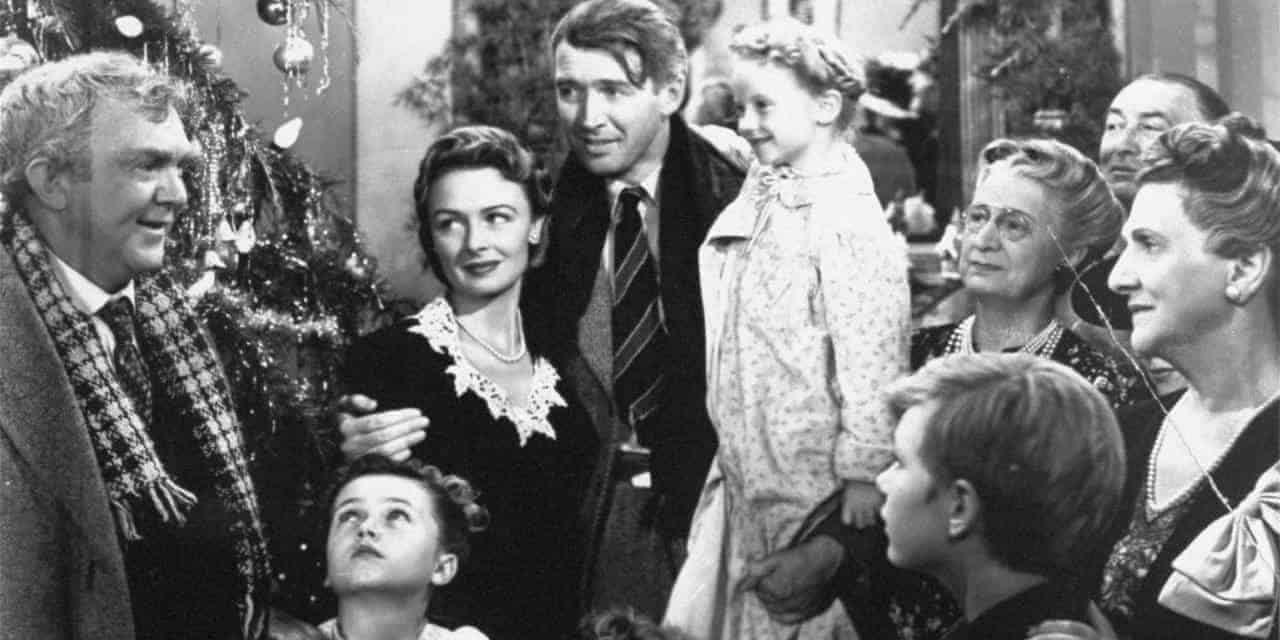 Although it has been over 70 years since its release, It’s a Wonderful Life is still a Christmas classic and a staple of holiday programming. It is also one of the most critically acclaimed movies in history and was nominated for five Academy Awards, including Best Picture. Even so, the 1946 film was not a commercial success and actually lost over $500,000 at the box office. Reviews at the time were mixed with Bosley Crowther of The New York Times railing against the movie’s sentimentality.

In It’s a Wonderful Life, James Stewart stars as George Bailey, a banker who is on the verge of suicide on Christmas Eve, 1945. However, his guardian angel shows George that he has lived a worthy life and illustrates how different his community, Bedford Falls, would have been had George never been born. He eventually concludes that life is worth living and at the end, the guardian angel gets his wings while George is helped by the townsfolk. It is the classic ‘feel good’ movie but according to certain members of the FBI, It’s a Wonderful Life was nothing more than communist propaganda.

It’s a Wonderful Life appeared on a secret list of movies maintained by the FBI for up to a decade after its release. The purpose of the list was to weed out Communist propaganda and for FBI informants, this Christmas classic was guilty of discrediting bankers, a common Communist tactic. In 1947, an FBI memo said that the poor depiction of banker Henry F. Potter was an attempt to discredit the profession. It continued by saying that the depiction was a deliberate ploy to ensure that Potter was the most hated character in the movie.

In It’s a Wonderful Life, Potter (played by Lionel Barrymore) is Bedford Falls’ richest man and also the meanest. He is a powerful shareholder in the business, Bailey Brothers’ Building and Loan, but to his chagrin, he doesn’t own the bank as he does with most of the town’s businesses. Potter is also a greedy slumlord but becomes irritated when Bailey, who takes over Bailey Brothers, launches Bailey Park, an alternative to the overpriced slums offered by Potter. The miser is amazed at Bailey’s actions which he dismisses as ‘sentimental hogwash’. He also asks Bailey: “Are you afraid of success?”

Potter tries, and fails, to buy Bailey off with the offer of becoming his assistant along with an enormous annual salary of $20,000. However, Potter gains the upper hand because Bailey’s daft Uncle Billy misplaces $8,000 of the bank’s cash and it becomes clear that the bank could be subject to criminal charges. Bailey asks Potter for a loan but the miser phones the police instead to have his nemesis arrested. After contemplating suicide, Bailey returns to the town and finds that the people of Bedford Falls have raised the $8,000. As a result, Potter’s warrant is torn up and Bailey Brothers is saved. To the untrained eye, the plot is nothing more than a movie that illustrates the benefits of being kind but to the FBI, it was something far more sinister.

The FBI believed the movie “deliberately maligned the upper class attempting to show that people who had money were mean and despicable characters.” The Bureau said that instead of demonizing Potter, the film should have shown that he was only following the rules issued by State Bank Examiners about making loans. Furthermore, the sympathetic portrayal of George Bailey was nothing more than a subtle attempt to exacerbate the problems experienced by ‘common’ people in society. It was an odd conclusion to make, especially since George and Harry Bailey are also bankers and both men are loved and respected in Bedford Falls.

One of the reasons the FBI focused on It’s a Wonderful Life was because it suspected the creator, Frank Capra, of left-wing sympathies. The Bureau believed that the 1939 Capra movie, Mr. Smith Goes to Washington, was a socialist film. Incidentally, that movie also starred James Stewart. Although the screenwriters of It’s a Wonderful Life, Albert Hackett and Frances Goodrich, were not suspected, they were found guilty by association because they were seen eating lunch with known Communists such as Lester Cole. Oddly enough, the FBI did not discover that at least three actual Communist Party members had uncredited work on the movie’s script.

The Investigation Was a Product of its Time

The FBI was in the midst of a detailed investigation into Hollywood which officially lasted from 1942 to 1958. Although the Bureau didn’t find out that Albert Maltz, Michael Wilson, and Dalton Trumbo had worked on It’s a Wonderful Life, Maltz and Trumbo, along with Cole, were placed in the Hollywood Ten, a blacklist that denied employment to people suspected to have Communist leanings. Wilson ended up on the list in the 1950s. The first Hollywood blacklist was created on November 25, 1947, a day after ten directors and writers refused to testify before the House un-American Activities Committee (HUAC).

The Hollywood Ten, as they became known, were cited for Contempt of Congress and the ten were fired. In 1950, Red Channels was published. It was a pamphlet that named 151 people in the entertainment industry who were either ‘Reds’ or at least sympathizers. The majority of those named, along with hundreds of others, was barred from working in America’s entertainment industry. The ban lasted until 1960 when Trumbo worked as a screenwriter in the successful movie Exodus and also had a major role in writing Spartacus.

It was the era of the Second Red Scare (1947 – 57) which became known as McCarthyism after the staunchest advocate of anti-Communism, Senator Joseph McCarthy. During this era, hundreds of Americans were accused of Communist ties and were often hauled before the HUAC to answer for their ‘crimes’. While government employees were often questioned in this manner, members of the entertainment industry were arguably the prime targets. While Trumbo managed to find work after a ban of over a decade, others were not so lucky and continued to be banned well into the 1960s. Why did the FBI focus so heavily on Hollywood?