Many Don't Know Mel Brooks was a WWII Warrior 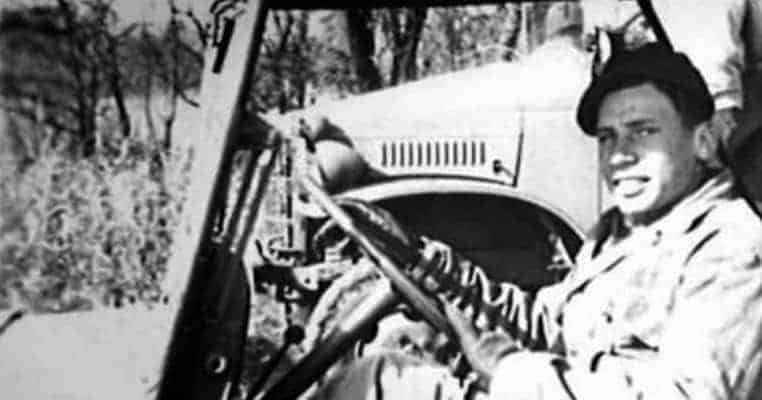 Many Don’t Know Mel Brooks was a WWII Warrior

Mel Brooks, the Brooklyn-born funnyman best known for directing side-splitting comedies such as Spaceballs, Blazing Saddles, The Producers, and Robin Hood: Men in Tights, is not somebody most people would associate with life and death type of dangerous work. Yet, that is precisely what Mel Brooks did during the Second World War when he fought the Nazis as a combat engineer clearing minefields under enemy fire and was in the thick of the Battle of the Bulge. As he put it: “I was a combat engineer. Isn’t that ridiculous? The two things I hate most in the world are combat and engineering“.

From Teen Comic to Soldier

Born Melvin James Kaminsky in 1926, descended from German Jews on his father’s side and Ukrainian Jews on his mother’s, Brooks was raised in poverty after his father’s untimely death when the future comedian was only two years old. Understandably, growing up without a father was rough, and it left its mark on Brooks, as a child and into his adulthood. As he put it decades later: “There’s an outrage there. I may be angry at God, or at the world for that. And I’m sure a lot of my comedy is based on anger and hostility“.

Growing up small and sickly in a borderline slum in Brooklyn, Brooks developed a sense of humor and a precocious comedic talent early on. It came in handy, and helped him defuse confrontations and avoid getting picked on and beaten up. At least, more often than not. Most people in his neighborhood worked in New York’s Garment District, but when Brooks was nine, an uncle took him to see a musical comedy on Broadway. After the show, the awestruck child declared his determination to never end up in the Garment District, but to make his living in showbiz instead.

It was not just a child’s flight of fancy: from then on, Brooks rolled up his metaphorical sleeves and set about making his wish come true. By the time he was 14, he had secured himself a gig as an entertainer at a swimming pool, and kept the crowds in stitches with his slapstick routines. At 14, he also apprenticed with jazz bandleader and drummer Buddy Rich, who taught him how to play the drums, and Brooks added “musician” to his repertoire. He also changed his name from Mel Kaminsky to Mel Brooks, to avoid getting confused with jazz bandleader Max Kaminsky.

Music gave Brooks an unexpected entry into the world of standup comedy: at 16, he was doing a gig as a drummer when an MC came down with an illness and was unable to perform. Brooks stepped in as a pinch hitter, and he hit it out of the park. Things were going well for Brooks, and he was en route to realizing his childhood dream of becoming a professional entertainer when his budding showbiz career was interrupted by WWII.

Brooks graduated high school in 1944, with nebulous plans to go to college and study psychology, but then decided to enlist in the US Army. As he described his decision: “I enlisted to go to college, not to be in, you know, foxholes and shot at. But listen, that’s what happens in a war. Being a kid of seventeen, eighteen, I was a peacenik, I was against war, but I knew what Hitler was doing to Jews. So, I really did feel this was a proper and just war, and a war that should be fought. My mother had four stars in her window. I think the limit was three if you had children in the army – that is, I think I could have gotten out of it, but I was gung ho at being a soldier“.

Like many American Jews, Brooks was extra fired up to fight the Nazis but was also well aware of the extra risks faced by Jews if captured by the enemy. As he put it: “My brother Lenny was an engineer gunner in a B-17, and in his 35th or 36th mission, his Flying Fortress B-17 was hit, and they all bailed out, and they landed in Austria. He knew he had an â€˜H’ [on his dog tags, for â€˜Hebrew’] and he had heard rumors that the Germans were taking Jewish troops and sending them to concentration camps. So on his way down, while still in his parachute, he ripped [his dog tags] off. ”

He scored high in the Army’s aptitude and IQ testing and wound up in the Army Specialized Training Program (ASTP). There, he was sent to learn important skills such as engineering, and some skills that were of dubious value in 1944, such as horseback riding and fencing. He did not get to complete ASTP, however, because the combat arms complained of the program’s absurdity, and that it deprived them of the brightest recruits. ASTP was duly terminated, and Brooks was sent to Fort Sill, Oklahoma, where he received training better suited to the needs of the war effort, as an artillery observer.

Sent to Europe in 1944, Brooks’ qualifications that got him into ASTP marked him out as a soldier of high intelligence. So his first assignment was as a forward artillery observer – a job that requires quick thinking on the fly. He was then assigned to a combat engineer unit, the 1104th Engineer Combat Battalion (ECB), attached to the 78th Infantry Division. Combat engineers often went out ahead of the main assaults, to clear out obstacles for follow on troops.

Brooks’ unit used demolitions to blast a way clear for the main forces, repaired bridges destroyed by the Germans in a bid to slow the Allied advance, built bridges from scratch, helped lay out and construct field fortifications, and otherwise offered whatever support they could. The combat engineers often did their work under the enemy’s noses, while subjected to artillery raining down on them, and German snipers doing their best to pick them off.

The 1104th ECB became the first unit to throw a bridge across the Roer River, and later on, it built bridges across the Rhine. Brooks’ tasks included clearing minefields and defusing land mines. It was a hairy job, that was made even hairier when he had to do it while exposed to enemy fire. As Brooks described it to Conan O’Brien on his show: “You take a bayonet, and you look for mines – planted mines. And they could blow a tank, I mean they’re big. â€¦ You find them, unearth them â€¦ if it could blow up a tank, it could certainly take away a Jew in no time“. On at least five occasions, Brooks’ unit had to down their tools and pick up rifles to fight as infantrymen, and took casualties while doing so. He also fought in the Battle of the Bulge during the winter of 1944-1945.

In recalling his WWII experience decades later, Brooks observed that: “War isn’t hell. War is loud. Much too noisy. All those shells and bombs going off all around you. Never mind death. A man could lose his hearing“. He distilled his wartime experience to its essence when asked what he thought during the war about saving Europe and the world: “You thought about how you were going to stay warm that night. How you were going to get from one hedgerow to another without a German sniper taking you out. You didn’t worry about tomorrow“.

Aware of the jarring contrast between his comedic persona and his serious wartime experiences, Brooks once mused to reporters: “I was a combat engineer. Isn’t that ridiculous? The two things I hate most in the world are combat and engineering“. On a more serious note, though, as a Jew, WWII had a special meaning for Brooks: it mattered to him that he had played his part in freeing Jews from the horrors of Nazism. His unit did not liberate any concentration camps, but Brooks came across many Jewish refugees who had survived the Third Reich, and their plight affected him.

The end of the war in Europe came while Brooks and the 1104th were carrying out a reconnaissance in the Harz Mountains of northern Germany. Brooks, by then promoted to corporal, had survived the war, healthy and hale, and had grown up and matured real fast from the teenager who’d enlisted just a year earlier. He closed his days in Europe by taking part in organizing shows and entertainments for American soldiers, as well as for Germans.

Finally, the time came for Brooks to return to civilian life, and resume his quest to become a professional funnyman. After the war, Brooks was discharged from the Army, and he went back to entertainment. He played drums and pianos in Borscht Belt resorts, and gradually worked his way to earning a living as a stand-up comic. He eventually made his way into the then-new medium of television, writing for programs such as The Show of Shows and The Admiral Broadway Revue. From there, his career expanded into acting, producing, and directing. He eventually became one of the most successful comic movie directors of all time, with a long resume of hits that include The Producers (1967), Blazing Saddles and Young Frankenstein (1974), Spaceballs (1981), and Robin Hood, Men in Tights (1993). He is one of the few performers to have earned an Oscar, an Emmy, a Tony, and a Grammy.

Like most WWII veterans, Brooks never viewed himself as a hero, and went out of his way to downplay his wartime experience. He simply saw himself as one of the many millions from his generation who had answered their country’s call, donned uniform and did their part, then returned home, happy to be alive. However, decades after the war, Brooks took one last shot at the Third Reich with his 1967 Hollywood hit, The Producers, which satirized Hitler and the Nazis.