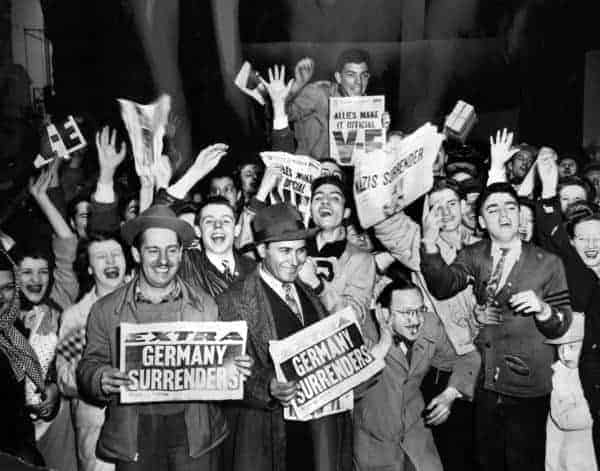 World War II remains the worst war in human history. The number of people who died is hotly debated amongst historians, but the estimates range anywhere from 60 million to 110 million deaths, and it could be much higher if one counts collateral damage.

The war itself began in September 1939 when Nazi Germany invaded Poland under the leadership of Adolf Hitler. The war would rage for the next six years, and would eventually flow over most of Europe. The war in Europe would coincide with Japan’s aggression in the Pacific, and Italy’s war in North Africa.

It was on May 8, 1945 when the Germans finally surrendered, ending the war in Europe. It would be a day that would be celebrated around the world, and would be come to be known as V-E Day (Victory in Europe Day). People took to the streets across the United States and Europe to celebrate the end of the deadly, grueling war on the European continent.

Many German troops were captured by the Soviets and held prisoner. In fact, as many as 2 million German soldiers were captured after the official surrender. Fighting between the Germans and the Soviets lasted until May 9, 1945, which is why for the longest time V-E Day was celebrated on May 9 in Russia instead of the 8th like it is everywhere else.

After the surrender, nearly 13,000 prisoners of war from Britain were released, and as many as 35,000 were released back to the United States.

The surrender of Nazi Germany was the end of the conflict, but not the end of the struggles for Europe. Not only did they have to rebuild from years of savage fighting, but they faced a new threat in Communist Russia, which was looking to spread its sphere of influence.

In Germany, the surrender meant the end of Nazi rule, and the start of a very slow rebuilding process. With the persecution and murder of more than 6 million Jewish people at Germany’s hands, it would be decades before Germany would be trusted again. The stain of the Holocaust may be present for all eternity, as it is one of the worst tragedies in human history.

The rebuilding of Europe would take years, and would cost billions of dollars. The United States helped by sending several billion dollars to Europe with the Marshall Plan. The Americans also helped found the North Atlantic Treaty Organization, or NATO, which assured the mutual protection of its member states. NATO was created to be an organization to help stop the spread of Communism, which was a real threat for the next 45 years.

While the war in Europe ended, the war in the Pacific continued to rage on. Japan would not go down easily, and many experts at the time predicted that the fighting could go on for at least another year after the surrender of Germany. Japan’s well-entrenched military was spread out on islands throughout the vast Pacific. President Truman became the first leader to use nuclear weapons in order to see World War II officially end in August 1945.