This Day In History: The Battle Of The Bulge Begins (1944) 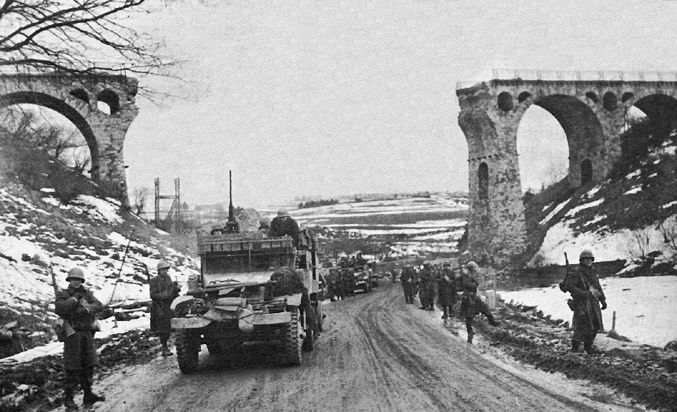 This Day In History: The Battle Of The Bulge Begins (1944)

On this day, one of the last great battles of WWII began in Belgium in 1944. The Battle of the Bulge was an attempt by the Germans to cut the Allied army in two and seize key ports. It was hoped that this would force the Allies to negotiate with Nazi Germany. The Germans launched ”Operation Mist” better known as the Ardennes Offensive or the Battle of the Bulge. The offensive is best known as the Battle of the Bulge because of the â€˜bulge’ that the German army created in the allied lines. The Germans threw almost a quarter of a million men into the offensive and it was for them the last throw of the dice. They were opposed by just over 80,000 American troops. The Germans attacked the American units at their weakest point. There was a 50 mile stretch of the lines that was not properly guarded because it was believed that the terrain was not suitable for an offensive. The Germans were lucky, a thick fog covered their assault and prevented the allies from launching air attacks against them. The Germans were able to overwhelm several American units and more were forced into a headlong retreat.

The Germans employed English-speaking agents to sow confusion among the American units. These commandos destroyed communication lines and attacked rear line units. This was a very effective tactic and the Americans mounted checkpoints to discover the commandos. This all tended to slow down the American and the allied response to the offensive.

The Germans used their Tiger and Panther tanks very effectively and they inflicted heavy losses on the Americans.

The Battle of the Bulge was to rage for three weeks. The Nazi army was able to encircle an American unit at Bastogne, despite being surrounded they refused to surrender. However, other American troops did surrender and in one instance some seven thousand men surrendered. They helped to slow down the Nazi advance. The Germans committed several atrocities and killed American POWs and Belgian civilians. The Americans staged a counter-attack after two weeks. The American High Command threw every available man into the conflict and in total, some half a million men fought in the Battle. Such was the ferocity of the fighting that some G.I.s deserted. General Eisenhower demanded the death penalty for any American who deserted during the battle.

The Battle was a brutal affair and it was only the break in the winter weather that allowed the Americans to turn the tide. The extreme weather lifted and this allowed the US air force to attack German units from the air. The Germans lost many tanks to American planes and they were soon on the retreat. The Americans and the allies were soon to re-take the initiative and by the New Year were able to cross the Rhine and into Germany. It is estimated that some 20,000 Americans were killed in the Battle of the Bulge.