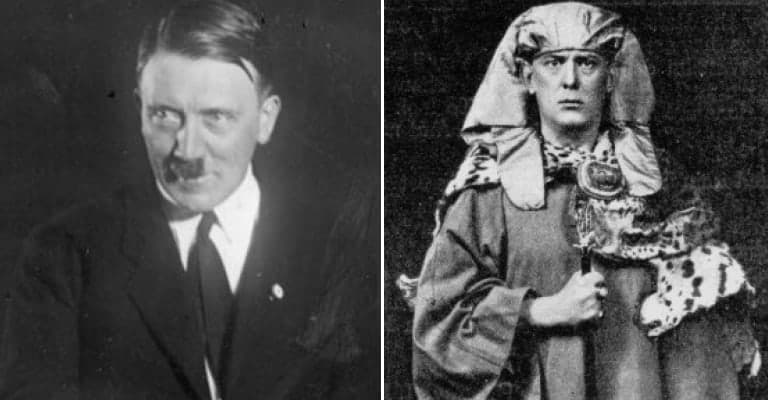 In Raiders of the Lost Ark, Indiana Jones has to battle a group of Nazis, who are intent on finding the Ark of the Covenant and exploiting the power within. While the story seems to be fantasy at best – especially considering that Nazism was officially nonreligious – there may be more truth to it than meets the eye. The Nazis were obsessed with esoteric beliefs, especially the occult. Some historians have even suggested that the occult formed the foundation of the Nazi movement. Both during the era of the Third Reich and in the time since, people have had a lot to say about Hitler and his associates dabbling in occultic practices.

Nazi symbology is replete with images and symbols from Eastern religions. For example, though the swastika is synonymous with the Nazi regime, it is actually derived from Sanskrit and has long been associated with well-being and good fortune among many different cultures, including Indian Hindus and Buddhists. In fact, the word “swastika” is Sanskrit and means good luck, well-being, or good existence. It is one of many symbols that was usurped by the Nazis, possibly because of its links with esoteric religion and occultic practices that had made their way into Europe.

One of the top Nazi officials was Heinrich Himmler, the man in charge of the dreaded SS, and Himmler was known to engage in the occult. He followed the paganism of pre-Christian Germany, something that was strongly associated with the German nationalism of the Nazi regime, and actively involved with black magic. He tried to practice necromancy, the magical art of raising people from the dead, and frequently heald seances to try to contact the dead. The center of his occultic life was a place called Wewelsburg Castle, in the black forests of northern Germany. Here, he and many other Nazi officials engaged in their occultic practices.

After Himmler took over Wewelsburg Castle, he tried to establish it as an SS training ground. This effort ultimately proved unsuccessful, so he used it to train SS officers in much more narrower areas: namely, Medieval folklore, pre-Christian Germanic history, genealogy (to propagate the Aryan myth of German descent, which has long since been refuted), and participate in teaching and carrying out black magic. Wewelsburg Castle had a scientific library, which made the work done there look like it had a solid, factual basis. Because of Himmler and his beliefs, the occult was at the heart of much of SS activity during the years of the Third Reich.

In addition to being used as a research center, Wewelsburg Castle was at the center of archeological excavations in the northern part of Germany. A team of SS scientists used archeology to try to understand pre-Christian and Medieval German history better to further buttress the Nazi worldview. Their findings and the claims resulting from them, many of which cannot be independently substantiated, were used to build up the library at Wewelsburg further. They were also used to educate the people in the nearby villages about the Nazi worldview and its allegedly historical and scientific bases.

However, in addition to all of these things, Heinrich Himmler tried to position Wewelsburg Castle so that it would symbolically be at the center of the world. His purpose was simple: he believed that a giant apocalyptic battle would be fought in the vicinity and wanted to use black magic to ensure victory for the Nazi regime. Himmler’s infatuation with sorcery and occultic practices definitely added a colorful flavor to the regime’s ideology. As the leader of the SS, he was a close friend and confidante of the Fuhrer, Adolf Hitler, and thereby shaped the views of the entire Nazi party.

Rudolf Hess and the Thule Society

Not to be confused with Rudolf Hoess, the commandant of Auschwitz, Rudolf Hess was one of the highest-ranking Nazi officials. He was with Adolf Hitler when he tried to initiate a coup in Bavaria in 1922’s failed Beer Hall Putsch, and the two served a prison sentence together. While in prison, Hitler dictated much of his autobiography, Mein Kampf, to Hess. Once they got out of prison, Hess stood beside Hitler as he took control of the NSDAP (known merely as the Nazi Party) and, when Hitler became Fuhrer, became his Deputy Fuhrer. He was second in line for succession.

Hess’ spiritualism may have actually exceeded that of Himmler. He was a member of the Thule Society, an esoteric organization that was so named after a mythical country in the north -presumably Germany – that Greek mythology spoke of. The Thule Society was founded during World War I by German nationalists who, like Hitler, found Germany’s capitulation at the end of the war to be an abomination. At the center of the organization were beliefs about the Aryan race, a pseudoscientific assertion that the German people had descended from the same people as those of the Iranian-Indian plateau. To join, people had to swear to a pure Aryan lineage.

Anton Drexler, the leader of the right-wing National Socialists and mentor to the young Adolf Hitler, was a member of the Thule Society. Many have asserted that Hitler was also a member, but there is no evidence that he attended any of the meetings or shared in any of its esoteric beliefs and practices. However, he certainly subscribed to its extreme right-wing nationalism. For members of the Thule Society, this nationalism was undergirded with esoteric beliefs, particularly regarding pagan German religion, and practices associated with the occult. Rudolf Hess was probably the highest-ranking Nazi official who was an avowed member.

Hess’s involvement with the Thule Society, and with Nazism, ended in 1941 when he undertook a solo flight to Scotland. No one knows the exact reason behind the flight that he took, but many believe that he wanted to hand the United Kingdom over to Germany. Possibly he was trying to garner favor with Hitler, as his influence within the Nazi Empire had begun to wane substantially. He told Scotland’s Duke of Hamilton that he was there without Hitler’s knowledge, and in doing so, sacrificed any political immunity that he might have had.

The British imprisoned Hess, and he never got out. Seeing the flight to Scotland as a personal betrayal, Hitler completely disavowed his Deputy Fuhrer and made no effort to have him released. Also, he had many of Hess’s associates rounded up; a large number of them had, like him, been members of the Thule Society. All of its esoteric practices, such as fortune-telling and engaging in black magic, became contraband. As a result, the influence of the occult in the Nazi Empire came to a close, except for other members of the Nazi party who, like Himmler, had positions of power.

There were plenty of lower-ranking members of the Nazi Party and even the general public who espoused the occult. Some held to it as the epicenter of German nationalism, while some believed that they could use it to contact dead ancestors or loved ones. Others saw it as an alternative to the traditionalism of organized religion or as a means of reconnecting with their heritage. Whatever the reason, people frequently found themselves getting into trouble with the Nazi Party, especially when the magic that they had used was fulfilled or predictions that they made came true.

One such individual was Karl Ernst Krafft. Krafft was an astrologer, someone who made predictions based on patterns in the night sky, who was born in Basel, Switzerland. In 1939, he predicted that in November, between the 7th and the 10th, there would be a plot to assassinate Hitler. That prediction proved to be true, as a bomb at the Munich Beer Hall, meant for Hitler, killed seven people and injured scores on November 8. When word of the prophecy reached Rudolf Hess, he had Krafft arrested. An occultist himself, Hess became convinced that Krafft’s gift for prophecy was genuine.

Krafft then became employed by the Nazi Empire to try to understand the prophecies that Nostradums, the Medieval sage and seer, had made five hundred years prior. The Nazis, including Hitler himself, were interested in seeing which of his predictions were favorable to them. However, after Hess’s disastrous flight to Scotland and the Nazis cracked down on occultists, Krafft was arrested and sent to prison. He would never get out; he died in prison in 1945. Ironically, the fortune-telling “gift” that he claimed to have would lead to his almost downfall and then rise in the Nazi party before he would die in a Nazi prison.

In addition to Krafft, Johann Dietrich Eckart was a fortune-teller who supported prophecies that he believed were favorable to the Nazi Party. He was an associate of Hitler even before the 1922 Beer Hall Putsch and, like Hess, was a member of the Thule Society. The Thule Society believed that a long-awaited Messiah would emerge in Germany and deliver it from the humiliation and woes of World War I and the Treaty of Versailles. Eckart thought that Adolf Hitler was that Messiah and supported his rise to the rank of chancellor and then fuhrer.

Eckart particularly appreciated a prophecy by Nostradamus that claimed, “Beasts ferocious with hunger will cross the rivers; the greater part of the battlefield will be against Hister,” along with references to a “Child of Germany.” Eckart’s support of Hitler, combined with his position within the Thule Society, helped garner the support of occultists and other followers of esoteric spiritualism for the rising leader of Germany. Even though Hitler was not a spiritualist himself, he may not have enjoyed the success he had without his occultic followers.

“Will We Ever Know Why Nazi Leader Rudolf Hess Flew to Scotland in the Middle of World War II?” by Brian Handwerk. Smithsonian.com. May 10, 2016.