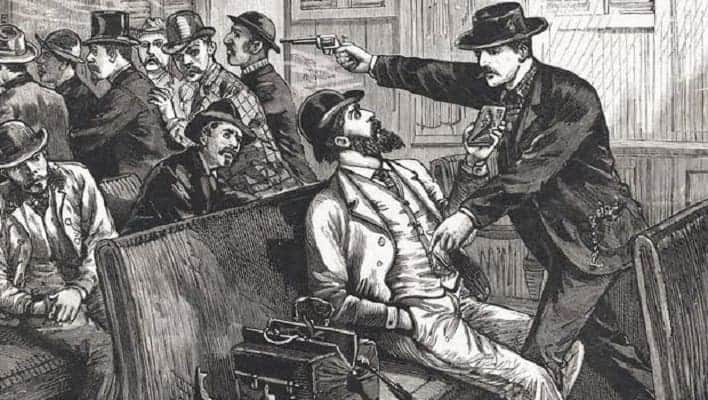 Jim Miller got a job as a Texas Ranger, and began to advertise his availability as a killer for hire. Charging $150 per murder, he used his Ranger authority to get away with literal murder. As his reputation grew, so did his fees, until he was eventually charging thousands of dollars per killing. He had no scruples about killing lawmen and is credited with murdering Pat Garret, who had killed Billy the Kid.

In 1909, Miller was hired to kill a popular rancher from Ada, Oklahoma, named Allen Bobbit. Miller shot Bobbit, but he lived long enough to name his killer. Miller and three accomplices were arrested, but the evidence seemed weak, leading many Ada residents and friends of Bobbit to fear that his killers might get acquitted. So they formed a mob, broke into the jail where the accused were held, and lynched the deadly Miller and his accomplices in the early morning hours of April 19th, 1909.

As US forces fought to retake the Philippines in 1944, 22-year-old Japanese Imperial Army Lieutenant Hiroo Onoda was sent on a reconnaissance mission to the island of Lubang. An intelligence officer specially trained as a commando, Onoda was directed to spy on American forces in the area and conduct guerrilla operations. He was ordered to never surrender, but also expressly ordered that, under no circumstances, was he authorized to take his own life.

On Lubang, senior Japanese officers meddled and prevented Onoda from carrying out his mission. Within months, American forces invaded the island, and in short, order killed or captured all Japanese personnel, with the exception of Onoda and three other soldiers. Taking charge of the survivors, Onoda took to the hills. Over the following years and decades, Onoda would prove himself a deadly diehard – or bloody-minded idiot – who would claim the lives of dozens while continuing to fight a war that had already ended.

With American forces overrunning the Philippines and overcoming organized Japanese resistance on the archipelago, Lieutenant Onoda scurried about the rugged terrain of Lubang. He was cut off from communications with his chain of command, and so did not receive official word of the Japanese capitulation in 1945. Without new orders countermanding his last received instructions to fight to the death, Onoda displayed a single-minded devotion to what he claimed was his duty, hid in the jungles and mountains of Lubang, and fought a deadly one-man war for 29 years.

For nearly three decades, Onoda survived with his tiny command in the dense thickets of Lubang. They erected bamboo huts and eked out a living by hunting and gathering in the island’s jungle, stealing rice and other food from local farmers, and killing the occasional cow for meat. Tormented by heat and mosquitoes, rats and rain, Onoda’s band patched their increasingly threadbare uniforms, and kept their weapons in working order.

Over the years, Lieutenant Onoda and his tiny band came across various leaflets announcing that the war had ended. However, they dismissed them as “fake news” – enemy propaganda and ruses of war. On one occasion, they encountered a leaflet upon which had been printed the official surrender order from their commanding general. They examined it closely to determine whether it was genuine and decided that it must be a forgery. Even when they recovered airdropped letters and pictures from their own families urging them to surrender, Onoda’s band convinced themselves that it was a trick.

As the years flew by, Onoda’s four-man contingent steadily dwindled, as he lost comrades to a variety of causes. In 1949, one of them simply left the group, wandered alone around Lubang for six months, and eventually surrendered to authorities. Another was killed by a search party in 1954. His last companion was shot dead by police in 1972, while he and Onoda were trying to burn the rice stores of local farmers. Onoda was thus finally alone. Yet he kept on fighting, faithful to his last received orders, doggedly conducting a deadly one-man war.

In 1974, a traveling Japanese hippie backpacker found Onoda and befriended him. He managed to convince the holdout that the war had ended decades earlier, but Onoda still refused to surrender, absent orders from a superior officer. Returning to Japan with photographic proof of his encounter with Onoda, the holdout’s new friend contacted the Japanese government, which in turn tracked down his former commanding officer.

Traveling to Lubang, Onoda’s wartime commander personally informed him that the war was over, that he was released from military duty, and ordered him to stand down. In 1974, clad in his battered and threadbare uniform, Lieutenant Onoda handed in his sword and other weapons to representatives of the US and Filipino military and finally brought his war to an end nearly three decades after WWII had ended.

Lieutenant Onoda returned to a hero’s welcome in Japan. However, admiration for his single-minded devotion to duty was not universal. Back in Lubang, the inhabitants did not view Onoda as a conscientious and honorable man devoted to duty. Instead, they saw him as a bloody-minded deadly idiot. During his 29 year holdout, Onoda had inflicted sundry harms upon the Lubangese, stealing, destroying, and sabotaging their property. He also needlessly killed about 30 local police and farmers with whom his band had clashed while stealing or “requisitioning” food and supplies, in order to continue fighting a war that had ended decades earlier.

A militarist through and through, Onoda believed that the war had been a sacred mission. The pacifist and futuristic Japan to which he returned were unrecognizable to him. Onoda found himself unable to fit in a country and culture so radically different from the one in which he had grown up. Within a year of returning to Japan, he moved to Brazil, where he bought a cattle ranch, settled into the life of a rancher, married, and raised a family. He died in 2014, aged 91.

A $4000 “Dead or Alive” reward was placed on Hardin. Choosing discretion over valor, he fled Texas with his wife and daughter, and settled in Florida as a businessman, using an assumed name. That peaceful interlude lasted until 1877, when Texas Rangers caught up with Hardin on a train in Pensacola, Florida. He tried to draw his pistol, but it got snagged on his suspenders, and the Rangers pistol-whipped him into submission.

In 1894, Hardin was pardoned after serving 17 years of his sentence. Upon his release, he took and passed Texas’ bar exam, and became a licensed lawyer. He moved to El Paso in 1895 to start a law practice but got into trouble when he quarreled with John Selman, a lawman who had arrested a prostitute friend of Hardin. Heated words were exchanged, and that night, as Hardin was playing dice in a local saloon, Selman walked up to Hardin from behind, shot him in the back of the head, then pumped three more bullets into him as lay on the ground.