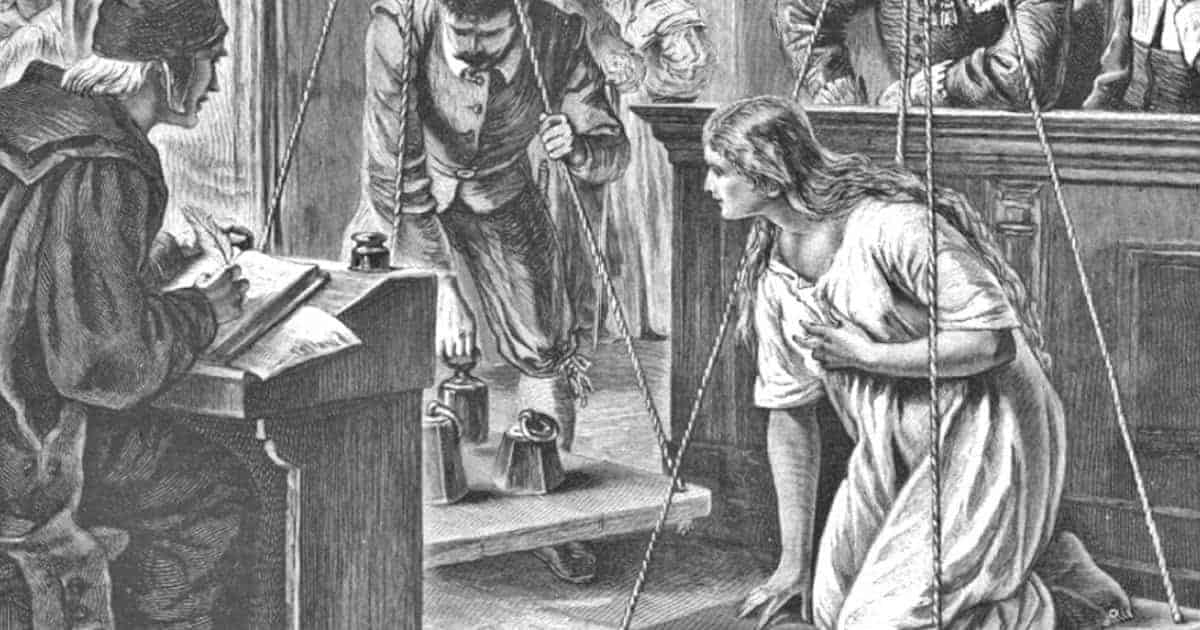 Most people are aware of the Salem Witch Trials that occurred in early 1690s colonial Massachusetts. However, many are unaware of the witch hunt’s origins. While the Salem Witch Trials were wildly popularized in books, television, and movies, the long forgotten stepping stones of wrongful persecution happened long before any colonial stepped foot in North America. Witch hunts and executions were largely in France, Belgium, Luxembourg, and the Netherlands. Most modern day estimates of the total number of people executed for witchcraft in Europe are between 40,000 to 50,000. That is a staggering number of innocent lives lost based on superstitious fears or political motivation.

In 1484, Pope Innocent VIII issued a Papal Bull; an official Church document that condemned witchcraft. The Pope set forth two inquisitors, Jakob Sprenger and Heinrich Kramer, to enforce his new anti-witchcraft law. Sprenger and Kramer produced a book, The Hammer of Witches, that both Protestants and Catholics accepted as an authority on witchcraft. The book contained combinations of both fanciful stories regarding witches and legal arguments against witchcraft. The document provided step by step guidelines on how to identify a witch and a witch’s magic. It is considered perhaps one of the most dangerous books ever written in history due the repercussions witch hunts had on Europe’s populations.

Witchcraft was a crime persecuted with no actual evidence of guilt. The only requirement was a confession from the accused. Such a confession could be gathered by means of torture; depriving the accused of sleep, attempted drowning, and finger and hand torture were all methods an investigator could use to retrieve a confession from a supposed witch. A person deprived of sleep and beaten to a pulp would have been willing to admit to almost anything to avoid any more pain and agony. While most torture methods did become outlawed during the 1600s thanks to more enlightened thought, that did not stop the most zealous of witch hunters from gathering confessions by any means necessary. Witch hunters gained fame and fortune for their persecutions. Very few saw a loss in their reputation. Witch hunters were regularly sought out and employed by villages seeking to imprison and kill the least desirable members of their village.

Over seventy percent of the accused were widowed women. The remaining accused were the poor, elderly, or herbal dispensers. Unfortunately, the truth of the witch trials was that it was largely a system used to weed out women who were otherwise unattached and childless. An irritable, fiery personality seen in women between 40 and 60 was of concern to the community. Undesirables in the community were systematically weeded out by use of the witch trial, however, in the end, no one was truly safe, regardless of class or status. A surly priest was as likely to see flames as a dirty hermitess.

Any misfortune could be blamed on a witch; a frost, a low milk producing cow, disease, or unexpected death. Even benign markings like moles, scars, or birth marks could be used against the accused. The marks, known as “devil’s marks” were said to be extra teats to feed the witch’s familiar, pets that were used to directly communicate with the Devil himself. Clearly, superstition superseded logic during these dark times.

When one thinks of witch trials, immolation, or being burnt to death, was not the main form of execution. Even during the Salem Witch Trials, immolation was banned by English law. Most were hanged, beheaded, or crushed to death by stone. Regardless of how these individuals met their fate, one thing is certain: the absurd accusations were unfounded and their unjust deaths were cruel. We are fortunate to live in a time where one’s innocence exists until proven guilty, and witchcraft is no longer a punishable crime.

Lesser known trials occurred all over Europe. The first witch hunt is thought to have originated in France and Switzerland. Beginning in the French speaking southern region of Valais and then spreading to German-speaking Wallis in 1428, delegates from different districts began investigations on any persons accused of witchcraft or sorcery. The trials were not documented well, but the accounts that we do have come from Johannes Fründ, a local court clerk. It is estimated that over 367 victims met their death by immolation or torture. An equal number of men and women were killed during this time.

Over 100 years later, one of the deadliest witch trials in European history occurred in Germany. Between 1581 and 1593, 22 villages were affected by the hunt. From the 22 villages, 368 accused men and women burned to death. Many believe the motivation for the German witch trials were largely political; over a third of those who lost their lives were nobility or held government positions. Judges, councilmen, and priests were condemned to heinous deaths. So why did such a non-discriminate witch hunt occur? Newly-appointed Archbishop Johann von Schöneburg, in an attempt to prove his loyalty to the Jesuits, demanded a purge of Jews, Protestants, and witches.

While the deadly German witch trials were coming to an end, a new set of trials was occurring thanks to England’s new king, King James VI. King James of Scotland was traveling to Copenhagen to marry Princess Anne of Denmark. While traveling, a terrible coastal storm rerouted the ship, requiring the King and its occupants to take refuge in Norway for several weeks. When the storm was blamed on witches who wanted to kill King James, this led King James to believe an entire population of witch’s was determined to curse and kill him.

King James’ conspiratorial notion motivated him to write “Daemonologie,” a book advocating witch hunts. This single book would justify the deadly actions to come. With King James’ endorsement, a new breed of so-called witch hunters, led both by ideology and fame and fortune, set forth to rid Europe of all witchcraft. Again, even the Scottish nobility was accused, cementing the fact that no one was safe. These trials are known today as the North Berwick witch trials. They are the first recorded witch hunts in Scotland, however they spawned many subsequent trials, with an estimated death toll of 3,000 to 4,000 lives between 1560 and 1707.

It is said William Shakespeare was so impacted by the North Berwick witch trials, Macbeth incorporates many aspects of the trials. His adaptation supposedly included many of the torture rituals used to produce confessions from the accused. It is clear that even in the midst of these terrifying trials, they inspired noteworthy art and literature. Modern times, far removed from the danger witch trials posed, have continued to show that both the fantastical and historical aspects of witchcraft stand the test of time and intrigue us all.

Many witch trials were happening simultaneously to the Salem Witch Trials, which occured over the span of about a year, from February 1692 to May 1693. The witch trials are often thought of as an English and English Colonial fixture; yet, most trials happened outside of England, Ireland, and Scotland. One of the largest mass killings in witch trial history took place in Sweden.

The bloody massacre happened in a single day. One fifth of all the women in the region were beheaded and burned. A total of 71 people, 65 of those female, met their fate when minister Laurentius Christophori Hornæus of Ytterlännäs was told to investigate signs of witchcraft in his parish. Just how were the witches accused? Hornæus instructed two young boys to perform a simple task. The boys were to stand by the church’s entrance. As each attendee walked through the church’s doors, the boys would identify those who had made allegiance with the Devil by the invisible mark’s on their forehead.

To Hornæus’s consternation, his own wife was “seen” with the invisible mark. Hornæus quickly hushed any rumor of his wife’s supposed acquaintance with the Devil and that matter was never discussed again. It was suspected the accused were kidnapping local children and forcing them to take part in Satan’s Sabbath. Satan’s Sabbath was a series of eight festivals celebrated by pagans. The festivals were said to take place in a meadow popularized by Swedish folklore. The meadow was called Blockula, and according to local stories, the Devil held court here.

The Swedish trials are an interesting piece of witch trial history. A common thread in all witch trials stories is the torture of the accused. In the Swedish trials, however, young children were threatened and abused. In order to retrieve accusatory testimonies about community members, The children were beaten, whipped, bathed in frozen lakes, or threatened with being baked in ovens. Adult testimonies were not often sought out and children provided the bulk of accusations against the accused. Perhaps the abuse of the children involved led to the illegitimacy of these trials.

Records of these trials are few and far between. The primary source was recorded 60 years after the last Swedish witch hunt execution. The grandson of minister Hornæus reported his grandmother’s eyewitness accounts. Since the commission and local courts failed to report any of the executions to a higher court, the Swedish witch trials were not perceived as ideologically legitimate, but rather an extra abhorrent abuse of power.