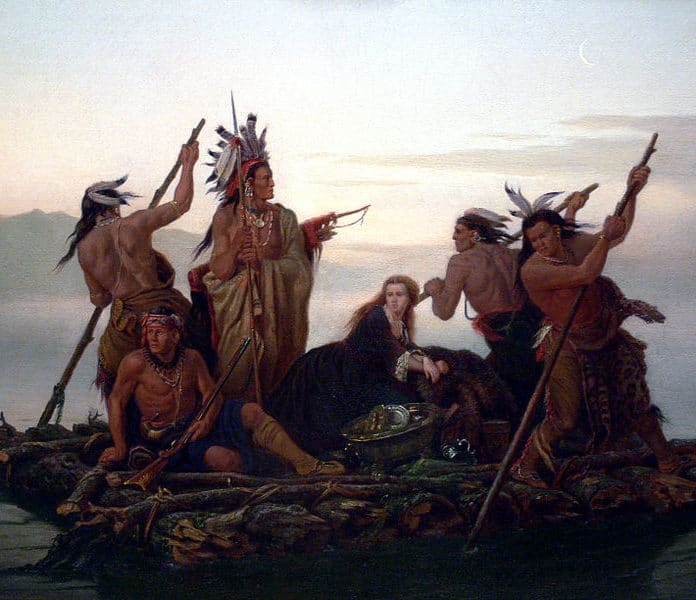 During the American Revolution the settlements in Kentucky – then a part of Virginia – and along the Ohio River in what is now West Virginia were threatened by Indian tribes. British rangers, mostly comprised of Loyalists, led attacks in coordination with the tribes. The Delaware, Mingo, Miami, Ottawa, Potawatomi, and Shawnee raided colonial settlements. Kentucky and Virginia militia fought back, including raids on villages in the Ohio country along the Mad, Great Miami, and Little Miami Rivers in Ohio. The Indians seized hostages and took scalps, both of which brought them rewards from the British at Fort Detroit. Throughout the war the raiding continued across the frontier.

Bryan’s Station was a Kentucky settlement founded at present day Lexington in 1775. The Station was a settlement supported by a fort, as was common in the region. During the American Revolutionary several such Kentucky settlements, including Ruddle’s (sometimes spelled Ruddell’s) Station and Martin’s Station, were attacked and their inhabitants massacred by Indians who then fled back to their villages along the rivers north of the Ohio. Boonesborough, to the east of Bryan’s Station, withstood a major attack and short siege in 1778. The founder and leader of Boonesborough, Daniel Boone, was court-martialed following the siege, though he was acquitted and promoted to the rank of Major. Here are some of the events in the Ohio and Kentucky territories during the American Revolutionary War.

1. Daniel Boone was just one of many superb woodsmen in the Kentucky Territory

Daniel Boone was arguably the most famous of the woodsmen who settled in Kentucky but he was not the first. Harrod’s Town, later renamed Harrodsburg, was settled in 1774, on land which was used as hunting grounds by several Indian tribes including the Cherokee, Shawnee, and Chickasaw. Boone visited Harrod’s Town on a mission to recruit frontiersmen to serve in Lord Dunmore’s War. The war ended when a treaty was agreed to by the Shawnee Chief Cornstalk. The Shawnee gave Virginia the lands south of the Ohio River in the treaty, which now make up the states of West Virginia and Kentucky.

The American Revolutionary War began in 1775. British agents and Loyalist woodsmen incited the tribes in Ohio and Kentucky to attack the western settlements. The agents were equally skilled in the ways of the frontier, and included the three Girty brothers, George, James, and the notorious Simon. All had been raised by Indians after being taken hostage and adopted into separate tribes. Simon Girty was raised by the Seneca, and built for himself a reputation as a fierce warrior and superior tactician in frontier fighting and raiding. He was widely respected by the Indians, and greatly feared by the white settlers for his merciless treatment of those who found themselves under his knife.