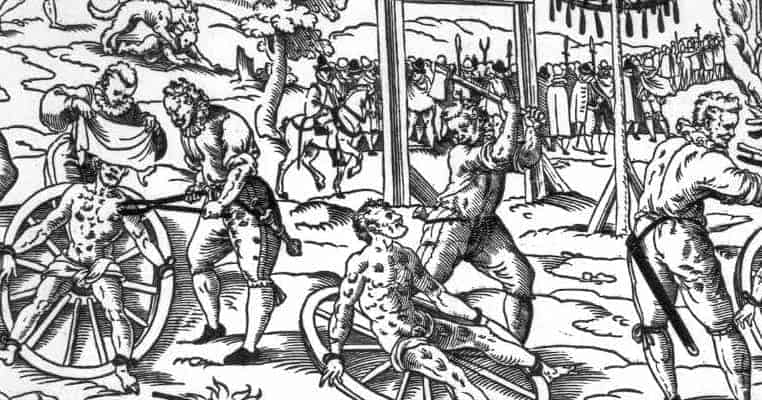 16. The Torture Rack could tear off limbs and rupture organs

Although primarily a method of extracting information, the Torture Rack could also be a method of execution, whether by design or miscalculation. Quite simply, the torture rack was a wooden frame containing a series of rollers, around which ropes were tied. The victim was placed on the rack, their limbs spread out and tied with the ropes, which could then be tightened by means of a lever. The effect was to stretch the body beyond its natural limitations, dislocating the limbs and even severing them entirely. Death came from loss of blood or the over-stretching and rupturing of internal organs.

Invented by the Romans, the Torture Rack was wheeled out throughout the medieval and Early Modern periods in Europe pretty much whenever heresy or conspiracy was afoot. The Rack was thus a widely-known, and widely-feared, instrument for centuries. In the sixteenth century, the Baron Scanaw of Bohemia was accused of heresy and sentenced to be tortured on the rack to extract a confession and the names of his co-conspirators. His dread was such that he cut out his own tongue to avoid it. Cruelly, the court simply changed his sentence to being executed on the Torture Rack. Nice try, Baron.

17. Some people were tortured by having their flesh torn off with red-hot pincers

Like the wheel, the invention of pincers gave the human race an important technological advancement. They ensured that red-hot metals could be handled, and thus iron could be manipulated to make items such as swords, buckles and, eventually, cannon. Their ability to withstand incredible heat, however, meant that they provided a cruel and extremely painful method of torture. With brutal simplicity, torturers could heat the pincers up to high temperatures until they glowed red, before pinching bits of a victim’s flesh and tearing them off. Standard blacksmiths’ pincers were modified for this task by being sharpened or spiked.

Red-Hot Pincers also offered the most painful way of castrating a criminal. Although most commonly used to extract confessions or information, the injuries resulting from the flesh being torn could lead to deadly infection or severed arteries. Sometimes the wounds would be filled with boiling liquids to increase the torment. Often pincer-torture was incorporated into an elaborate execution. Michel Foucault memorably discusses the execution of Robert-FranÃ§ois Damiens, whose failed assassination of Louis XV saw his flesh torn off in certain places with red-hot pincers, the wounds filled with molten lead and sulfur, and his body finally torn apart by horses.

18. Some people were eaten alive by Rats

Rats will eat pretty much anything, alive or dead. Many are the semi-legendary tales of people partially eaten by rats after a fall or non-lethal heart attack, but this tendency was once seen as useful to the state in many countries, rather than annoying. At the Tower of London in Elizabethan times, there was a cell dubbed â€˜The Dungeon of Rats’, located below the waterline of the River Thames. At high tide, the local rats would head into the cell to escape the rising water and take advantage of the free meal afforded by the injured and shackled prisoner.

Where the English were content to look the other way and let the rats go about their horrible business, during the Dutch Revolt against Spain in the seventeenth century, the dissident Dutch leader Diederik Sonoy did not want to leave anything to chance. He would bind his prisoners to a table, place a rat in a cage on top of them, and heat it up. The rat would desperately attempt to escape the searing heat by burrowing downwards… through the victim’s chest. In this way, Sonoy extracted crucial information about Spanish movements and, presumably, learned a lot about rodent biology.

19. Death by a Thousand Cuts involved considerable skill and an agonizing death

Known in China as ling-chi, Death by a Thousand Cuts was practiced well into the 20th century in the country. In this form of execution, a victim was tied to a cross on a table which also contained a basket of razor-sharp knives, each with a different part of the anatomy written upon it, which was covered with a cloth. The executioner would slip his hand into the basket and draw a knife at random, like a diabolical raffle. He would read the knife’s inscription, and then slice the designated part of the body, before randomly selecting another blade.

The victim’s death could, technically, be instant. For amongst the knives (a thousand is obviously an exaggeration) was one instructing the executioner to stab the victim fatally through the heart. The executioner would have to keep the victim alive for as long as possible, which required near-medical knowledge of the limits of the human body. This also allowed an opportunity for bribes to be taken from friends and family to go straight for the heart. One modification of the execution was for amputations to be carried out rather than simple cuts, albeit in a prescribed order with a single knife.

20. Thank God we’re so civilized today… actually, what about Waterboarding?

You were just beginning to rest on your laurels, weren’t you? Unfortunately, even in countries which are not run by despots, torture still goes on, and Waterboarding is by far the most notorious example. Water torture is an ancient practice, which aims to threaten the victim with drowning to extract information. Waterboarding is a slight modification of the technique, in that it intends only to simulate the terrifying experience of drowning, rather than actually drowning the victim. In Waterboarding, all that is required is a strip of cloth, a bucket of water, a victim… and a badge of authority.

The cloth is lain over the victim’s face, who is inclined at an angle of 10-20 degrees. Water is then poured over their face to fill the mouth and nostrils, causing such distress that information is usually given up. In some cases, the victim is killed, but other severe injuries can include brain damage from oxygen deprivation, damage to lungs, and broken limbs from struggling against restraints. The long-term psychological impact is utterly appalling, too. Despite this, during the War on Terror, the US government repeatedly stated that it did not see Waterboarding as a form of torture.

Waterboarding is used in military training, and some people have described their experiences. Chris Jaco, a former military pilot, underwent Waterboarding as part of his training, aged just nineteen. â€˜It felt like you were choking to death on water and couldn’t stop it from being that way’, he remembers. â€˜I was throwing people off of me because it was so overwhelming… It was like, I can’t breathe, water’s going up my nose and my throat was basically filled with water.’ And that’s despite Jaco knowing that he wouldn’t actually be drowned by his instructors. Haven’t we progressed as a species?

Ranker – A Step-By-Step Walk-Through Of Keelhauling, One Of The Most Horrific Punishments Ever Devised

Tudor Dynasty – Types of Execution and Victims of Henry VIII

How Stuff Works – The ‘Hanged, Drawn and Quartered’ Execution Was Even Worse than You Think

Grunge – How the Catherine Wheel Became a Dark Form of Torture

Grunge – Messed Up Things That Happened At The Tower Of London

Medium – Death by a Thousand Cuts

Abbott, Geoffrey. The Book of Execution: An Encylopedia of Methods of Judicial Execution. 1995.

Abbott, Geoffrey. Rack, Rope and Red-Hot Pincers: A History of Torture and its Instruments. 2002.

HamadÃ©, Kassem. “World-Exclusive: ISIS Commander on the Run Tells of the Terror Inside the Terrorist Sect.” Expressen, October 11, 2017.

Kellaway, Jean. The History of Torture and Execution. London: Mercury, 2003.

Scott, George Ryley. A History of Torture and Death. 2008