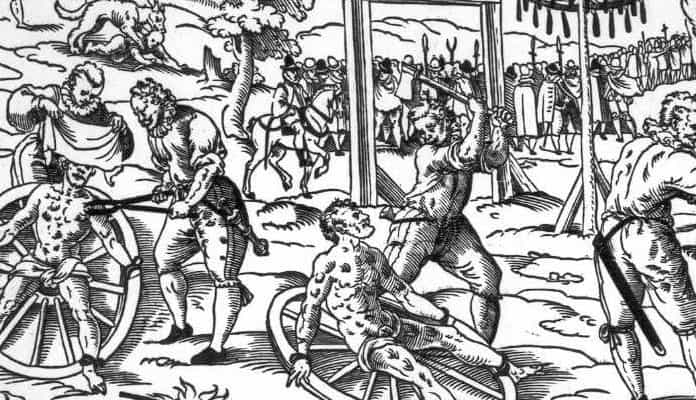 Prostitution is famously known as the oldest profession in the world. Coming in at a close second, however, must surely be torture and execution. Archaeologists have found evidence for execution in the Neolithic period amongst nomadic peoples, predating civilization. Although it is hard to determine whether these old bones tell a tale of sacrifice to ancient gods or the willful despatch of undesirables is hard to ascertain, it is clear that killing people has been a part of the human psyche since early in the evolution of human behavior. Today, many countries and cultures continue the ancient tradition of execution.

Torture and deliberately painful means of execution have a similarly ancient origin. Reacting to enemies with physical aggression is a natural instinct across the animal kingdom, and humans are no different in this. As man evolved better technologies, so too his means of hurting and/or killing others became proportionately more sophisticated. As we will see in this list, civilization has thus produced some truly appalling methods of punishing wrongdoers. Most, thankfully, have been consigned to the realm of legend and folklore, but some are still practiced in some parts of the world in the 21st century. Are you sitting comfortably?

1. Being sewn inside a dead horse is not only disgusting, but lethal

This was a simple but effective way of killing people. The victim would first have their limbs broken to prevent escape, and would then be squashed and sewn into the belly of a dead horse. The carcass would then be left to rot outside the city, and abandoned to the animal kingdom’s scavengers: jackals, wild dogs, wolves, vultures, depending on the part of the world where the practice was being carried out. These creatures would, hence, eat the victim alive – provided that they were not already suffocated by the fumes of decomposition from the equine carcass itself. Absolutely revolting.

The punishment was common in the early years of Christianity, and is amongst the atrocities against Christian martyrs with which Nero is charged. An Ancient Greek version inflicted upon Christians is recorded in Lucian’s Dialogues of the Dead. Lucian records were an assembly deliberating over how to punish and kill a Christian woman with maximum cruelty that decide to sew her inside a dead ass, with only her head exposed. Not only would she ‘be roasted in its belly’ due to the hot Greek sun, they mused, but eaten alive by vultures and, crucially, ‘entirely unable to destroy herself’.