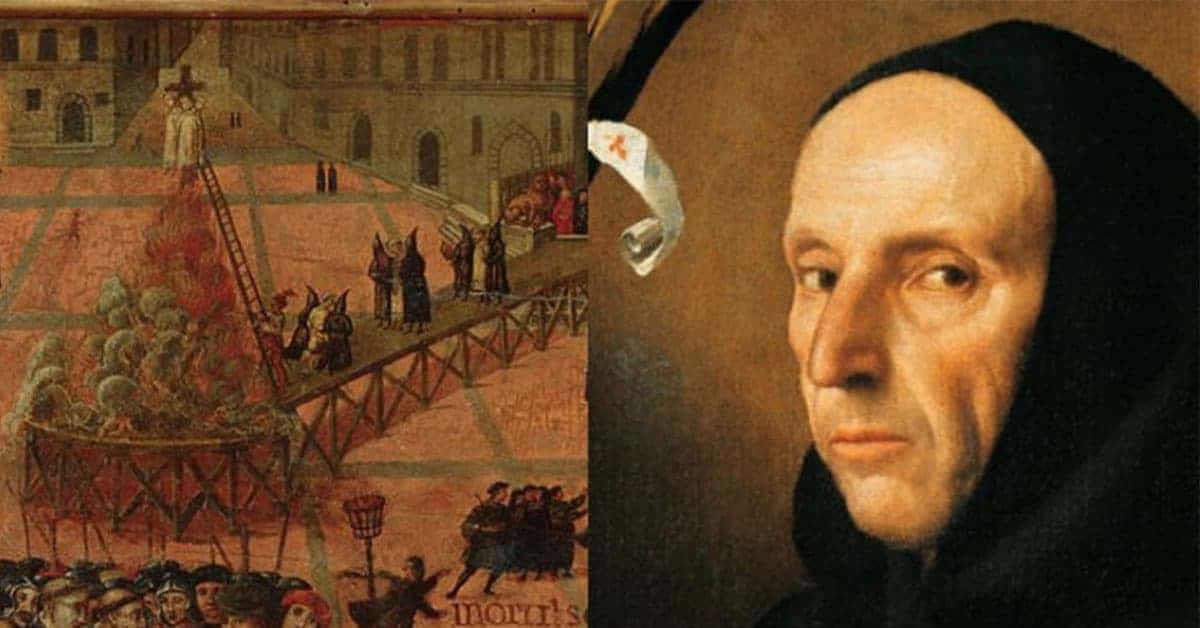 Visit Florence today, and you’ll see a city of extraordinary beauty, breathtaking architecture and unrivaled artistic heritage. But for all its charm, Florence can be deceptive. For its beauty masks a violent, feuding past. History Collection recently published an article about one chapter in Florence’s long and bloody history: the Pazzi Conspiracy. But it was by no means the only one. Just as (if not more) famous is the story of Girolamo Savonarola: a religious fanatic who tried to impose “God’s will” on the city of Florence, but ended up paying with his life.

Girolamo Savonarola was born in Ferrara in 1452. He was educated by his grandfather, a physician to the Duke of Ferrara, but grew up to reject the social, materialistic life he led: devoting his time instead to reading the scriptures, sleeping on straw mattresses, and avoiding women and wine at all costs. Aged 23, Savonarola fled from his family to a Dominican monastery in Bologna, which he used as a base to preach all around Italy, before finally settling at the monastery of San Marco in Florence in 1489.

There he began to deliver apocalyptic, impassioned sermons about the city’s imminent demise at the hands of a foreign king and going on moralizing tirades about how the city was becoming sinfully decadent; ruined by the riches of the Medici Family. Throughout the early 1490s, Lorenzo de Medici, the head of the Medici Family and de facto ruler of the Florentine Republic, had tolerated his subversive speeches. But in 1492 Lorenzo died, leaving a successor who had neither the political tact nor the popularity to keep the family in power.

Savonarola first came to public prominence just as the Medici lost their grip on the city. The new head of the family, Piero de’ Medici, had just been forced into exile at the end of November 1494, banished by a Florentine populace he could no longer afford to bribe. The Medici’s pre-eminence in Florence, as politicians, patrons of the arts, and public benefactors, meant there was a large vacuum to be filled.

Into this vacuum stepped Savonarola. In 1494 the French-Italian War broke out, with the French king Charles VIII laying claim to the crown of Naples. The French made their way south through Tuscany, capturing Pisa: a city formerly under Florence’s control. Wishing to recover Pisa while also remaining neutral, Florence’s governing assembly (the Signoria) sent Savonarola as part of an embassy to petition the king. It was to be his perfect opportunity; the French king, Charles VIII, represented the same foreign king Savonarola had been prophesying would come to destroy the city. Savonarola would make sure he let Charles know about this… at least in part.

To say Savonarola made a strong impression would be an understatement. Standing before the king and his court, he launched into a messianic tirade. God, he revealed, spoke through him and had told him that Charles VIII was his mortal instrument, sent to punish the corrupt Florentine Republic. God had also told him, however, that Charles should in no way attempt to destroy Florence. Doing so would greatly displease God, and though Charles might be his instrument, this didn’t make him immune to unspeakable revenge.

Threatening the King of France could have gone horribly wrong for Savonarola. But to the pious French king, the humbly dressed, sandalled Savonarola struck a saintly figure. Charles agreed not to invade—saving Florence from inevitable looting, sacking, and the indiscriminate massacring of its populace—but would instead peacefully occupy the city. Whether Savonarola had spoken out of political savvy or genuine, religious conviction, Florence had him to thank. The great irony is that Savonarola inadvertently saved a large number of the treasures he would later go on to destroy.

Charles VIII and his 20,000-man army entered Florence towards the end of November 1494. He stayed for just 11 days, as long as was necessary to impose humiliating terms on the city—including a fee of 150,000 florins for the French army’s upkeep, access to Tuscany’s fortresses, and confirmation that Pisa now belonged to France—before leaving to a collective sigh of relief from Florence’s population.

While Charles’s occupation of the city cost little in terms of life or material, it struck a mortal blow to Florence’s political prestige. The Signoria had shown itself incapable of effectively governing (and indeed protecting) the city. And where the government failed, people turned to God. Savonarola’s sermons, shouted from the pulpit of Florence’s Duomo, were attended by up to 14,000 people; the city’s populace spilling out the Cathedral doors so that, even if they couldn’t see the crucifix-wielding cleric, they could at least hear his message.

His message was clear: the Medici had failed, along with all their empty, godless materialism they had poured into the city. He wanted to make Florence the “City of God”, the city at the center of Italy’s much-needed purification. The only path to righteousness, he preached, was the rejection of material wealth. Let the rich give to the poor, let the churches be stripped of their excessive wealth and let all live in strict observation of God’s laws. This message was put into practice towards the beginning of Lent 1497 with an event known as the “Bonfire of the Vanities.”

Savonarola sent his “bands of innocents” (groups of children clad in white) around the city with posses of armed guards. They had been ordered to gather every valuable item they could find and bring them to the Piazza Della Signoria. These valuables were thrown onto an enormous pyramid and burnt: Wigs, clothes, perfumes, ancient pagan texts, paintings, statues, and busts, all piled beneath an effigy of Satan. It was a joyous moment for Savonarola. But little could he have known that the piazza would soon be the site of another public burning: one in which he would play a much more central part.

The Demise of Savonarola

Though Savonarola may have been the de facto ruler of the city, his position was never secure. He had alienated Pope Alexander VI by refusing to join other Italian states in rebellion against Charles VIII (whom Savonarola still regarded an instrument of God) after the French king finally took Naples. True, Savonarola may have won over vast swathes of Florence’s population, including artists such as Botticelli and even the ageing Michelangelo. But the man at the head of the “City of God” also faced opposition from commoners, nobles, and rival religious sects.

In late May 1498, there was a farcical episode in which a group of Franciscan friars, fiercely loyal to the pope, challenged Savonarola to prove his divine favor by walking on fire. If he emerged unscathed from the ordeal, he could continue to rule the city. The Franciscans even put forward one of their own, particularly radical friars to challenge him (though Savonarola refused to take up the challenge, instead of leaving it to his fervent disciple Domenico da Pescia). On the appointed day, however, as crowds gathered from across the city to witness this bizarre, archaic spectacle, the heavens opened, and in the lashing rain the event was called off.