The Man Behind The Mask: Guy Fawkes, The Gunpowder Plot and the Mask that Sparked Revolutions 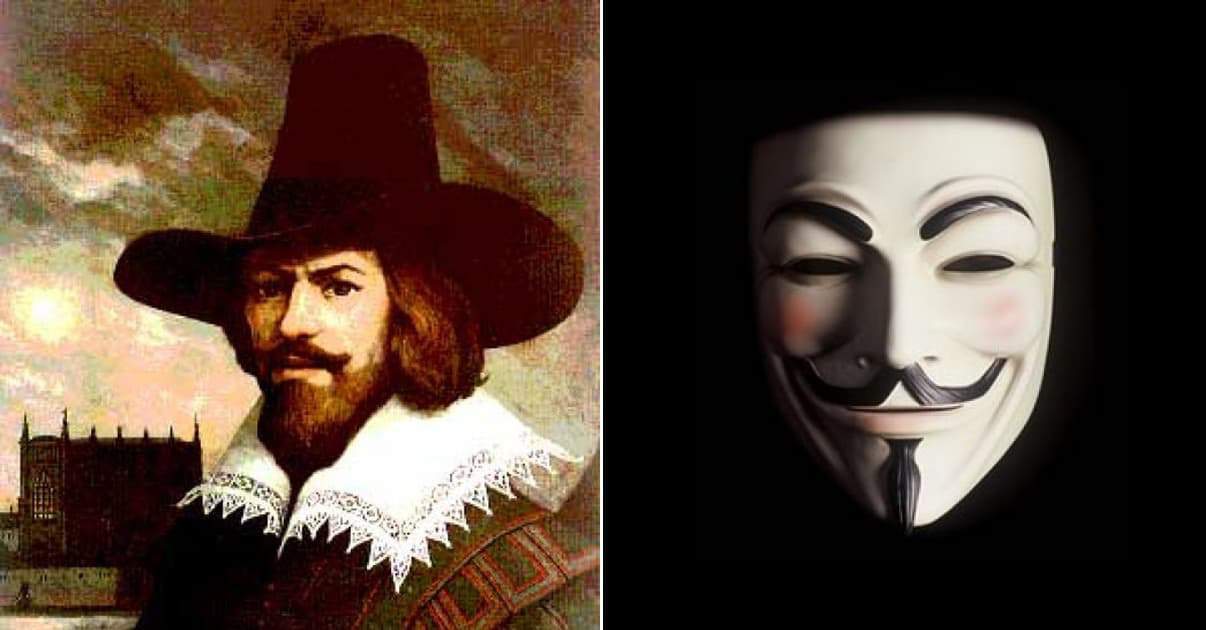 The Man Behind The Mask: Guy Fawkes, The Gunpowder Plot and the Mask that Sparked Revolutions

You have probably seen the mask worn by protestors at G7/G8 summit meetings, or worn by members of the hacker group Anonymous, but you may not know too much about the man that the mask represents. His name was Guy Fawkes, and along with his co-conspirators, he plotted to assassinate King James I of England by blowing up the Houses of Parliament in 1605.

The second half of the 16th century was a time of increasing religious persecution of Catholics in England. Following Queen Elizabeth I‘s accession to the throne in 1558 and the passage of the Act of Uniformity the following year, all British citizens, regardless of faith had to adhere to Protestantism. Catholics were required to attend Protestant services or face fines – 12 pence in 1559 but by 1581, fines had risen to £20, which was a colossal figure at the time. Catholics who refused to attend Protestant services were known as recusants (Latin for protest). Catholic religious practices, such as marriages and baptisms were forbidden and Catholic children had to be educated in Protestant faith schools.

Pope Pius V believed that the true queen of England was Mary Queen of Scots. In 1570, Pope Pius V issued a papal bull “Regnans in Excelsis,” which excommunicated Queen Elizabeth and absolved all British Catholics from allegiance to her. This action heightened fears of a Catholic revolt. Also, Jesuits priests who had studied in seminaries in Europe and who had returned to England to try and keep the Catholic faith alive were seen as a threat to the Protestant hierarchy.

In 1581, a law was introduced which made the withdrawal of English subjects from allegiance to the Queen or the Church, treason. In 1585 a law banning Jesuit priests from entering England was brought in. However, many Jesuit priests were smuggled into the country and continued to teach the Catholic faith, but when caught, were routinely executed for treason.

It was into this world that Guy Fawkes was born in 1570. His grandparents were recusant Catholics and following the death of his father, his mother married a Catholic man, Dionis Baynbrigge. At the age of 23, Fawkes left England to fight for Catholic Spain against Protestant Netherlands in the Eighty Years War. Within three years Fawkes, who had begun using the name Guido, had risen to a position of command and was held in high regard.

Following Queen Elizabeth’s death in 1603, Fawkes had hoped to persuade Spain to install a Catholic monarch on the British throne. But the Spanish were unwilling as they were still damaged by the devastating defeat of their Armada in 1588. Catholics hoped that persecution against them, which had increased under Queen Elizabeth I‘s reign would now decrease following the appointment of King James I to the British throne. King James I wife, Ann of Denmark, was Catholic. And for a brief time, it looked like their hopes might become a reality. The state ceased collecting recusancy fines and Catholics were no longer obliged to attend Protestant services.

Guy Fawkes and the Gunpowder Plot

However, this era of tolerance was short-lived. In a speech to parliament in early 1604, King James VI announced his utter detestation for the papist religion. Three days later, he ordered all Jesuits and Catholic priests out of the realm and recusancy fines were reintroduced. It became clear to Catholics, that in order for change to be brought about, then action would have to be taken. Despite his association with the Gunpowder plot, Fawkes was not the mastermind behind it. Instead, it was Robert Catesby, a very charismatic and influential figure who was also a devout Catholic.

Catesby enlisted four others, his cousin, Thomas Wintour, along with Thomas Percy, and Christopher and John Wright. Fawkes first became aware of the plot when he met with Wintour in Brussels, and in May 1604, Catesby outlined his plan to the others of his intention to assassinate King James I by blowing up the Houses of Parliament during the state opening of parliament. As well as the king, the opening of parliament was due to be attended by 69 very senior men, including twelve senior judges and their legal attendants, the majority of the bishops of the Church of England, the members of the privy council, and the majority of the English aristocracy. It was a daring plot that potentially would have enormous political ramifications were the conspirators able to successfully execute their plan.

In the run-up, a lease on a house adjacent to the House of Lords had become vacant and Thomas Percy, who had been recently appointed to the King’s bodyguards, took up the lease on the house. Guy Fawkes took up residency using the fake name John Johnson, claiming to be Percy’s servant. As Fawkes had been out of the country for over ten years, he was effectively a stranger and could freely walk around unnoticed.

The plotters had been working to a deadline of February 1605, which was when the state opening of parliament was due to take place. However, due to an outbreak of plague in England, the opening of parliament was postponed for eight months until October, before it was delayed again until November 5. Although the plotters had to postpone their plans, the delay gave them more time to put the necessary steps in place to carry out their attack.

Catesby had lodgings in Lambeth, directly across the river from the Houses of Parliament. The barrels of gunpowder to be used in the attack were stored there. An opportunity arose which allowed the conspirators to get even closer to their target. A coal merchant had moved out of a vault directly under the House of Lords, and Percy takes up the lease. Percy’s cover story is that his wife is about to join him in London and he would, therefore, need extra storage space.

From Catesby’s house, the barrels of gunpowder are transported in a boat across the River Thames to the vault. At the time, the Thames would have been bustling with trade and traffic, so one more small boat crossing it would have been inconspicuous. By July 1605, a total of 36 barrels of gunpowder were now in the vault concealed under a large bundle of firewood directly underneath where King James would be seated in the House of Lords.

As the deadline nears, more people are gaining knowledge of the plot and some are joining forces with Catesby and Fawkes. In the summer of 1605, Catesby shares the details of the plot with his friend and spiritual guide, a Jesuit priest called Fr. Oswald Tesimond. Tesimond then relays this information to Fr. Henry Garnett, thus implicating them both in the treasonous conspiracy. Also, Catesby’s cousin, Francis Tresham becomes the thirteenth member of the conspiracy.

On October 26, 1605, a letter is delivered by a stranger to Tresham’s brother-in-law, Lord Monteagle. The letter is anonymous and cryptic, but it conveys a warning to Monteagle to stay away from parliament at the state opening. Monteagle takes the letter to the Secretary of State, and the king’s chief spymaster, Robert Cecil who in turn informs the king. Although the details of the plot are not clear from the letter, King James discovers that Percy had leased the vault, and after a second search, his guards find Fawkes there. He is promptly arrested but under interrogation remains silent.

Although torture was illegal in England, its use was permitted under exceptional circumstances, such as conspiracy to commit treason. King James writes a letter authorizing the use of torture against Fawkes. It states, “If he will not otherwise confess, the gentler tortures are to be first used unto him and so by degrees until the ultimate… and so God speed you’re good work.” All the evidence suggests that Fawkes was tortured on the rack in the Tower of London. Fawkes eventually broke and revealed his true identity. Two days later he revealed the names of his accomplices and the details of the gunpowder plot. Fawkes scribbled signature following his torture indicate that he was a broken man at this point.

All the while, Catesby is trying to secure support for a larger rebellion. On the evening of November 5, 1605, Catesby and his men address a large gathering of Catholics. Catesby informs them of the plot to kill King James I and their aspirations to replace him with a Catholic monarch, namely the king’s daughter, Princess Elizabeth. Catesby fails to win the support of the Catholics in attendance, who want no part in a treasonous rebellion. Princess Elizabeth later said that she would “rather have died with her father in parliament than wear the crown on such condition.”

Catesby then travels to the Midlands to try and garner support from Catholics there but to no avail. On November 6, 1605, Fr. Henry Garnett and his fellow priests were anxiously awaiting news of the outcome of the plot when Catesby’s servant rode into the courtyard with a letter from Catesby, revealing that the plot had failed. When Catesby desperately tries to persuade Fr. Garnett to raise a Catholic rebellion, Garnett replies, “we are all utterly undone.”

Catesby and his men then seek refuge in Holbeach House but a day later are surrounded by the sheriff and two hundred men. Catesby and Thomas Percy are both shot and killed while Tom Wintour is shot in the shoulder while crossing the courtyard. Over the next few weeks, all of the men involved in the conspiracy are rounded up and taken to the Tower of London to be interrogated under torture. All are tried at Westminster Hall and convicted of high treason and sentenced to be hung, drawn and quartered.

Jesuit priests are also accused of being directly involved in the conspiracy. Fr. Tesimond manages to escape to Rome and lived for a further 30 years but Fr. Henry Garnett was not so fortunate. In May 1606, he is tried for high treason before being hung, drawn and quartered. Fawkes is sentenced to the same fate. He is to be disemboweled, his genitals are to be cut off before he is to be hung, drawn and quartered. It is widely believed that Fawkes lept to his death which spared him the excruciating death which he was facing. An effigy of Fawkes is still burned on November 5 in England every year. The Guy Fawkes mask has become a symbol of protest and is widely worn by those protesting against perceived injustices.