One of History's Greatest Minds, Hypatia, was Brutally Disposed of for being a Woman with too Much Power 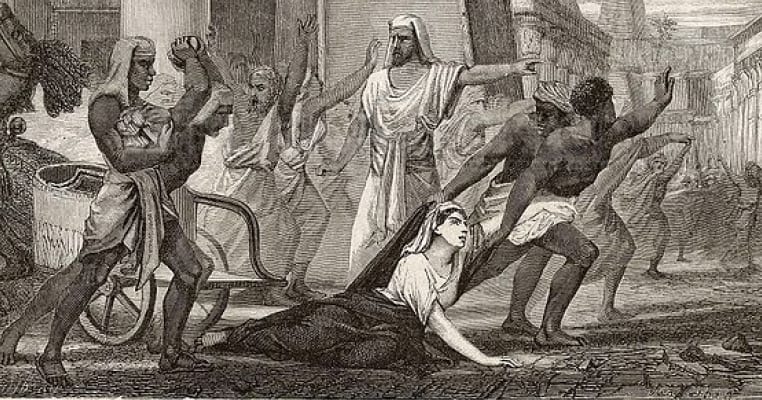 One of History’s Greatest Minds, Hypatia, was Brutally Disposed of for being a Woman with too Much Power

In 415 AD, a most remarkable woman was murdered in the Egyptian city of Alexandria. Hypatia of Alexandria was a mathematician and philosopher, who despite the prevailing biases against her sex was held in the highest esteem by the learned men of the ancient city. Students flocked to listen to Hypatia lecture and to receive her instruction. In fact, the ruling elite of Alexandria so respected Hypatia’s wisdom; she even had the ear of the Roman governor of Egypt.

Alexandria had long been a city of culture and learning. However, by the fifth century AD, it was, like so much of the Roman Empire, a city riven by division. For although Christianity was now the official religion of both the eastern and western Empires, paganism continued to persist. In Alexandria in particular, sporadic outbursts of violence broke out between the different religious factions as they vied for influence in the city. Hypatia’s death sparked just one of these spates of rioting when Alexandria’s Christians were blamed for her murder. Envy seems to have been the motive. But envy of what: her influence as a woman, her religion and learning? Or was Hypatia’s death the result of something else entirely?

The exact date of Hypatia’s birth is not known. However, sources state she was ‘in her prime’ i.e., a fully matured adult, sometime between 395-408 AD, during the reign of the Emperor Arcadius. This description suggests that Hypatia was probably middle aged – even elderly at the time of her death. She may have been a prodigy. However, no young woman, however much a genius could have hoped to achieve the influence Hypatia is reputed to have enjoyed. Instead, it probably took Hypatia years to establish her exulted reputation- possibly longer than most men.

Her father, Theon of Alexandria, a respected philosopher and geometrician who was also the head of the University of Alexandria educated Hypatia. Hypatia’s thirst for learning proved insatiable, and she soon surpassed her father’s teachings. She began to study independently and theorize on other philosopher’s works. Although her writings are now lost, Hypatia is known to have written commentaries on Diophantus, the “father of algebra,” the works of the astronomer Kanon and the Conic Sections of Apollonius of Perga.

The sixth-century pagan writer Damascius claimed that Hypatia was the wife of the philosopher Isidorus- an impossibility since Isidorus was born long after Hypatia’s death. However, most sources agree that Hypatia remained single- and chaste. Many of the sources make a great deal of Hypatia’s physical beauty. However, for Hypatia at least, beauty had nothing to do with the flesh. One story tells how when one of her pupils fell in love with her, Hypatia suggested he might take his mind off his feelings by applying himself to his studies. When this did not work, however, Hypatia resorted to extreme measures.

Hypatia threw some of her stained ‘woman’s rags, ” at her young suitor to illustrate her imperfect nature. “This is what you are in love with, young man,” Hypatia told him as she threw the blood-stained cloth at him, “and not with the Beautiful.” To Hypatia, her female body was an irrelevance-perhaps even an inconvenience. Indeed, the sources describe how she put on “a man’s cloak”- in other words aped a male style of dress. By doing so, Hypatia was downplaying her sex, de-sexing herself even, so that she might be taken seriously as a scholar.

Acceptance as an intellectual was not something Hypatia could hope for if she conformed to the social norms for the women of her time. For women in the eastern empire,whether pagan or Christian, were supposed to take a secluded and subordinate role. They were certainly not supposed to give public lectures in the center of Alexandria on Plato and Aristotle. Hypatia transcended expectations of her sex and was not only tolerated but lauded. Her originality of mind led to her being described as surpassing “by far the philosophers of her time.” She was also a popular teacher with “people from all over who wanted to study philosophy” rushing “to her side.” So well-respected were Hypatia’s opinions that even the magistrates of Alexandria consulted her. Hypatia was an influential woman on many different levels. And that made her dangerous.

The Murder of Hypatia

There are several versions of the murder of Hypatia. The fullest and the one closest to events it describes is that of the Christian writer Socrates of Constantinople. Socrates wrote his account of Hypatia’s death some twenty-five years after the event as part of his Ecclesiastical History. In it, he describes how the root cause of Hypatia’s killing lay in her relationship with Orestes, the Roman governor of Egypt. Orestes was relying upon Hypatia more and more for advice- and certain members of the Christian community did not like it.

Orestes, who was a pagan, was involved in a bitter dispute with Cyril, the Bishop of Alexandria. The Christians believed that if Cyril and Orestes reconciled, they would enjoy more influence in Alexandrian life. The trouble was, the pair remained bitterly divided-and the Christian’s believed Hypatia was responsible for the continuation of that divide. So a plot was hatched to kill her.

Socrates’ account suggests that a man named Peter the Reader was the instigator. In March 415 AD, Peter and a group of his followers accosted Hypatia as she returned home. They dragged her from her carriage and took her the Caesarion; a former ancient temple built by Cleopatra, which Alexandra’s Christians had turned, into their principal church. There, they “tore off her clothing and killed her with potsherds.” The murders then tore Hypatia’s body ‘limb by limb” and either took her remains to a place in Alexandria known as Cinaron where they were burnt or else scattered them about the city.

Other accounts of Hypatia’s death, while agreeing with Socrates on the particular’s of the murder itself, disagree slightly on the instigators- and the motives. Damascius, a sixth-century pagan writer who recalls Hypatia’s death in his Life of Isidorus placed the blame for Hypatia’s demise squarely at Bishop Cyril’s door. Damascius describes how Cyril happened to be passing Hypatia’s house one day when he noticed a great crowd of people outside it. Some were leaving, while the rest were waiting for admittance. Cyril asked what all the hubbub was about and was told that the philosopher Hypatia was giving a lecture. Cyril was so upset by this visible display of Hypatia’s influence that he hurried away to plan her murder.

John of Nikiu, an Egyptian Coptic bishop writing in the seventh century AD gives a different slant to events. In his version, Hypatia is killed because she was a witch who was a danger to the city. Her science becomes magic as John describes her as“devoted at all times to magic, astrolabes, and instruments of music,” with which she “beguiled many people through Satanic wiles.” Orestes was just one person who “honored her exceedingly; for she had beguiled him through her magic.” John describes how Orestes stopped attending church and began to return to pagan ways. So according to John of Niku, by committing murder, Peter the Reader and his followers were saving Orestes- and the people of Alexandria from Hypatia’s her evil ways.

Pagan Martyr or a Victim of Circumstance.

John of Nikiu’s notion of Hypatia’s murder as an execution for witchcraft can be immediately discounted. The Coptic Bishop was writing over two hundred years after the event, and his view was colored by his preoccupations. Damascius is equally biased. As a pagan, he was too eager to discredit the established church by laying the blame for Hypatia’s death with Bishop Cyril rather than a gang of rogue Christian zealots. Both sources, however, agree on the critical elements of the murder, which they acquired from Socrates of Constantinople. Socrates’s account is, therefore, the best place to start looking for a motive for the killing.

Socrates’s states envy was the primary motive behind Hypatia’s death; specifically Christian jealousy of the influence she had over the Roman governor. In the early fifth century, Christianity was still very much in its infancy as a socially established religion. Many of its leading lights were men from modest backgrounds who had not benefitted from the classical education of the still predominantly pagan elite. This contrast between pagan and Christian intellectualism was even starker in Alexandria, home of the famous Great Library and long-established seat of learning.

So, Christians eager to acquire more influence could be forgiven from having a slight inferiority complex- and for feeling resentful of people like Hypatia who were better equipped to speak the established language of power. According to Socrates, Christian’s deemed Hypatia a danger because of “what she knew about astronomy“- a specific reference to her classical pagan education. If envy of Hypatia’s learning was the motive for her murder, then she can be seen as a pagan martyr; albeit in an intellectual rather than strictly religious sense.

Hypatia’s sex might have strengthened Christian resentment for it must have been doubly irksome to see a pagan and a woman depriving Christian men of influence. Misogyny, however, is not the whole story. Late fourth and early fifth century Alexandria was a hotbed of tension. The city became famous for its sporadic violent riots as Christian’s intermittently struck out at anything that threatened their religious and political supremacy. In 386AD, a Christian mob destroyed the ancient temple to the god Serapis, the Serapaeum. The University of Alexandria and the famous library quickly followed. Bishop Cyril even led Christian mobs which drove the Jews out of Alexandria- and looted their synagogues.

However, the key to power in Alexandria was to control the governor. Perhaps Hypatia’s death was a message to Orestes: if we can kill your closest adviser- you could be next. This made Hypatia a pawn in a larger game rather than the primary target. If this was the case, it was a game Cyril ultimately won. For although outraged riots broke out after Hypatia’s death, her murder also convinced pagan intellectuals they were no longer safe in Alexandria. Most fled to the relative safety of Athens. As for Orestes, he almost immediately converted to Christianity. Seen in this light, Hypatia’s death was not an end in itself but one part of a grand plan to turn Alexandria from a pagan seat of learning into a wholly Christian city.