15 of the World's Largest and Most Intense Empires 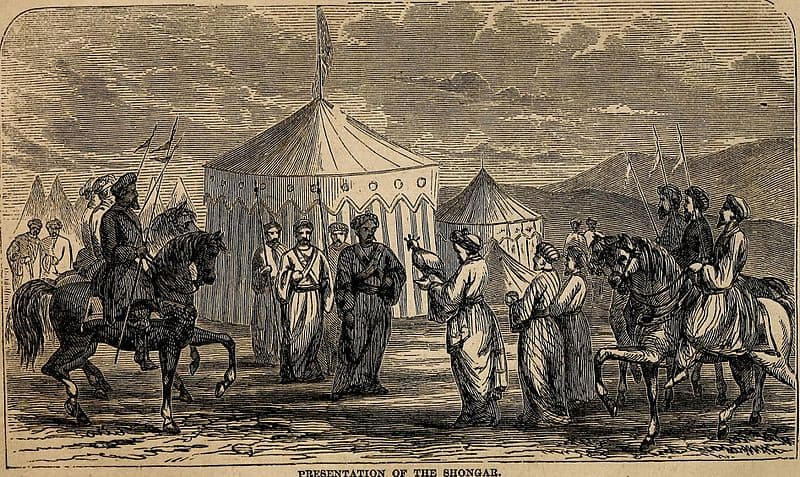 15 of the World’s Largest and Most Intense Empires

10. The Empire of Japan had a meteoric existence

When American Commodore Matthew Perry first demanded Japan open its ports to Western trade, he encountered a nation still engulfed in feudal practices. A little over a decade later Japan entered a period known as the Meiji Restoration. Beginning in 1868, Japan entered a time of industrial development and growth unmatched by any other nation in history. By 1900, the Japanese had a world-class modern navy, a powerful army, and a strong and flexible industrial base. Nationalism and militarism ensued. The Empire of Japan took its place on the world’s stage, defeating the Tsarist Russians in the Russo-Japanese War, and fighting on the side of the Allies in World War I.

In the 1920s and 1930s Japan’s military strength continued to expand, watched with growing concern by the United States Navy, its principal rival in the Pacific. The Empire expanded as well. When the Second Sino-Japanese War began, the United States used diplomatic and trade pressures to try to convince Japan to cease its aggression. Finally, in December, 1941, Japan attacked the United States Fleet at Pearl Harbor, and then ran riot across the Pacific. They seized the Dutch East Indies, the Philippines, Singapore, Hong Kong, Wake Island, Guam, and more. By mid-1942 the Empire of Japan achieved its peak in size, military power, and wealth.

Three years of hard fighting reduced them to occupying islands and fortresses they could no longer defend or resupply. Their fleet and air forces were all but destroyed. Their home islands were bombarded by ships and aircraft. After the surrender in 1945, American troops occupied the home islands, enforcing martial law, while a new constitution creating a democratic government came into being. The new constitution restricted the Japanese military to defense forces. Today, the Japanese Naval Defense Force is the fourth largest Navy in the world, based on tonnage afloat. The Empire of Japan officially dissolved in 1947, though its Showa Emperor, Hirohito, remained as a figurehead only.

11. The Inca built a vast empire without knowledge of the wheel or iron

The largest of the native empires in the Americas before the arrival of the Europeans, the Inca were in many ways baffling. They built massive architecture, including the famed Machu Picchu, though they lacked iron for cutting and shaping stones. They built an intricate system of roads, though they did not use draft animals, nor possess the wheel to facilitate movement and travel. Records were kept through a system of stringed knots, in lieu of a written alphabet. They were tolerant of religious beliefs of the various tribes absorbed into their empire, through conquest or alliance. The empire, which centered in the Peruvian Andes at its beginning, lasted an estimated two and a half centuries.

Exchanges of goods and labor substituted for hard currency, even in the paying of tribute and taxes. The size of the empire and the varying tribes subdued led to a polyglot of languages spoken throughout the Incan lands. At its height, at the time of the arrival of the Conquistadores, the Incan Empire ran down nearly the entire west coast of South America. Its capital, Cusco, contained numerous buildings constructed of huge stones. How they were quarried, transported, and erected remain mysteries to archaeologists and historical scholars. The Spanish arrived in Inca territory in 1526, Conquistadores led by Francisco Pizzaro.

They found the Inca armed with weapons of wood, stone, and bronze. Another weapon wielded by the Inca was the lasso. The Spanish delivered an ultimatum; conversion to Christianity or war, the Inca chose the latter. Their last stronghold in the formerly vast empire fell to Spain in 1572. The destruction of the Inca Empire, greatly facilitated by the spread of smallpox and other diseases to which they had no immunity, kept many of their secrets from history. Among them were their highly productive farming methods, their construction techniques, and the engineering techniques building their road systems.

12. Trade rather than conquest built the Dutch Colonial Empire

Although there were some exceptions (America’s New Amsterdam comes to mind) the global Dutch Colonial Empire was built to facilitate trade with other nations, rather than to establish permanent settlement colonies. Dutch colonies usually consisted of a fort and trading post, a small garrison, and the business facilities of the traders. Shipbuilding and rigging facilities, and wharves and warehouses, added to the brisk appearance of Dutch ports. Beginning in the 16th century, the colonies were established and administered by the Dutch East Indies and Dutch West Indies Companies, which competed against similar organizations in Britain and France. Colonies were, in essence, company towns.

The commerce minded Dutch were more interested in trade than in establishing hegemony over the indigenous people of other lands. This model continued through and after the Napoleonic Wars, though by then controlled by the Dutch Government rather than the commercial companies. During the late 18th century, the British seized many of the overseas Dutch posts, especially when the Dutch provided support for the rebellious colonists during the American Revolution. Still, throughout the 19th and 20th century, Dutch posts in the Southwest Pacific and in the Caribbean traded in pepper, tea, molasses, sugarcane, silks, spices, and other goods.

By the time of the Second World War, the Netherlands East Indies in the Pacific produced some of the finest oil in the world, as well as latex, making them prime targets for the Japanese. Japanese occupation during the war led to an Indonesian independence movement in its aftermath. The Dutch attempted to retain control of the economically valuable colony. A guerilla war erupted, and Dutch officials bowed to international pressure and recognized Indonesian Independence in 1949. Six islands in the Caribbean, including Aruba and Sint Maarten, are today considered part of the Netherlands, though no longer in a colonial status.

13. The First and Second Mexican Empires

After leading the revolution against Spain in 1821 and gaining Mexico’s independence, Agustin de Iturbide rallied popular support for a constitutional monarchy as the new form of government. In May, 1822, he used demonstrations to elevate himself to the title of Emperor of Mexico. The lands he ruled included modern-day Mexico, and most of the Southwest United States from Texas to California, as far north as today’s southern border of Oregon. Iturbide summoned the Mexican Congress, had himself elected as Emperor, dissolved the Congress and ruled by Imperial decree. The next year, having lost the support of the army and the people, largely due to a corrupt bureaucracy and a bankrupt treasury, he reconvened Congress and offered his abdication. Congress accepted, and Mexico became a republic.

In 1863, French Emperor Napoleon III intervened in Mexico, allied with Mexican conservatives, to create the Second Mexican Empire. In terms of land area, the Second Empire was much smaller than its predecessor, with the United States having control of the former Mexican territories north of the Rio Grande, and all of California above the Baja Peninsula. Napoleon installed Austrian Archduke Ferdinand Maximilian of the House of Habsburg as Emperor of Mexico. Maximilian had the support of the Mexican Conservatives and upper classes, but not of the people. French troops occupied Mexico to protect French interests. The United States, embroiled in the Civil War, could do little to oppose the French violation of the longstanding Monroe Doctrine.

In the end, Mexican nationalists defeated the French troops, and the end of the Civil War brought American support of Mexican revolutionaries. Napoleon withdrew his troops beginning in 1866, offering Maximilian safe passage. Maximilian chose to remain and fight for his throne, by then seen as illegitimate even by many conservatives. He sent his wife, Empress Charlotte, to Europe to persuade Napoleon to continue his support. Political pressure from the United States, and an American naval blockade of Mexican ports, forced the French emperor to demur. Maximilian, betrayed by a cabal of his own generals, was captured, tried for treason, and executed by firing squad in June, 1867. With its emperor died the Second Mexican Empire.

14. The Catholic Church created the Holy Roman Empire as an extension of the defunct Roman Empire

On Christmas Day, 800 CE, Pope Leo III bestowed upon Charlemagne, King of the Franks, the title of Emperor, its first appearance in Western Europe since the dissolution of the Western Roman Empire. The newly created Holy Roman Empire extended, by divine right of kings, to the legitimate emperors of Rome, according to its adherents. The individual bearing the title of Holy Roman Emperor became the “king of kings” among Europe’s monarchs, with supreme authority over disputes among the Catholic rulers, answerable directly to the Pope. At least, in theory. The title remained with Charlemagne’s heirs until the late ninth century, when a series of religious wars led to it being held by Italian royal houses.

The intent of the throne was a unification of the Germanic and Italian kingdoms, duchies, principalities, electorates, and other dynastic states into a system more reflective of those of Western Europe. By the time of the Reformation, the throne of the Holy Roman Emperor was filled by the concurrence of a majority of the various rulers of the numerous states. Political compromises and resistance of the states over which the Emperor held authority limited his power. So did the waning influence of the papacy on Europe’s political affairs. By the mid-16th century the Holy Roman Emperor no longer received his crown from the hand of the pope.

15. The Mughal Empire created living standards in India which exceeded those of Europe

Created via military conquest for the most part, the Mughal Empire on the Indian Subcontinent ruled over numerous cultures and religions with relative tolerance. It lasted over three centuries, though in the final century of its existence the British Raj curtailed it significantly. The Empire gained massive wealth through taxes, primarily on agriculture. It coined a stable and regulated currency, using bullion imported in exchange for agricultural products, raw materials, manufactures, and textiles. By the early 18th century, the standards of living in Mughal exceeded that of Great Britain, which exceeded that of the rest of Europe. Nor were most laborers looked down upon, as usually occurred in Britain and elsewhere.

Militarily the Mughal made advances in the use of gunpowder based weapons, including rockets. Shipbuilding became a major industry, Indian shipyards built vessels for their European trading partners. Cotton became an important cash crop, and finished cotton piece goods evolved into one of India’s largest exports under the Mughal. European demand for Mughal products created a trade imbalance, forcing the Europeans, particularly the Dutch, British, and Spanish, to make up the difference in gold bullion. Gradually, European occupation of and control of Mughal lands led to the decline of the empire, as the companies controlled production and prices based on their needs and profit lines.

The heyday of the Mughal Empire came to an end before the establishment of the British Raj, from internal pressures, warfare, and gradually declining administration. Though vestiges of it remained in British India, by the end of the 18th century the East India Company controlled most of what remained. Standards of living for the natives dropped as the British Empire absorbed the Mughal Empire, though India’s great wealth remained, transferred into British pockets. Today, the advances of India under the Mughal emperors can be seen throughout India in art and architecture. Among its many achievements is the Taj Mahal in Agra, numerous temples and mosques, and the veritable symbol of Indian music, the sitar.

“Who were the Mongols?” Erin Blakemore, National Geographic. June 21, 2019

“Napoleon Bonaparte and the Legacy of the French Revolution”. Martyn Lyons. 1994

“Maximilian, Mexico, and the Invention of Empire”. Kristine Ibsen. 2010