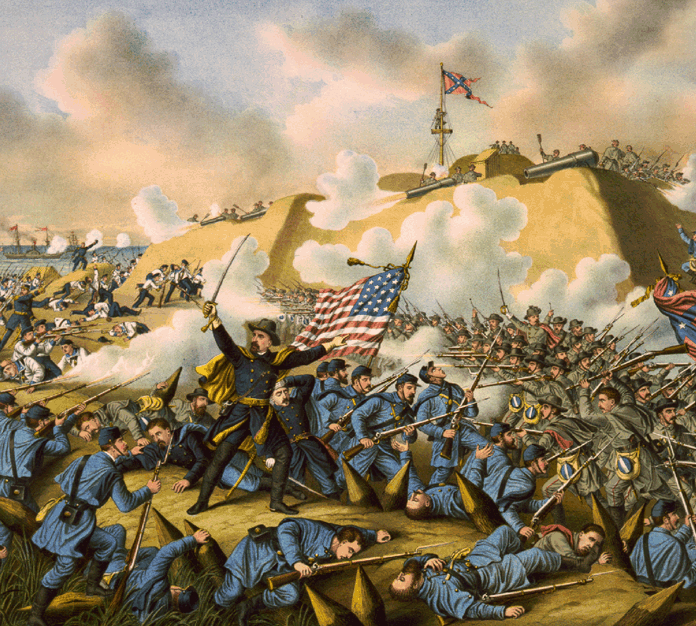 Neither England nor France officially recognized the Confederate States of America during the Civil War. But they needed Confederate produce. The mills of England in particular needed cotton from Southern plantations. The South needed arms from European manufacturers. A brisk trade between the Southern states and Europe, mostly through the British port of Liverpool, developed early in the war. To interdict it the United States Navy established a naval blockade of Southern ports, part of the Union’s Anaconda Plan to strangle the rebellion. Soon smaller, faster ships known as blockade runners challenged the US Navy on the seas, slipping in and out of ports delivering weapons to the Confederate Army, paid for with Southern cotton and tobacco.

Many of the blockade runners were built in British shipyards, safe from American ships, and sold to British or Southern owners. Nearly all of them were privately owned, though the Confederate government purchased some, commissioning them into the Confederate Navy. They also purchased commerce raiders built in Britain to prey on Union shipping. The United States Navy faced the enormous task of patrolling over 3,500 miles of coastline, while simultaneously patrolling the waters off the British Caribbean possessions and the approaches to Great Britain itself. Here is the story of the Confederate and British blockade runners of the American Civil War.

1. The Anaconda Plan was designed to slowly suffocate the Confederacy

General Winfield Scott devised the Anaconda Plan to isolate the Confederate States from international trade. It was based on the knowledge that the seceding states had little manufacturing industry and relied on agricultural products for trade. There was no arms industry to speak of besides the great Tredegar ironworks in Richmond. The South needed to acquire the machinery of war through trade, and shutting off that trade was key to its defeat, in Scott’s view. The blockade was the responsibility of the United States Navy, which was ill-prepared to enforce it in the early days of the war.

The United States had 42 ships in commission when President Lincoln proclaimed the blockade, with another 48 in ordinary. In ordinary meant the ship could be commissioned after a crew was made available. Only three ships were considered suitable for the duties required of them in a blockade. A massive naval expansion began in April, 1861 – before Virginia joined the secession. The states which had seceded had major ports at Wilmington, Charleston, Savannah, in Florida, and in the Gulf at Mobile, New Orleans, and in Texas at Galveston, among others. There were also more than 180 coastal towns where ships could be unloaded, though they lacked major port facilities, and nearly innumerable inlets and sheltered bays.