Today in History: Work Begins on the Suez Canal (1859) 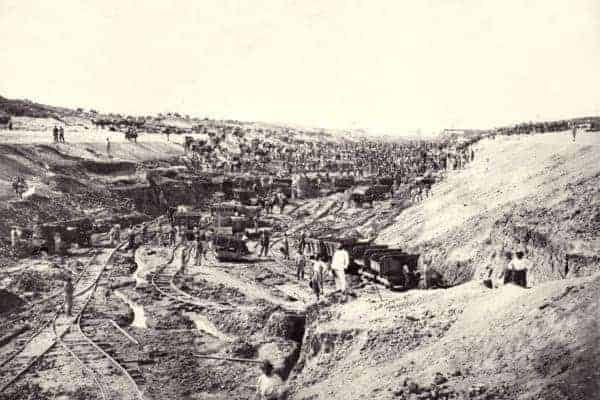 Today in History: Work Begins on the Suez Canal (1859)

For most of ‘modern’ human history, the primary means of transport has been water. It was only in the 1800s when rail travel became an option, and even then it wasn’t until later in that century that trains became prevalent enough and reliable enough to transport goods long distances. In the 1900s motorized vehicles, and later semi-trucks were introduced and became important means for commercial transport.

Even today, however, transport by ship is very important for the world economy. From an economic perspective, the shorter the distance your goods have to travel, the less it costs to ship something. Before the construction of the Suez Canal, which began construction on April 25, 1859, if a company or government wanted to ship something from the Mediterranean Sea to the Indian Ocean, vessels would have to sail around the continent of Africa in order to get there.

Throughout history, the isthmus of Suez has been a popular site for temporary waterways that were used to connect larger bodies of water. Even the ancient Egyptians created canals that connected lakes and rivers in this region. However, all of these waterways either eroded over time or were deconstructed for military and security purposes.

In the mid-1800s, Ferdinand de Lesseps organized a much larger undertaking. The Suez Canal would be the first permanent artificial canal in the region, allowing for a much shorter water-bound route between Europe and Asia.

The construction would take a decade, and a lot of the labor that went into the construction was done using forced labor. Once the initial work was done, European workers were brought in with steam shovels and dredgers to speed up the work.

The construction was marred by disease outbreaks, where many died from cholera, and several labor disputes.

On November 17, 1869, the canal officially opened. It was only 25 feet deep, and 72 feet wide at the bottom, while the surface was near 300 feet wide in places. It was fairly useless, therefore, for larger ships that required deeper, easily navigable, waterways. In 1876, the canal would undergo several major renovations, that would make it better suited for larger ships.

The canal itself has undergone several changes in ownership. Originally the French-founded Suez Canal Company was meant to stay in French hands for 99 years. However, in 1875, Great Britain bought stocks from the Ottoman governor of Egypt, giving it a majority in the company. In 1882, the UK invaded Egypt and held it until 1936. The rights to the canal, however, stuck with Great Britain even after Egyptian independence.

Egypt finally gained control over the Suez Canal in the 1950s. It has since been a hotbed for conflict between Egypt and other Middle Eastern countries. Despite this, the Suez Canal is one of the most traveled waterways in the world. On average, 50 ships go through the canal every day, and they carry an estimated 300 million tons of goods each year.

Imperial War Museum – Why Was the Suez Crisis So Important?