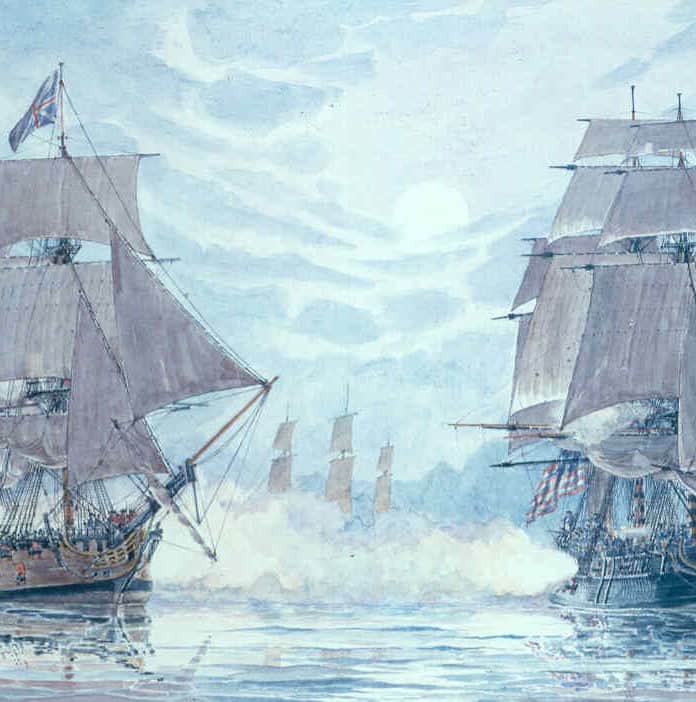 Great Britain, an island nation, depended on trade to feed its population and fuel its economy. Its colonial empire was built for that purpose. The British Army was too small to control the inhabitants of its colonies around the globe and it relied on locally raised armies, supported by the world’s largest and most powerful navy, to defend its holdings. It was such a tactic applied to suppress the American Revolution, British troops supported by locally raised troops – Loyalists – and hired mercenaries, with the Royal Navy controlling the East Coast of the United States.

The American patriots had no navy when the Revolutionary War began, and little prospects of creating one which could be effective against the British. The entire American coastline was exposed to the largest navy in the world. Yet in the naval war which was a major factor in the American’s independence, the Americans prevailed, both before and after the French intervened on their behalf. American raids on British shipping raised insurance rates in London to crippling highs. British ships were defeated by American upstarts in sight of British shores. Morale plummeted in England. Here is how Britain’s Royal Navy lost the American Revolutionary War.

When George Washington learned of the severity of the powder shortage facing the Continental Army in the summer of 1775, he sat stupefied, unable to speak for nearly thirty minutes. Eight ships of the newly created Continental Navy were dispatched, under Commodore Esek Hopkins, to raid British coastal installations, where naval supplies were stored, up and down the American coastline. Hopkins ordered his captains to rendezvous in the Bahamas, at Grand Abaco Island. In March 1776 the fleet landed in New Providence, with 200 newly created American Marines, and captured Nassau. Within the town were naval stores and cache of weapons and gunpowder.

The American ships returned to port at New London in early April, with badly needed supplies for the American cause. Hopkins was censured by the Continental Congress for his disobeying his orders and leading an assault in the Bahamas, as well as for problems with controlling the fleet, which was inexperienced and shorthanded. Nonetheless, the first serious naval raid of the war was a successful attack on British property carried out by the impudent Americans, leaving the vastly superior British navy embarrassed and humiliated.