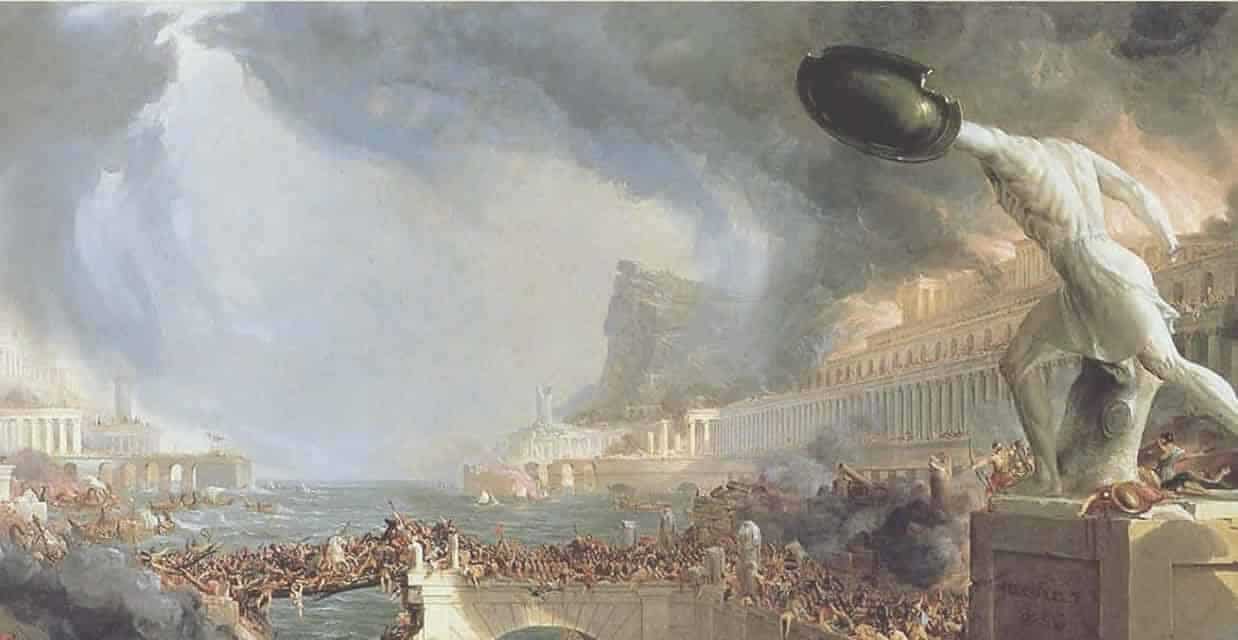 The Western Roman Empire’s army was once feared throughout the known world but its influence and quality waned in the latter part of its existence. One of its biggest failures at this time was neglecting to introduce conscription. Instead, the army became dependent on regimentation with a compulsion to remain in the profession of one’s father. By the fifth century, the practice of forcing the sons of soldiers to follow suit was obligatory. Alas, this resulted in a severe decline in the quantity and quality of the troops. These were not battle-hardened men or talented commanders. They were men thrust into positions they didn’t want, and the results became clear on the battlefield.

This scarcity of soldiers meant a reliance on barbarian mercenaries. It would have been problematic had these troops merely been of a lower rank, but in the fifth century, a significant number of generals were German; a situation that only exacerbated the problem. These soldiers had questionable loyalty, and they ultimately had far too great an influence on who became emperor. German Masters of Soldiers, such as Ricimer and Orestes, chose who ruled, so every emperor after Valentinian III was a â€˜lame duck.’

With so many enemies, the Western Empire had no chance of survival as it had such a dearth of quality within its ranks. The writing was on the wall by the beginning of the fifth century when Stilicho was unable to prevent the Suevi, Alans, and Vandals, from crossing the Rhine. These tribes destroyed and depopulated several cities and caused a number of the Western Empire’s subjects to switch sides. Those who immediately succeeded Alaric were happy to share in the relative prosperity of the empire but by 425, the northern frontier was weak, and there were five Germanic kingdoms in the Western Empire. Add in an increasingly Gothic army, and it was clear that the West was doomed.

Meanwhile, in the East, the empire was strong enough to withstand attacks from Huns and other groups. Payoffs were a big part of its tactics, but it also had a far stronger army than the West. While the likes of Honorius and Valentinian III did nothing to prevent the Goths from taking over the army, Leo I of the East quickly replaced his German troops because he doubted their loyalty. He brought Isaurians into the fold in return for making them subjects of the empire. Zeno went a step further by creating an army of native troops. The Eastern Empire survived several wars toward the end of the fifth and beginning of the sixth centuries and began to flourish under Justinian.

There was an obvious Gothic crisis for both empires to deal with in the latter decades of the fourth century. It is likely that the disruption was caused by a major environmental shift as malaria was recorded in the North Sea while glaciers started to advance in China. Reports of barbarian hordes cramming into the Rhine started appearing with greater regularity from 376 onwards. Tens of thousands of people were displaced by the marauding Huns who caused terror wherever they went.

Gothic families fled from the terrifying Huns and were soon crammed together near the edge of the Danube. The Goths and Visigoths who had suffered the wrath of the Huns were often converted to Christianity and were also occasional allies of the Roman Empire. When Valens allowed them to cross the Danube, it was a golden opportunity to increase the empire’s might. Bringing these so-called barbarians into the empire on fair terms would have been a great move. They were cultured and organized people who were also excellent fighters.

Instead, the Romans refused to help and the 150,000 or so Goths who had crossed the Danube expecting some kind of welcome, turned against the establishment and ultimately hastened the demise of the Western Empire. However, it was the East that suffered first as Valens died and his army was practically destroyed at the Battle of Adrianople in 378. Goths marched on Constantinople but were repelled by the Arab troops that fought for the East. Theodosius initially pursued the enemy but wisely agreed to sign a treaty.

The treaty didn’t last long as Alaric marched on the city less than 20 years later. Further diplomacy helped quell the advances of Alaric who received lands in modern-day Albania. In 401, Alaric decided to expand West. Stilicho apparently had eyes on seizing the Byzantine throne, but he didn’t follow through and was killed in 408. The ensuing chaos resulted in the slaughter of thousands of barbarian women and children. They were the families of foederati: people who received the benefits of the empire in exchange for military service, but were not Roman citizens). The outraged barbarian men readily joined Alaric’s ranks; as many as 30,000 of them. On August 24, 410, they got their revenge as Rome was sacked.

10 – The East Were Experts in Diplomacy

In contrast to the ham-fistedness of the West, officials in the East had some grasp of diplomacy. One of the most prominent examples was how it dealt with the threat of Alaric. As soon as the Visigoth’s power was apparent, Rufinus entered into secret negotiations with him to put an end to Alaric’s march on Constantinople. As well as bestowing the rank of general upon Alaric, Rufinus ensured the followers of the Visigoth were well compensated with grain and gold. It is important to note that Alaric was only too happy to agree. His scouts realized that they didn’t have the special weaponry necessary for a successful siege.

Perhaps a better example is the negotiation between the Eastern Empire and the Sassanids. Although it seems as if the West faced the greater external threat in the fifth century, the Byzantines had the powerful Persian Empire on their doorstep. As dangerous as the barbarian tribes were, they consisted of a diverse range of tribes that were not organized as a collective. In contrast, the Sassanid Empire was a coordinated and mighty state.

It seemed as if there could be a war between the two empires when Sassanid Emperor Vahahran invaded in 421. Although Theodosius II started getting the better of his enemy in 422, he still agreed to a peace treaty because the empire was having problems in Thrace. It was peace that lasted, with the occasional break, for over 150 years. True, there were mitigating circumstances. For example, the Kushans were threatening Persia and the kingdom suffered from a seven-year famine in the 480s, followed by a wipeout of an army and the death of its King, Firuz, in 488 or 489. Even so, the Eastern Empire was forced to exercise diplomacy with the Persians on occasion. For example, Kavad I attacked Emperor Anastasius I in 502 but peace was quickly resumed.

In hindsight, the fall of the Western Roman Empire was practically a certainty when it split with the East in 395. The Eastern Empire had a few advantages that the West didn’t; namely the location of its capital and the relative lack of barbarian threats. However, the West signed its death warrant by allowing the military to hold an unhealthy amount of power. It also did nothing to prevent the infiltration of its army by barbarians, and it allowed corruption to eat away at the fabric of its society. While the East had many flaws, it had far less than its Western counterpart, which is why it survived for almost 1,000 years after Rome was taken in 476.

Corruption and the Decline of Rome – Ramsay MacMullen

The Fall of the Roman Empire: The Military Explanation – A. Ferrill

The Fall of the Roman Empire – Michael Grant

A Handbook of the Byzantine Empire Part I – H. Goodacre