The Last Days of Rome: How A Great Empire Fell With Barely a Whimper 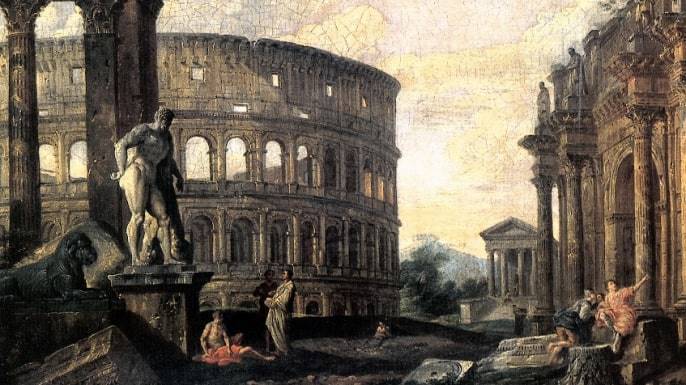 The Last Days of Rome: How A Great Empire Fell With Barely a Whimper

Unlike the valiant last stand by Constantine XI in Constantinople which marked the fall of the Byzantine Empire in 1453, the Roman Empire in the West did not fall after a notable battle. Indeed, it is perhaps ironic that one of the greatest empires in history surrendered rather meekly without much of a struggle. Although the end of the empire is said to have occurred when Odoacer marched into Rome and deposed Emperor Romulus Augustus on September 4, 476, the end was nigh for quite some time.

Although Diocletian managed to bring the disastrous Third Century Crisis to an end by taking control in 284, the Empire was fundamentally weakened. Aside from widespread economic strife throughout the Empire in the fourth century, the tribes of Germany significantly increased their populations and became more of a threat.

By 376, an enormous influx of barbarians from across the Danube threatened the Eastern part of the Empire, and the Romans suffered a disastrous defeat at Adrianople in 378 when Emperor Valens died with most of his army. By the end of the fourth century, Emperor Theodosius was reliant on barbarian warlords who lacked discipline and loyalty. It was the equivalent of allowing wolves into the chicken coop.

To make matters worse, Theodosius had to contend with the usurper Magnus Maximus who declared himself Emperor of the West in 383. Theodosius finally defeated his enemy in 388 but with heavy losses on both sides that only served to weaken the Empire. When he died in 395, his sons Honorius and Arcadius became emperors. Both were incompetent and little more than puppet rulers.

Much like the Fourth Crusade and the Sack of Constantinople in 1204 was the beginning of the end for the Byzantine Empire, the Sack of Rome in 410 can be seen as the start of the Western Empire’s last days. The King of the Visigoths, Alaric, first attempted to invade Italy in 401 but was repelled by Stilicho at Pollentia the following year. When Emperor Honorius ordered a massacre of Goths serving in the Roman military, some 30,000 of them defected to Alaric in 408.

He laid siege to Rome that year and forced its citizens to pay a sizeable tribute to prevent them from starving to death. Alaric did not want to destroy the Empire; he just wanted a recognized position within its borders. After another siege in 409, he tried to negotiate with Honorius the following year. The influence of an enemy Goth during negotiations angered Alaric, so he laid siege to Rome once again. This time, he succeeded in breaking through and sacked the city.

Oddly enough, there was relatively little destruction during the three-day sacking of Rome. Alaric invited barbarian slaves to join his army, and a large proportion was happy to do so. He had no intention of remaining in Rome and decided to sail to Africa. However, his ships were battered by storms, and he died of fever. Although Alaric did not remain in Rome to conquer it, the sacking of the city was an indication of just how weak the Empire in the West was. The countdown to its demise began in earnest.

The Empire disintegrated further throughout the fifth century. It lost Carthage to the Vandals in 439 and was at the mercy of Attila the Hun during the 440s and early 450s. After successful campaigns against the Eastern Empire, he turned his attention to the West, and while he suffered defeat at the Battle of the Catalaunian Plains in 451, he invaded Italy. Attila accepted a favorable peace treaty but planned to invade Italy once again before his death in 453.

After a brief resurgence under the rule of Emperor Majorian (457-461), the Empire once more plunged into chaos. A Germanic general called Ricimer entered Rome in 472, but he died just six weeks later. Over the next four years, the Western Empire had a succession of Emperors who were little more than puppets for barbarian warlords.

In 475, a man named Orestes drove Emperor Julius Nepos out of the capital Ravenna and declared his 16-year-old son Emperor Romulus Augustus. The teenager was never recognized as the ruler outside Italia, and when his father refused to grant federated status to the Heruli, its leader Odoacer launched an invasion. He chased Orestes to Pavia and then Piacenza where the Emperor’s father was executed on August 28, 476.

On September 4, 476, the Senate compelled Romulus Augustus to abdicate, and it is typically on this day that the Western Roman Empire is said to have officially fallen. The unfortunate boy remained in Ravenna, but instead of executing him, Odoacer showed mercy by sending him to live in Campania. The fate of the last Emperor of the West is unknown because he disappears from the historical record.

Although 476 is used as a convenient date to mark the end of the Empire, it is a little more complicated. The deposed Julius Nepos continued to claim that he was the Emperor of the West until he was murdered in 480. In the meantime, Odoacer began negotiations with Zeno, the Emperor of the East. Although Zeno accepted Odoacer as viceroy of Italia, he insisted that the barbarian continue to recognize Julius Nepos as the Emperor in the West.

Odoacer invaded Dalmatia when he learned of Nepos’ murder while in 488, Zeno authorized the Ostrogoth Theodoric the Great’s invasion of Italia. After five years of indecisive fighting, Odoacer and Theodoric agreed to rule jointly, but the Ostrogoth betrayed his new ‘ally.’ At a banquet celebrating their new arrangement in 493, Theodoric’s men slaughtered Odoacer’s troops, and he cut his rival in half.

And so one of the greatest Empires in history ended not with a fearsome battle, but with a sorry capitulation. Its hold on the East lasted for almost 1,000 years after that, and while the Byzantine Empire also fell apart meekly, the final battle at Constantinople was at least more befitting of a regime’s downfall than the slow, painful demise of Rome.

ThoughtCo – Alaric, King of the Visigoths and the Sack of Rome in A.D. 410