Theodosius I: The Reign of the Last Roman Emperor in the East and West 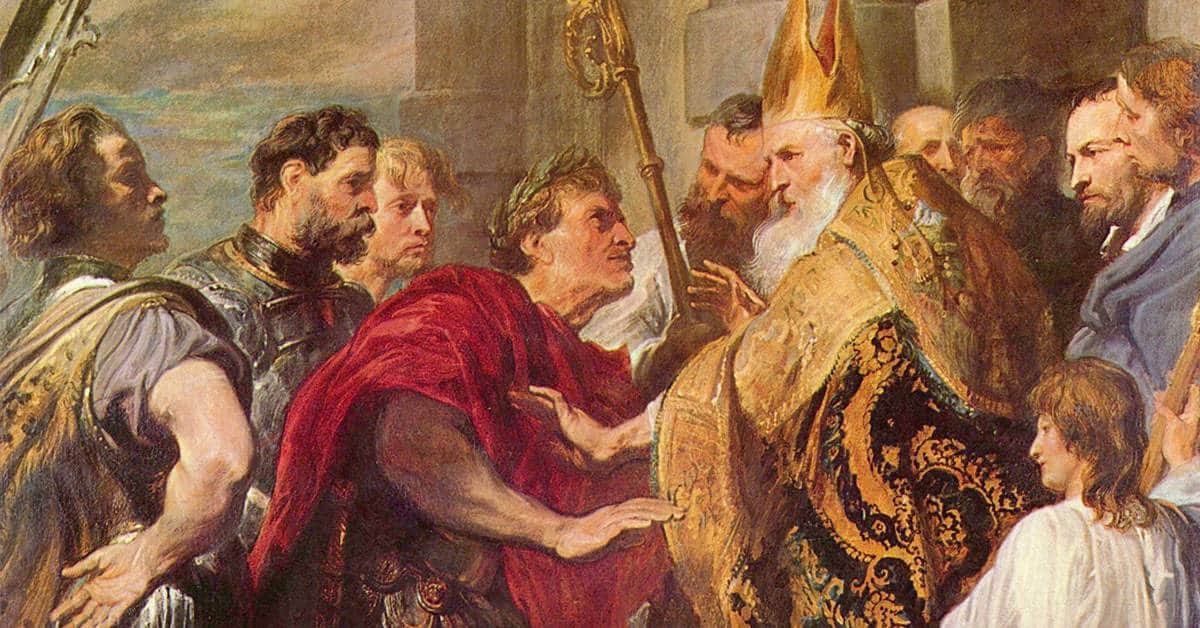 Theodosius I: The Reign of the Last Roman Emperor in the East and West

For a little over two and a half years, Theodosius I ruled over both the Western and Eastern halves of the Roman Empire. Upon his death in 395 AD, his sons, Honorius and Arcadius, took over the East and West halves respectively; no one ever ruled both parts of the Empire again although a few tried to claim it after the death of Julius Nepos in 480. Theodosius inherited an Empire on the cusp of ruin and through grueling and expensive civil wars and weak successors; he did little to improve matters.

Theodosius was born in Spain in 347 and was the son of Theodosius the Elder, a high-ranking military officer serving in the Western Roman Empire. Young Theodosius served on his father’s staff in Britannia, and he was involved in the quelling of the Great Conspiracy of 368 which involved a rebellion by several barbarian tribes.

In 373, he became the governor of Upper Moesia and was involved in fighting against the Sarmatians and Alemanni. It is possible that Emperor Valentinian I dismissed Theodosius from command after he suffered a couple of defeats against the Sarmatians. When the Emperor died suddenly in December 375, there was complete chaos in the Western part of the Empire.

Theodosius the Elder was executed in 376; possibly because he chose the wrong side in the power struggle that ensued after Valentinian’s death. The younger Theodosius realized that it would be expedient to make himself scarce during the period of political intrigue. He knew that his Spanish roots made him a target for persecution, so he fled to his estates in Spain.

When the emperor died, his sons, Valentinian II and Gratian who co-ruled the Western part of the Empire while Valens ruled the East, succeeded him. The Empire was plunged into further turmoil with the death of Valens at the Battle of Adrianople in 378. He foolishly attacked the enemy without waiting for Gratian to arrive and lost two-thirds of the army in the process.

Valens had died on 9 August 378, and Gratian became Emperor in the East. He unexpectedly called Theodosius to his court and promoted him to the rank of commander-in-chief of the army. The East was in the midst of the Gothic War (376 – 382), and Gratian realized that he was unable to resolve the situation. Shockingly, on 19 January 379, he promoted Theodosius once again, this time to the rank of Augustus. Just three years after the execution of his father, Theodosius was now the Emperor of the Eastern Roman Empire. Meanwhile, Gratian returned to Rome to govern the West with his brother.

Theodosius began forming a new army from his HQ in Thessalonica. He forced farmers to join the military and also bought the services of mercenaries from beyond the Danube. Some farmers mutilated their thumbs to avoid being drafted, but Theodosius made them join anyway. After a stalemate that lasted for four years after Adrianople, the Romans and Goths reached a peace settlement on 3 October 382. Theodosius agreed to allow the Goths to settle in the Empire under their own laws. In return, the Goths would provide troops and receive annual food subsidies. For now, Theodosius was emperor in name only, but that was about to change.

The Death of Gratian

Gratian appeared to make a good decision by bringing Theodosius into the fold as his new emperor finally made peace with the Goths. Gratian himself was initially an energetic leader but soon preferred the trappings of power to the tedium of governance; this is one of the reasons why he promoted Theodosius in the first place (although some historians believe he was ‘forced’ into it by the army).

After the Battle of Adrianople, Gratian made the mistake of using a group of Alans as his personal bodyguard and dressing as a Scythian warrior. His conduct angered the soldiers and a general named Magnus Maximus started a revolt in Britain and invaded Gaul. Gratian was in Paris at the time, and when his men deserted him, he was forced to flee to Lyon. However, the governor handed him over to a rebel general named Andragathius and Gratian was executed on 25 August, 383. Now, Theodosius was unquestionably the Roman Emperor in the East, and he promoted his son, Arcadius, to the rank of co-emperor upon the death of Gratian.

Theodosius Takes it All

Maximus continued his march to Italy in an attempt to overthrow Valentinian II who was only 12-years old at the time. However, Theodosius saved the day by sending his general, Flavius Bauto, to help the young Emperor with a powerful army. After negotiations, Theodosius and Valentinian II agreed to allow Maximus to become co-emperor in the West in 384.

Theodosius was unable to do anything more to combat the rise of Maximus because he lacked the resources to defeat the enemy and secure his borders. For his part, Maximus was a popular emperor and was notorious for executing heretics. He created an edit in 387 or 388 which condemned Christians for burning down a synagogue; an act which led the Bishop of Milan, Ambrose, to declare: “the emperor has become a Jew.” It was not this edict that led to his downfall. Instead, Maximus got greedy and wanted sole leadership, so he ousted Valentinian II who fled to the court of Theodosius in 387.

At that point, Theodosius was in a much stronger position. He had successfully negotiated peace with Persia, so he no longer had to spend much so time and resources on his eastern frontier. He finally had the power, and an excuse, to deal with Maximus and he began his campaign in July 388. Theodosius defeated the usurper who was executed on 28 August, 388 after surrendering at Aquileia. Maximus’ son, Flavius Victor, was also murdered.

Theodosius was de facto emperor in the West as Valentinian II was little more than a figurehead with a Frankish general named Arbogast as the real power under Theodosius’ orders. Valentinian was present when his friend, Harmonius, was murdered for allegedly taking bribes. The young emperor finally grew tired of being dominated and formally dismissed Arbogast when the Frank forbade him to lead Gallic armies into Italy.

Arbogast tore the order up in public and on 15 May 392, Valentinian II was found hanged in Vienne. Arbogast claimed it was suicide but sources such as sixth-century writer, Zosimus, believe that the general either murdered the emperor himself or paid a member of the Praetorian Guard to do so. Either way, Theodosius was now the Emperor of West and East.

Within a few months of Valentinian’s death, Arbogast betrayed Theodosius by elevating Eugenius to the rank of Emperor in the West without the Eastern leader’s consent. Arbogast did this because he knew the Senate would be more receptive to a Roman than a Frank as a leader. Eugenius was connected with the Senate’s pagan aristocracy which was anathema to the Christian Theodosius. He bided his time before making moves against the new puppet ruler in the West.

Eventually, he made his anti-pagan laws even more severe by completely forbidding the worship of pagan gods on 8 November, 392. Two months later, he promoted his other son, Honorius, to the rank of Augustus as a clear indication that he would not tolerate any leader outside his family.

In spring 393, his enemies gathered in support of Eugenius in Italy, but Theodosius did not leave Constantinople until May 394. He left his sons behind and traveled with a large force comprised mainly of barbarians and their allies. Theodosius met Eugenius at the Battle of the Frigidus on 4 September, 394 in a fight to determine the fate of Christianity in the Western Roman Empire.

Both armies had 50,000 men in what became a two-day battle. Theodosius attacked without reconnaissance on day one and suffered heavy casualties. He received a welcome lucky break at the beginning of day two when a group of men picked by Arbogast to attack the emperor elected to desert to his side. Theodosius ordered another attack and was aided by a Bora wind which blew dust into the faces of Eugenius’ men, causing their lines to break. They were routed, and Eugenius was beheaded. Arbogast fled to the mountains but committed suicide when he realized that escape was impossible.

The Death of Theodosius & His Legacy

The Empire was briefly unified, but Emperor Theodosius became seriously ill, possibly as a result of his excursions against Eugenius. He died on 17 January 395 just four months after his success at the Frigidus. Upon his death, his army rapidly disintegrated as the Gothic contingent began raiding parts of the Empire and even made it as far as Constantinople. Neither the 18-year old Arcadius in the East nor 10-year old Honorius in the West proved capable of ruling and the decades after Theodosius’ death were marked by a slow decline and ultimately, a collapse of the Roman Empire in the West.

Theodosius is remembered for hiring large numbers of mercenaries into the Roman army and for being involved in two civil wars that depleted the Empire’s resources. He was the beneficiary of political intrigue and turmoil in the latter part of the Western Roman Empire but left completely inept heirs in charge. He simply wasn’t in complete control long enough to make a difference, and when he died, the Western Empire had little hope of surviving. His successor, Honorius, was utterly useless and did nothing as Rome was sacked in 410, for the first time since the aftermath of the Battle of the Allia in 390 BC.