Preserving Christianity: How the Byzantine Empire Stood Firm During the Second Arab Siege of Constantinople 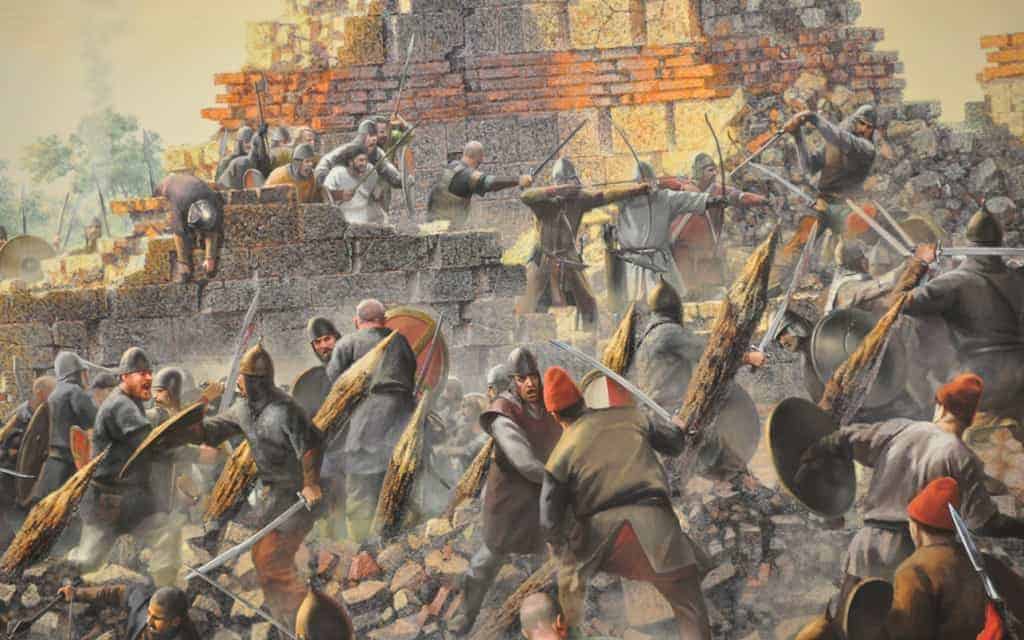 Preserving Christianity: How the Byzantine Empire Stood Firm During the Second Arab Siege of Constantinople

The Byzantine stand at the Siege of Constantinople in 717/718 was one of the most crucial military successes of the Middle Ages. Had the Arabs successfully captured the Byzantine capital, they would have been able to march into south-eastern Europe almost unopposed. The delay caused by their defeat ensured that Western European forces were able to come together and drive the Muslims back. The city did not fall to the forces of Islam for over 700 years until Mehmed the Conqueror took Constantinople on May 29, 1453.

The Arab threat was so great that the Bulgars, who were hardly fans of the Byzantines, stood side by side with their erstwhile enemies to ensure the Muslim invaders were defeated. The Bulgars had only established friendlier relations in 716 but Khan Tervel knew the implications of a Byzantine defeat. Also, the Bulgars had designs of their own and wanted to be the ones to capture Constantinople at a later date. It was a long brutal siege, but eventually, the Byzantine and Bulgar combined armies forced the Umayyad Caliphate to retreat and while the Arabs continued to harass Byzantine territories, their goal of total conquest was thwarted.

Timing is everything and when Islam was formed, its leaders were determined to spread their faith through a combination of warfare and proselytization. The Muslims arrived on the scene just as the Persians and Byzantines had almost destroyed one another during the quarter century-long Byzantine-Sasanian War (602 – 628). The Arabs easily annihilated the weakened Sassanid Empire and turned their attention to the Byzantines. When Mu’awiya established the Umayyad Dynasty in 661, his goal was to destroy the Christian Byzantine Empire. According to legend, the Caliph said that whoever was involved in the capture of Constantinople would have all his sins forgiven.

Between 674 and 678, Muslim armies tried and failed to capture Constantinople. The Byzantines used Greek Fire to destroy Arab ships and in 678, Emperor Constantine IV was able to force a treaty with Mu’awiya. It was a 30-year treaty and the Caliph agreed to pay 3,000 gold pieces, 50 thoroughbred horses, and 50 captives per annum. The peace didn’t last long because the Arabs resumed their attacks under the leadership of Abd al-Malik (685 – 705). Although Islam was spread as far as India and Spain, the Muslims continued to obsess over the capture of Constantinople.

Caliph Walid aimed to capture the city but he died in 715 before he had the chance to begin the assault. Sulayman was his brother and successor, and he proceeded with the project. According to Arab accounts, a Caliph with the name of a prophet would be the man to take Constantinople. Sulayman (or Solomon) was the only Umayyad family member to have such a name. However, he became ill and had to entrust the invasion to his brother, Maslama ibn Abd al-Malik.

Once again, it seemed as if the Arabs had perfect timing because the Byzantine Empire was facing a leadership crisis. Anastasius II became emperor in 713 and he knew an invasion was coming so he repaired the walls, brought in supplies, and sent for more troops. A revolt by his soldiers led to the crowning of Theodosius III as emperor in 715. However, the provincial tax collector was never comfortable as ruler and the Armeniakon and Anatolikon theme armies wanted a competent military commander, and they found one in the nick of time.

A man named Conon was set to change the course of history. He was an excellent soldier and commander and in 716, he became the leader of the Anatolian theme army. He became known as Leo the Isaurian and in 717, with the backing of the military, the general was crowned Emperor Leo III. To be fair, it wasn’t a normal usurpation. Leo negotiated with Theodosius III and Patriarch Germanos and the emperor was seemingly happy to step aside and let someone else handle the crisis. Leo agreed not to disturb the church and he allowed Theodosius to retire and become a monk.

Once in power, Leo quickly went to work because he knew the Arab invasion was imminent. Leo stored extra food, prepared the navy, and further strengthened Constantinople’s already impressive fortifications. The Byzantines were ready and in August 717, Maslama was given command of the Arab forces and marched through Anatolia to the city walls. The size of the invading force varies according to the source. al-Masudi, an Arab writer in the 10th century, said there were 120,000 troops but Michael the Syrian, a 12th-century Syrian writer, claimed there were 200,000 Arabs. According to Theophanes the Confessor, the invaders had 1,800 ships.

“The Cruelest Winter that Anyone Could Remember”

These are the words of English historian John Julius Norwich although the Arab invaders probably thought it wouldn’t come to that when they launched their August invasion. However, the siege lasted for a year as the Muslims tried and failed to breach the stubborn Byzantine defense. Maslama ordered an attack on the walls as soon as his army arrived in August but the defenders had no problem in beating it back. The Arab commander quickly realized that continued frontal assaults were pointless so he ordered his men to dig trenches to prevent the Byzantines leaving the city.

As a consequence, much of the early fighting took place in the sea and Admiral Suleiman led part of his navy on the Hellespont. When the ships approached the city, a fast current took them by surprise and caused chaos. Leo spotted the difficulty of the enemy and took advantage by lowering the chain that protected the Golden Horn and swiftly attacking the Muslim ships before they could get in formation. With the aid of Greek Fire, the Byzantine fleet destroyed and captured a significant number of ships. Sulieman knew that another setback of that nature would destroy his fleet so he didn’t want to sail past the city.

The bad news kept on coming for the invaders; they learned that Caliph Sulayman had died from a stomach complaint and was replaced by Umar II, a man not renowned for his military prowess. To make matters worse, the Bulgars were making their presence felt and in autumn, they began attacking the Arabs on the West side of the Bosporus. The Bulgars massacred any Arab camp they found and their success tempted the Byzantines into opening their gates to try and break the siege. However, they were halted at the Arab trenches and retreated back into Constantinople. If the Muslim army thought their luck would change during the winter, they were sorely mistaken.

Winter in Constantinople was as cold and bitter as anyone could remember. As tough as it was for the city’s defenders, at least the emperor had ensured there were enough supplies. The Muslims were used to warmer weather and the cruel winter resulted in the deaths of thousands. Snow remained on the ground for three months and their problems were exacerbated by serious delays in supplies arriving from Egypt. The invaders struggled on until spring when they hoped a new fleet and 50,000 troops from Egypt would turn the tide.

The 400 Muslim ships managed to sneak past the Byzantine fleet at night and sailed to the Hellespont. Their goal was to cut off supplies to the city but Leo had other ideas. His navy, aided by the desertion of Muslim sailors (who were actually Coptic Christians forced to work with the Arabs) launched a lightning attack in June 718 and once again, Greek Fire caused panic, confusion, and death amongst the enemy. The Christian sailors in the Muslim fleet that hadn’t already deserted, did so now and were welcomed by the Byzantines. After demolishing the Muslim blockade in the north of the city, Leo attacked the Arabs on the Asian side of the Sea of Marmara and won another crushing victory.

By now, the Arabs had no chance of forcing Constantinople to capitulate by sea so the rest of the fighting happened on land. Leo sent envoys to the Bulgars and Khan Tervel attacked the Muslims, handing them a devastating beating at the Battle of Adrianople. The Arabs lost over 20,000 men in the battle and it was clear that the siege was going to fail by that time. Umar decided to raise the siege when he heard rumors about a Frankish army that was riding to Constantinople to aid the Byzantines. Maslama led what remained of his army away from the city on August 15, 718. Once again, Constantinople proved to be too tough of a nut to crack; it wouldn’t be the last time.

Further disaster awaited the Arab invaders during their retreat as a storm destroyed the majority of the remaining ships. To say the Muslim siege of Constantinople was a complete catastrophe is putting it mildly. They lost an estimated 180,000 soldiers in total and all but five of their 2,000 ships made it home. If Maslama had succeeded in taking the city, Islamic forces would have had a relatively easy journey into central Europe. They would also have ruled European waters because no other nation had a navy to match them. Over 700 more years of Byzantine history would cease to exist and it’s fair to say that the world would have been a much different place.

The failure at Constantinople also severely weakened the power of the Umayyad Caliphate. It suffered massive losses in terms of manpower and finance. So much so in fact that Umar considered withdrawing his forces from recent conquests such as Transoxiana and Hispania along with evacuation of other territories. His advisors talked him out of these drastic measures but within 30 years, the Umayyad Caliphate was overstretched and the Abbasid Revolution (747 – 750) resulted in a power shift as the Umayyads lost their hold on the Islamic Empire.

“Byzantium. The Surprising Life of a Medieval Empire.” Judith Herrin. 2007.