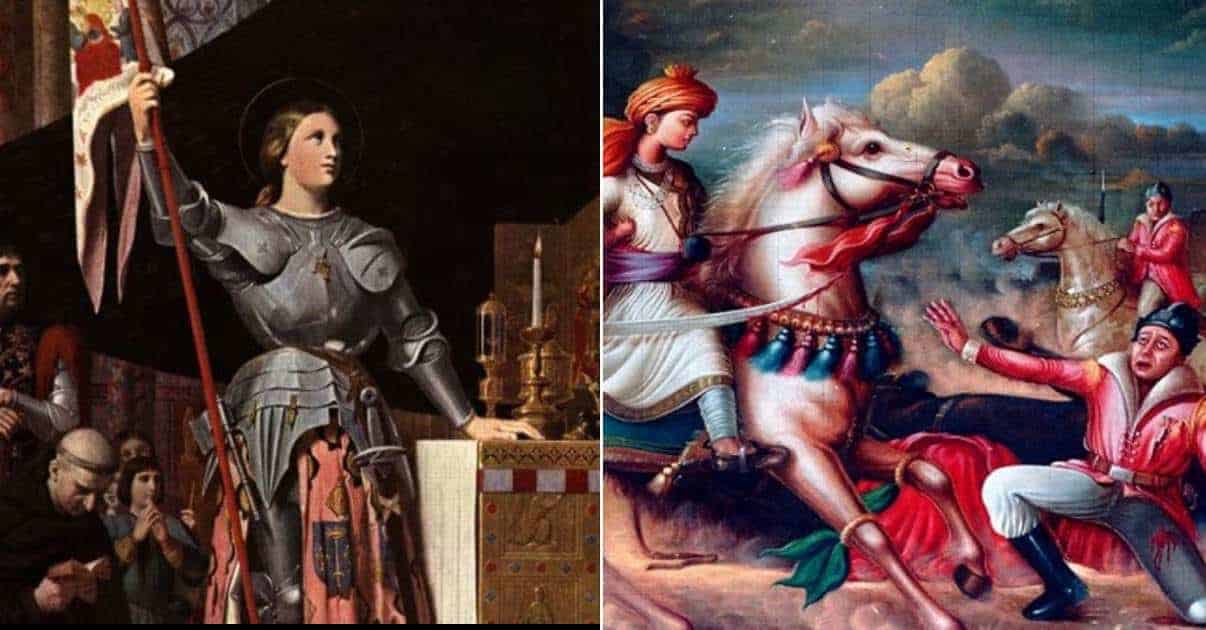 Tomoe Gozen (circa 1157 – 1247) is perhaps Japan’s most famous female samurai, or onna-bogueisha. A formidable warrior, she was famous for her courage, physical strength, and skill with a variety of weapons. She put those assets to good use on the battlefield, as she fought in the Japanese civil war that led to the creation of that country’s first shogun (military dictator) government – the political system that would govern Japan from the 1180s until 1868.

It was not unusual for women in Japan to receive military training, and for centuries, women of the samurai class were taught swordsmanship, archery, and the use of polearms. It was defensive training, however, for the women to protect themselves and their households in the absence of their menfolk. Tomoe however wanted to test her mettle and training in battle, so she sought an active career as a warrior, and was accepted into the service of a general named Minamoto Yoshinaka.

As described by contemporaries: ” Tomoe was especially beautiful, with white skin, long hair, and charming features. She was also a remarkably strong archer, and as a swordswoman, she was a warrior worth a thousand, ready to confront a demon or a god, mounted or on foot. She handled unbroken horses with superb skill; she rode unscathed down perilous descents. Whenever a battle was imminent, Yoshinaka sent her out as his first captain, equipped with strong armor, an oversized sword, and a mighty bow; and she performed more deeds of valor than any of his other warriors.”

By 1184, Tomoe had become famous because of her fighting skill and exploits. Her greatest exploit came that year, at the battle of Awazu, when she was part of a small force of 300 samurai that was set upon by a far bigger army of around 6000. She fought with extreme courage and skill against overwhelming odds, but eventually, Tomoe’s force was whittled down from 300 to only Tomoe, her commanding general, Yoshinaka, and five other warriors. With the end drawing near, Yoshinaka ordered her to leave the battlefield, as it would be shameful for him to die alongside a woman. Reluctantly, she obeyed, beheading one more enemy warrior on her way out. Thereafter, she fades from history.

France’s national heroine Joan of Arc, also known as the Maid of Orleans (1412 – 1431), is perhaps the world’s most famous female warrior of all time. As a teenage girl, she led French armies to victory against rampaging English invaders during the Hundred Years War. Fighting at the head of her forces, she won a series of miraculous victories that revived French national spirit, and turned the tide of the war.

Born into a peasant family in Lorraine, Joan was noted for her piety since childhood. As a teenager, she began seeing visions from a variety of saints, directing her to save France from English domination. At the time, France was exhausted, downtrodden and reeling from a series of humiliating defeats at the hands of the English. The French crown was also in dispute between the French Dauphin, or heir to throne, and the English king, Henry IV.

At age 16, Joan left home, and led by voices and visions from the saints, traveled to join the Dauphin. In 1429, she convinced the French heir to give her an army, which she took to relieve French forces besieged by the English at Orleans. Endowed with remarkable mental and physical courage, Joan led her men in a whirlwind campaign that lifted the siege in 9 days, and sent the English fleeing. In so doing, she won a momentous victory that repulsed an English attempt to conquer France.

After the victory at Orleans, Joan of Arc convinced the Dauphin to crown himself king of France, which he reluctantly did. She was then sent on a variety of military expeditions, and in one of them in 1430, she was thrown off her horse and captured by Burgundians. Her captors kept her for several months, while negotiating with the English, who were eager to get their hands on the girl who had caused them so much trouble.

Eventually, Joan was sold to the English, and although she had saved her country, she was now abandoned by her countrymen to fend for herself. The English and their French collaborators accused her of heresy and witchcraft and locked her in a dark and filthy cell pending her trial. Manacled to her bed with chains, she was incessantly harassed by her inquisitors at all hours of day and night in an effort to break her will and spirit. She adamantly refused to confess to wrongdoing, and her accusers were unable to prove either heresy or witchcraft. In frustration, they turned their attention to the way in which she had dressed in male attire on the field of battle. Claiming that such cross-dressing violated biblical injunctions, they convicted her. On May 30th, 1431, she was taken on a cart to her site of execution in Rouen, where the 19-year-old Maid of Orleans burned to death.

Two decades after her death, an inquisitorial court was ordered by a new Pope, to reexamine Joan of Arc’s trial. The new court debunked all the charges against her, cleared her posthumously, and declared her a martyr. In 1803, Napoleon Bonaparte made her a national symbol of France. Five centuries later, she was beatified in 1909, then canonized as a Saint by the Catholic Church in 1920. Today, Saint Joan of Arc is one of the patron saints of France, and perhaps the most famous female warrior of all time.

Lakshmi Bai, also known as the Rani of Jhansi (circa 1830 – 1858), was the rani, or queen, of the Indian princely state of Jhansi in northern India. She is best known as a leader of the Indian Mutiny against British rule in 1857-1858, during which she personally led troops and fought in the line of battle. Her exploits made her an Indian national heroine, a symbol of resistance to British rule, and a martyr for independence.

Born and raised in an upper-caste Brahman family, Lakshmi had an unusual upbringing for a girl of her class. Brought up among boys in a prince’s household, she was taught and became proficient in martial arts such as swordsmanship, shooting, and horseback riding. Upon coming of age, she was married to the maharaja, or princely ruler, of Jhansi.

The couple did not have children, but her husband adopted a child as his heir. Upon her husband’s death, the British employed legal chicanery, refused to recognize the adopted child as heir to Jhansi, and annexed that state to the territory of the East India Company. When informed of this, Lakshmi vowed “I shall not surrender my Jhansi!“, which became her war cry in the subsequent rebellion.

In 1857, Indian troops in British service mutinied, and their rebellion quickly spread throughout northern India. Lakshmi was declared regent of Jhansi, and governed on behalf of the underage heir. She raised troops and joined the rebels, and disgruntled natives from across Indian flocked to her standard to offer their support and fight under her command.

She led her forces in a series of successful engagements that asserted her command and consolidated her rule. Eventually, the British sent an army to recapture Jhansi. When they demanded her surrender, she responded with a proclamation stating: “We fight for independence. In the words of Lord Krishna, we will if we are victorious, enjoy the fruits of victory, if defeated and killed on the field of battle, we shall surely earn eternal glory and salvation.”

The British surrounded Jhansi, and a fierce battle ensued, during which Lakshmi Bai led her troops in offering stiff resistance. British heavy artillery eventually reduced her fortifications and breached the city walls. When Jhansi was about to fall, Lakshmi led a small force in a ferocious attack that cut its way to safety, fighting through the British siege lines with her child strapped to her back. She escaped, reached other rebel forces, and resumed the fight. She was finally killed in battle on June 17th, 1858, in an engagement against British cavalry.

OZY – When A Warrior Queen Took Down An Emperor

Medium – Battle of Salamis that Ended the Xerxes’ Ambitions in Greece

ThoughtCo – Biography of Artemisia I, Warrior Queen of Halicarnassus

Factinate – Lethal Facts About Artemisia I Of Caria, The Pirate Queen Of Ancient Greece

ThoughtCo – Who Were the Trung Sisters of Ancient Vietnam?