Battle of Salamis: Greeks Defeat the Persians & Save Greek Civilization 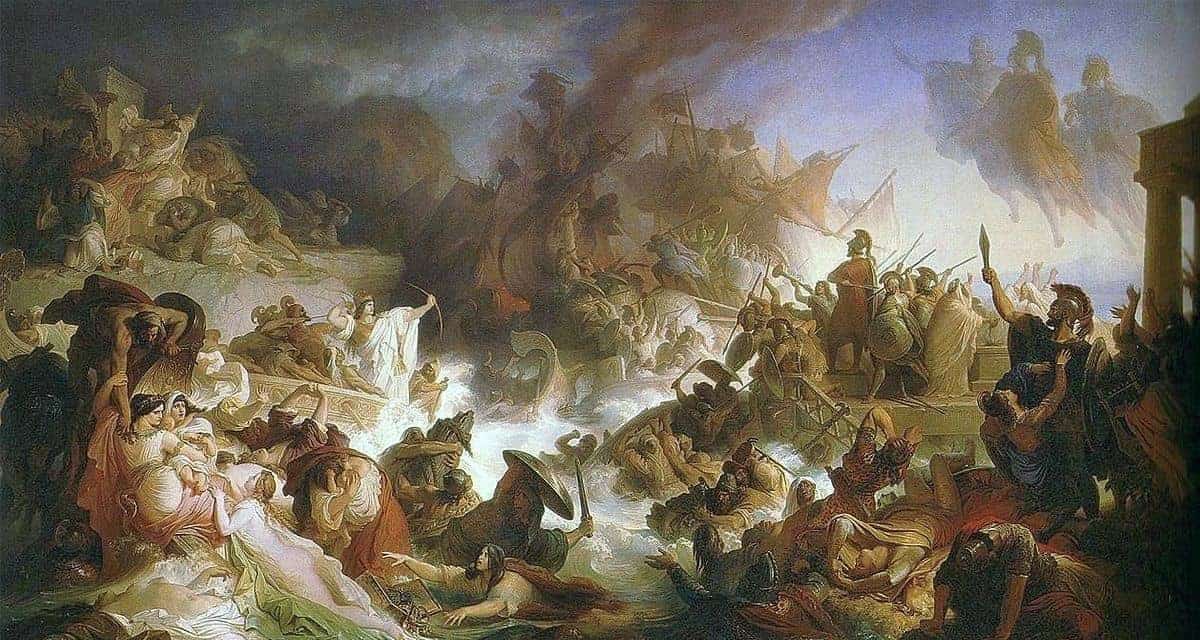 Much is made of the heroic stand by Leonidas at the Battle of Thermopylae in 480 BC. The sacrifice of the Spartan king and hundreds of troops was significant insofar as it delayed the Persian army’s march. However, it is the Battle of Salamis, which occurred shortly after Thermopylae, that was the crucial battle in the Greco-Persian wars which had begun in 499 BC.

The Persian king, Xerxes I, was eager to conclude the entire affair and was happy to engage the Greeks in a naval battle, especially since he had at least double the number of ships. However, he greatly underestimated the Greek resistance and made a crucial mistake which led to the defeat of his navy. Several historians believe that if Xerxes had won, it would have marked the end of the wars with a Persian victory. This would have damaged the development of Ancient Greece and western civilization as a whole. Indeed, the Battle of Salamis could be one of the most important battles ever.

Darius, I became the King of Persia in 522 BC after killing the usurper Gaumata who tried to claim the throne upon the death of Cambyses II. Since Darius was also a usurper, he spent much of his early reign dealing with revolts. One such uprising was the Ionian Revolt (499 – 493 BC) which was supported by Eretria and Athens; it also marked the beginning of the Greco-Persian Wars. Darius aimed to consolidate his power by punishing the rebels and expanding his empire into Greece.

Darius asked for the submission of various Greek city-states and even when they obliged, he still murdered their ambassadors. The Persians invaded Greece and had initial success before finally coming unstuck at the Battle of Marathon in 490 BC. The irate Darius wanted to return with a larger force, but rebellions in his empire brought a halt to his plans. He died in 486 BC before he could launch another Greek invasion and was succeeded by his son, Xerxes. The new leader was intent on finishing his father’s work, so he prepared a new invasion of Greece after first defeating a rebellion in Egypt.

Xerxes took his time on what he planned to be a decisive invasion of Greece. He decided to bridge the Hellespont to enable his army to march and also to dig a canal around Mount Athos’ isthmus. That Persia was able to complete these incredible engineering feats is a testament to the power and resources at its disposal.

Meanwhile, the Athenians knew that an invasion was coming and in 482 BC, agreed to create a fleet of triremes to fight off the Persians. Although Athens was one of the most powerful city-states, it knew it was no match for the might of Persia, so it persuaded other states to join. In 481 BC, Xerxes copied his father by asking for ‘earth and water’ from different city-states but he left Athens and Sparta out of the discussion on purpose. Within months, a number of city-states met at Corinth and formed an alliance, an amazing feat since many of these states were at war with one another. After deciding against defending the Vale of Tempe, the Greeks learned that Xerxes had crossed the Hellespont. The invasion had begun.

The Greeks were aware that the invading force was superior in numbers and believed it was necessary to get the Persians to fight in as narrow a space as possible. Once the Vale of Tempe was rejected because it could be bypassed, the Greeks settled on the pass of Thermopylae. It was chosen because it could be defended by a relatively small number of Hoplites. The Greeks were also able to block the straits of Artemisium to stop the Persian fleet from bypassing Thermopylae.

For three days, a group of around 7,000 men held off the Persian army which may have numbered anywhere from 100,000 to 300,000. It is difficult to say how long the Greeks could have held out, but they were betrayed by a man named Ephialtes. Once Leonidas learned of the treachery, he dismissed most of his army and bravely remained behind with around 1,400 troops. They fought to the last man in one of history’s most legendary final stands. Now that the Persians were able to bypass Thermopylae, the Greeks lifted the blockade at Artemisium and retreated to the Saronic Gulf.

Xerxes was determined to make an example of the Boeotian cities that refused to submit, so Thespiae and Plataea were pillaged and burned. Next, the Persians marched on the city of Athens but found that it has been evacuated. The Greeks decided to defend the Isthmus of Corinth, so they destroyed the only road through it and built a wall. On this occasion, Themistocles persuaded the Greek city-states to stay and force the Persians into battle. Yet again, they chose a narrow battleground to suffocate their much larger enemy.

The Persians Arrive at Salamis

It is difficult to determine how many ships were on both sides. Herodotus is the primary source for the battle, but he had a habit of exaggerating the size of armies. In all likelihood, the Greeks probably had in the region of 370 ships against at least 600 Persian ships, possibly as many as 800. Herodotus wrote that there were 3,000 Persian ships while Aeschylus offers a slightly lower figure of 1,207. Whatever the real figures, it is certain that the Greeks were vastly outnumbered.

In strategic terms, the Persians didn’t need to fight at Salamis, but it made sense given their numerical advantage. It is also a fact that Xerxes could call upon more experienced oarsmen since the Greek fleet had only been created a couple of years before the battle. The Persians wanted to fight in the open sea and had they succeeded in gaining this kind of space; victory would have been all but certain. Instead, the battle occurred on the Greeks’ terms; in a constricted area which negated the numerical supremacy of the Persians.

Why did the Persians sail into such a tight space? There is a suggestion that Themistocles fooled them into thinking the Greek alliance was about to collapse. He may have sent messages to Xerxes suggesting that the Greek fleet was about to break up as the city-states decided not to fight with one another after all. Whatever the reason, the Persians sailed into a disadvantageous position, a decision that changed the history of ancient civilization.

The night before the battle, the Persian fleet entered the Straits of Salamis; they were either trying to block the Straits (and thus a Greek retreat), or else they were simply getting ready to fight the next day. Xerxes also placed 400 troops at Psyttaleia island to kill any Greek survivors. If the Persians thought the Greeks were getting ready to flee, they were very much mistaken. Themistocles apparently gave a speech to his men getting them ready for the fight of their lives.

When Xerxes analyzed the sea the following morning, he would have seen a Greek navy getting ready to defend, and the Persians soon ran into difficulty as they advanced into the narrow strait. Instead of moving forward to meet the enemy, the Greeks wisely held firm and allowed the Persians to sail into disaster. By the time the ships faced off, they were almost beside one another, and the Greek hoplites were able to jump on board the Persian ships and engage in hand-to-hand combat. The combination of ships pressed against one another, soldiers fighting up close, and archers firing projectiles meant the whole scene must have been chaotic.

This suited the Greeks perfectly, and it is likely that many of the Persians couldn’t swim, so those who fell into the water were doomed. Soon enough, the Persian vessels were packed too closely to retreat, and the Greeks had enough space to pick off the enemy oarsmen. By the end of the naval portion of the battle, the Greeks lost around 40 ships compared to over 300 Persian vessels. The Greek hoplites were transferred to land, and they easily defeated the Persian force they encountered. Xerxes blamed the Phoenicians for the defeat and beheaded their captains. He also threatened to kill the rest of the Phoenicians, so they sailed to Asia as soon as possible after the battle had ended.

The Greeks had expected the Persians to return the following day but were shocked to learn that their enemy had fled. Xerxes decided to return to Persia and left a general named Mardonius in charge of the invasion. In truth, while the loss at Salamis was a disaster, it wasn’t the end for the Persians. After all, they still had a huge land army, and they controlled most of Greece. Even so, Salamis seemed to sap all confidence from the Persians, and they tried to negotiate a peace treaty with the Greeks. When it failed, they launched one final assault.

At the Battle of Plataea in August 479 BC, the Greeks mustered their biggest ever army which consisted of 80,000 – 100,000 men. They were still probably outnumbered by the Persians who had an army of 70,000 – 120,000. Ultimately, the Persians were routed and lost at least 50,000 troops while Mardonius died on the battlefield. It is believed that the Greeks also enjoyed victory at the naval Battle of Mycale on the same day. The Persians lost all 300 ships and most of its 60,000 soldiers. This marked the end of Greek defense as they began to launch a counter-offensive. Eventually, the Greco-Persian Wars concluded in 449 BC with the Peace of Callias between Athens and Persia.

A Short History of the Greeks: From the Earliest Times to BC 146 – Evelyn S. Shuckburgh