On This Day In History: St Joan of Arc Was Handed Over To The English 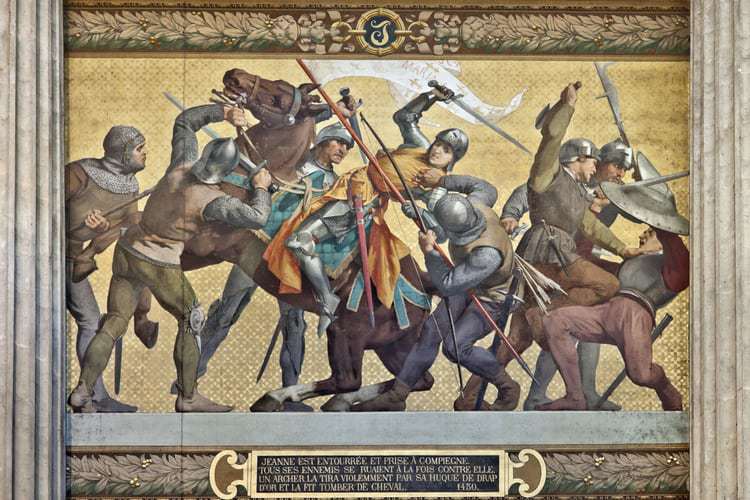 On This Day In History: St Joan of Arc Was Handed Over To The English

On this day in history, Joan of Arc was captured in battle and she was handed over by French rebels to the English army who had seized much of Northern France. Joan’s early childhood was scarred by the c the resumption of the Hundred Years War between England and France. In 1415 Henry defeated the French army at the battle of Agincourt. The English tried to occupy all of France, and they were aided by French rebels, from Burgundy. France was a lawless war zone during Joan’s childhood and the peasants suffered greatly from mercenaries and bandits.

Joan began to have religious visions and she went to the heir of France and told him that he was destined to lead France to greatness again. The young prince was very weak and possibly mentally ill. He and his court tried to trick the young peasant girl. The Prince dressed as a noble and had another sit on the throne to see if Joan had real powers. The young girl immediately went up to the Prince and declared her loyalty to him despite him being in disguise.

Joan was very popular with the common people and they saw her as a prophet. The French Court sent her to Orleans which was under English siege. This city was important to both the French and the English. Joan was sent with the army to relieve the siege of Orleans. She was able to rally the troops and they broke the English siege. This raised the morale of the whole of France.

Joan was a national hero. In 1430, the new French King ordered Joan to Compiegne, where the English and their Burgundians allies were located. During the fighting, she was thrown off her horse and taken captive by Burgundian soldiers. The Burgundians exchanged Joan for ten thousand golden coins on the 14th of July 1430 . She was abandoned by the new king and the French Court, she had served so well.

The English put Joan on trial on the charges of heresy and witchcraft. These were all capital offense in the Middle Ages. The clergy were also involved in her trial. During the trial, the young peasant women amazed the court with her brilliant arguments and her knowledge of religion During her imprisonment she was tortured and threatened with rape. On May 28, 1431, the tribunal announced that Joan of Arc was guilty of heresy. The tribunal claimed that the visions and voices that she had heard were demonic and she was a witch. On the morning of May 30th, she burned at the stake in Rouen and burned at the stake, at the age of 19 in May 1431.

The Catholic Church made Joan a saint and today she is a national hero. She is one of the symbols of France and is credited with the start of the fightback against the English during the Hundred’s Year War.