Losing Ground: 6 of the Most Controversial Retreats in Military History 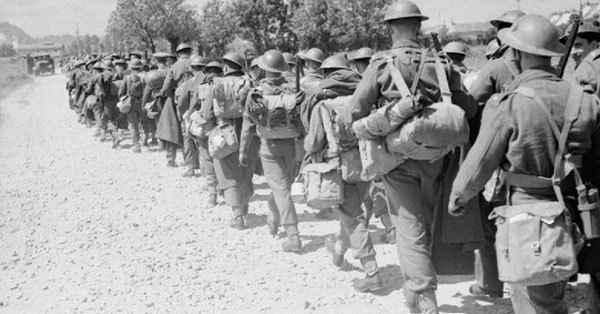 Losing Ground: 6 of the Most Controversial Retreats in Military History

5 – The Retreat from Dunkirk

Soon to receive the silver screen treatment at the hands of Christopher Nolan, Dunkirk is widely regarded as one of the most pivotal moments of the Second World War. It also holds considerable cultural currency, with today’s Brits still idiomatically using “Dunkirk spirit” to describe stoic resolve in the face of adverse circumstances (and Brits choosing to remain on beaches even during heavy rainstorms). It’s for good reason the expression is often used: for the circumstances in which British and Allied forces found themselves towards the end of May 1940 were nothing if not adverse.

Blitzkrieg warfare was working wonders for the Nazis in France, Belgium and the Netherlands. Already by mid-May—before the Allies had had a chance to coordinate an effective resistance—they found themselves outflanked and separated from one another by spearheading German forces. The Allies tried to break German lines, most notably at the Battle of Aras on May 21, but their attempts proved ineffective. Sensing defeat, the BEF (British Expeditionary Force) beat a retreat back to their perimeter line, and on May 27 they arrived. The British and French were now bottled up in a thin coastal corridor. And with the Germans advancing, all they could now do was wait for this bottle to be sealed up.

Realizing the severity of the situation, and foreseeing the imminent capitulation of the Belgians, the British launched Operation Dynamo: the naval evacuation of the BEF from the shores of Dunkirk. But what was so remarkable about this operation was not the temerity of the task they’d undertaken, but the makeup of the fleet undertaking it. Joining the British cruisers and destroyers were hundreds of fishing trawlers, drifters, yachts, tugboats, minesweepers and pleasure craft, just to name a few. Some had been requisitioned from the Thames by the Ministry of Shipping without the owner’s knowledge or consent. In most cases, however, civilians captained and crewed these ships, willingly putting their lives on the line for king, country and human decency.

Rescuing troops from the beach was a long and arduous process. The Luftwaffe had all but destroyed Dunkirk’s port, so Allied soldiers would have to be rescued from the beachfront. It was deemed too time-consuming to load troops onto boats directly from the shore, and only one of the two breakwaters flanking the beach (the eastern one) was considered fit for purpose. In a column stretching 1.3 kilometers with four men abreast, 200,000 troops were able to board British ships from this breakwater. The rest had to be lifted directly from the sandy shore.

The evacuation spanned 10 days between May 26 and June 4. It was a roaring success: around 198,000 British and 140,000 Allied (mainly French) soldiers were rescued from certain death. Almost all of their equipment was left behind, however, and what they hadn’t managed to destroy fell into German hands. But the preservation of lives and manpower far outweighed this in terms of importance. For it was only because of the lives saved at Dunkirk—and the Nazi’s remarkably misjudged decision not to press their advantage—that the allies were able to mount further campaigns against German-held Normandy in the years to come.

6 – The Relocation of Russia

Hitler launched his invasion of the Soviet Union on June 22, 1941. In doing so, he contravened the non-aggression Molotov-Ribbentrop Pact signed nearly two years previously, and broke the first rule in the Handbook of Warfare: Never March on Moscow. Stalin had repeatedly received information about Führer’s intentions but had officially chosen to ignore them, believing the Axis wouldn’t commit forces to Russia until they’d first defeated Britain. Unofficially, however, Stalin had already set in motion plans to keep the Soviets’ in the war long into the foreseeable future.

He would do this by relocating Soviet factories to the east behind the Ural Mountains; for—given that manpower was never a problem for the Russians—it was believed that as long as they protected production, the Soviet war machine could continue to run. Plans got underway on June 21. Stalin established an evacuation committee that would oversee the relocation—and establishment— of Soviet industry to the east (complete with hundreds of thousands of workers). And what they achieved was remarkable: railways cars shepherding men west to the front would, upon arrival, be loaded with industrial machinery and sent back east. By the end of 1941, GOSPLAN (the Soviet State Planning Committee) had overseen the transfer of 1,523 factories—most to the Urals, but others to Western Siberia, Central Asia and Kazakhstan.

Fortunately for the Soviets, there was already contingency in place, albeit unplanned. A core economic principle of the Soviet regime was that development should be encouraged away from the heartlands of Moscow and St. Petersburg. One of the chosen areas was the Urals. And so it was that it was already equipped with factory shell buildings, sophisticated railway networks and a powerful electricity grid. The only thing they hadn’t yet built was housing for the workers. But this was resolved in time. And just as well: for despite the enormous number of munitions and other factories captured by the advancing German army, it was only because of this massive undertaking that the Soviets could remain contenders in the war.

Of course, there were human retreats as well as industrial relocations during the campaigns on the Eastern Front. And in further efforts to limit the amount of supplies the Germans could get their hands on, the Soviets adopted a scorched earth policy. They cut communication lines, collapsed mineshafts and destroyed the area’s rail and road infrastructure. But as the fortunes of war shifted, the Germans adopted the same strategy, using it to much more brutal effect. During their retreats, they would burn farms, steal harvests and raze settlements—most famously that of Novgorod in 1944. Their rationale was psychological as well as pragmatic; as well as denying the Soviets resources they would also be committing them to help affected communities and damaging morale. Judging by the severity with which the Soviets ransacked Berlin, they had been right.