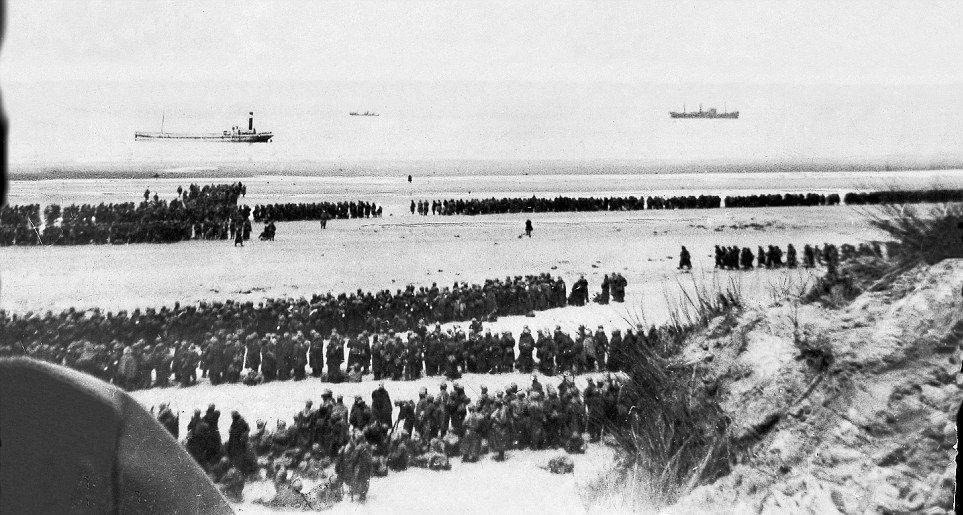 May 26, 1940, marked the beginning of ‘Operation Dynamo,’ the rescue of the defeated British Expeditionary Force and the French First Army from the port of Dunkirk in northern France. Trapped by the Germans, the allies faced defeat and capture. Their loss would have ended the Second World War after only six months. Expectations for the rescue were low, with only 30,000-45,000 men expected to return. But over the course of nine days, 338,226 members of the BEF and 123,000 French troops were safely conveyed to Britain. A new film, Dunkirk, released on July 21, 2017, commemorates these events. But what happened at Dunkirk to snatch a miracle from a military disaster?

The first six months of World War II saw a stalemate between the Germans and the allied forces sent to France to prevent the German advance. The BEF, the French army, and their allies held the line at the French-German border. The situation was favorable for the Allies. The combined British and French forces at least equaled those of the Germans. They also had twice as many artillery and tanks. If Belgium and Holland joined them, as they hoped, the allied forces would have had three more divisions than the Germans. They had every right to be optimistic.

Then on May 10, 1940, everything changed. The Germans finally went on the offensive. By May 20, the Battle of France saw the allies divided and on the run. They had effectively lost France to the Germans. The BEF faced being trapped without any hope of escape. The whole event was, in the words of Winston Churchill,‘a colossal military failure.” But it was worse than that. The loss of the BEF would mean Britain was effectively out of the war.

The BEF were still under orders from Churchill to support the French by attacking the Germans to the south. But this was a futile approach as they would have lost the fight- and probably the whole army. General Viscount Gort, Commander of the British forces, did not want to waste the lives of his men or end the British war effort. He felt the only course was for the BEF to withdraw across the channel so they could regroup and continue the fight.

On May 19, Gort put his plan to high command in Britain. He had already ignored the instructions of his superiors and ordered the 5th and 50th divisions to move north and hold open a corridor to the northern French coast so that the allied forces could escape. Meanwhile, across the channel in the dynamo room of naval headquarters, Dover Castle, Admiral Bertram Ramsey held his first meeting to plan the evacuation of troops. ‘Operation Dynamo’ had begun.

Options for the location of the evacuation were running short. The Germans had cut off Calais and Boulogne. By May 25, they had captured both port towns. The only available option left to the allies was Dunkirk. As well as having excellent port facilities, marshes surrounded the town and it had old fortifications- both perfect for holding off any advancing German troops. It also had the longest beach in Europe- the ideal place for the assembling troops to wait. Dunkirk may have been the last resort. But it was a good one.

Extraordinarily, the Germans gifted the allies the time to move their troops to Dunkirk by the German decision to halt their advance. On May 24, General Rundstedt, the German commander, advised Hitler to order a halt of German ground troops. Rundstedt was concerned that the marshland around Dunkirk would mire his tanks-vehicles he could not afford to lose. So, he decided that the German army would concentrate its efforts on taking Calais, leaving the Luftwaffe, the German air force, to stop the evacuation in its tracks.

The Siege of Lille and Other Rearguard Action

Most troops. But not all. Some units were held back to delay the advancing German ground forces. On May 28, at the town of Lille, 40 miles south of Dunkirk, 40,000 men from the French First Army stood against seven divisions of the German forces.

They successfully held out until May 31 when, out of food and ammunition, they were compelled to surrender. But their efforts had allowed 75,000 French troops to join those gathering with the British at Dunkirk.

British troops also played their part. In early June, just as the evacuation was reaching its close, the 51st division of the BEF, under the command of the French Tenth Army helped hold the line of allied defense along the River Somme. When the line finally broke, the Germans took some 10,000 members of the 51st division along with French troops as prisoners. They transported the captured allies to prisoner of war camps in Poland where most remained there until the end of the war.

But their sacrifice was not in vain. The efforts of these brave defenders delayed the German advance by four days. During that time, a further 100,000 troops were able to escape to the safety of the coast. By May 29, most of the BEF forces and the remains of the French army had reached Dunkirk. It is doubtful this could have happened without the rearguard protection.

The Role of the RAF

From May 27, the Luftwaffe began bombing Dunkirk and its docks. Soldiers, massing on the beaches were stranded and exposed. But the Luftwaffe’s attempts to hamper the evacuation were being thwarted by the RAF. On the first day alone, 16 squadrons of the RAF claimed 38 kills- losing only 14 of their craft. In total, the RAF flew 3500 sorties during Operation Dynamo and held most of the Luftwaffe away from Dunkirk.

This was quite an achievement as the RAF achieved had fewer planes than the enemy. They had lost a large number during the battle for France. Most of the fighters sent to Dunkirk were reserves of Spitfires that had been held back in Britain to protect the country against any potential German invasion. In all, this relatively small force lost 106 planes but still managed to take out 262 of the enemy’s craft.

The RAF also played its part in providing protection for the evacuation itself. Planes accompanied the convoys of ships heading back to Britain, offering protection from German aircraft and artillery units along the coast, German ships, and the infamous German U-boats. From June 1, this task became easier as all evacuations were limited to night. The concentrated timescale meant the RAF could concentrate all their resources between dawn and dusk.

Much of the RAF’s activity went unnoticed by the soldiers on the beaches because it was occurring inland. This was because it was the RAF’s primary mission to break up the German squadrons before they reached the coast. But some of the German bombers did get through, killing a third of the civilian population when they bombed Dunkirk’s port. These losses provoked bitter and unjust accusations after the event that the RAF had not done enough to protect the men on the ground. But without intervention from the sky, it is doubtful the sheer numbers of troops massing on the beaches of Dunkirk would have made it to the boats.

On the first day of the evacuation, only one cruiser, eight destroyers, and 26 other craft were available to help the evacuation. But by the May 28, the first of a hastily assembled fleet of over 800 boats, comprised of merchant ships, fishing boats, lifeboats, speedboats, car ferries, Thames river boats and pleasure craft had crossed the channel from the south of England to aid the rescue mission. Some of the ships and their crews were civilian volunteers. The Ministry of Shipping requisitioned others after scouring the River Thames for the suitable craft. The size of boats was no object. The smallest vessel, the Tamzine, was a 14ft open fishing boat.

The ‘little ships’ as they became known served various purposes. Those that were large enough were used to help transport the troops back across the channel. A paddle steamer, the Medway Queen, made a total of seven trips across the Channel, rescuing 7000 men in total. The journeys were not without danger-or casualties. Six German aircraft attacked the Royal Daffodil, a ferry from Liverpool. Hit below the water line, she just about managed to make it to port.

The smaller craft were used as ferries to transport men off the beach to the larger ships as the harbor area could not accommodate all the troops. Furthermore, the harbor itself was out of action after the second day of the evacuation. Any ships using it had to use the long concrete ‘moles’ on either side of it- despite the fact they were not designed to be used by ships.

Without the help of the little ships, the sheer numbers of men evacuated from Dunkirk just would not have happened. On the first day, when they were absent, only 7669 people were shipped out. But by the eight-day, thanks to their contribution, 338,226 soldiers had made it back to British shores. As a mark of respect and gratitude, all of the little ships that took part in Operation Dynamo were allowed to fly the ‘Dunkirk jack’: a flag of the George cross-overlaid with the arms of Dunkirk.