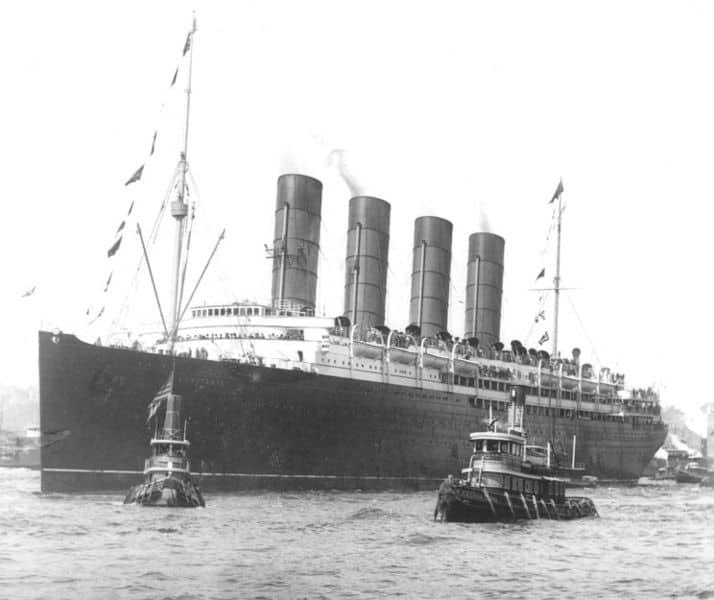 24. The Germans returned to unrestricted submarine warfare in 1917

Britain’s naval blockade continued after the sinking of Lusitania, and among the items, it listed as contraband were foodstuffs. International law did not support the British view, but neutral nations – including the United States – were prevented from shipping food to Germany and its allies. Protests over the British position were drowned out in the United States by those desirous of war with Germany and the British propaganda, which grew in intensity following the loss of Lusitania and the Bryce Report. The voices calling for peace negotiations in Europe, and denouncing British violations of international law, were not heard over the cries for war.

When the Germans returned to the policy of unrestricted submarine warfare in February 1917, the event combined with the Zimmerman telegram caused America to enter the war on the side of the Allies. American destroyers joined with the Royal Navy to suppress the U-Boat campaign for the rest of the war. By then most of the public had all but forgotten Lusitania and Arabic, and their sinking by the Germans. It was necessary to remind them, as Americans went to war to end all wars, of the inhumanity of the enemy they would encounter over there. American propaganda throughout the war followed the example of the British.

“Castles of Steel: Britain, Germany, and the Winning of the Great War at Sea”. Robert K. Massie. 2004

“Willful Murder: The Sinking of the Lusitania”. Diana Preston. 2002

“The Sinking of the Lusitania”. Thomas A. Bailey, American Historical Review. October, 1935

“Dead Wake: The Last Crossing of the Lusitania”. Erik Larsen. 2015

“Was There a Cover Up After the Sinking of the Lusitania?” Simon Worrall, National Geographic. March 15, 2015