CBS Funded Invasions to Televise and Other Extreme Lengths in History 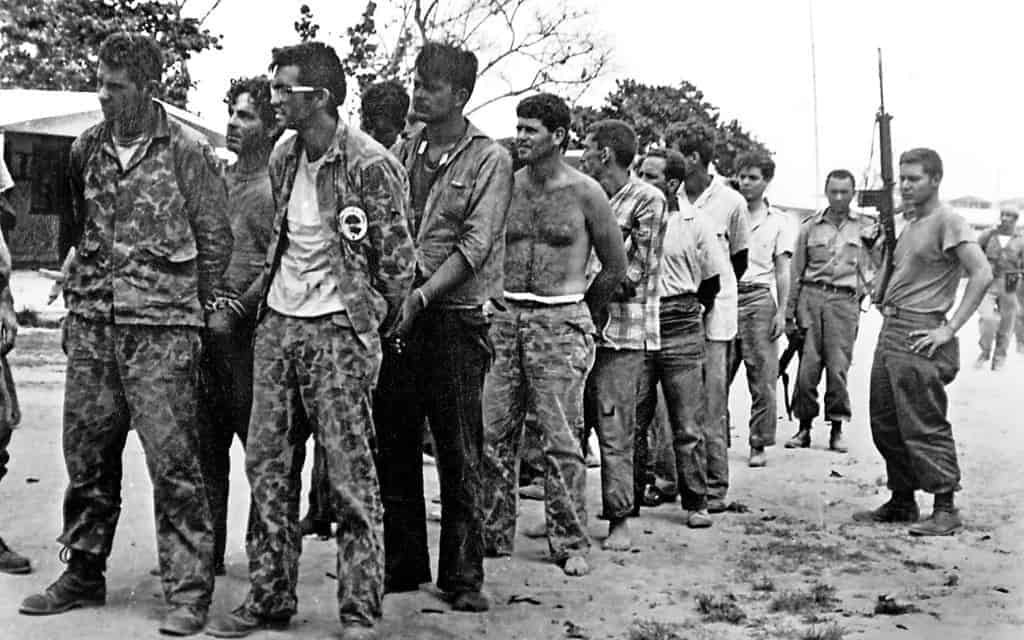 CBS Funded Invasions to Televise and Other Extreme Lengths in History

9. This Holdout’s Extreme Loyalty to Japan Was Met With Extreme Ingratitude

Teruo Nakamura exhibited extreme loyalty to Japan, with a nearly three-decades-long holdout in obedience to the last orders he had received from Japanese authorities. Unfortunately, Japan repaid his extreme loyalty with extreme ingratitude. Other famous holdouts such as Hiroo Onoda, whose holdout had ended a few months earlier, were celebrated as paragons of devotion to duty. By contrast, Nakamura attracted relatively little attention in Japan. For one thing, Onoda was an ethnic Japanese citizen, while Nakamura had been a colonial soldier from what, by 1974, had become the independent nation of Taiwan.

Although he wanted to be repatriated to Japan, Nakamura had no legal right to go there. So he was sent to Taiwan instead. As a member of a colonial unit rather of the Japanese Army, Nakamura was not entitled to a pension and back pay under Japanese law. Hiroo Onoda was awarded about U$160,000 by Japan, equivalent to roughly U$850,000 in 2021 dollars. By contrast, for his three-decades-long holdout in service to Japan, Nakamura was awarded only U$227 – equivalent to U$1200 in 2021. He returned to Taiwan, where he died of lung cancer five years later, in 1979.

8. A Lawyer’s Weird Dedication to Proving His Office Windows’ Strength

Canadian attorney Garry Hoy (1955 – 1993) was a respected senior partner at a Toronto law firm. Before going to law school, he had gotten a degree in engineering, and the robustness of modern building techniques fascinated him. He was especially proud of the tensile strength of the windows at his office in the Toronto Dominion Center, a downtown high rise. For some reason, he wanted everyone to know about the windows’ sturdiness, and got in the habit of proving it by body checking them.

As things turned out, and as Hoy discovered on July 9th, 1993, his extreme demonstrations were ill-advised. That evening, Hoy was at a welcoming party for incoming law student summer interns, in a conference room on the high rise’s 24th floor. Wishing to impress the interns with the office windows’ strength, he sought to demonstrate that they were unbreakable by throwing himself at a glass wall. He had done so many times before, and always ended up bouncing off harmlessly. Not this time.

As a Toronto Police detective described how Garry Hoy’s last demonstration of his office windows’ sturdiness came to an unfortunate end: “At this Friday night party, Mr. Hoy did it again and bounced off the glass the first time. However, he did it a second time, and this time crashed right through the middle of the glass“. He fell to his death 24 floors below. He need not have died, if he had left window tensile strength testing to the experts.

As a structural engineer told the Toronto Star: “I don’t know of any building code in the world that would allow a 160 pound man to run up against a glass window and withstand it“. Hoy’s auto-defenestration made the obscure lawyer a greater celebrity in death than he had ever been in life. His unusual demise became the basis for urban legends that were actually based on a true factual foundation. His death was featured in episodes of the TV shows Mythbusters and 1000 Ways to Die, garnered him entries in Snopes and Wikipedia, and earned him a 1996 Darwin Award.

After Genghis Khan crushed the Khwarezmian Empire in 1223, he sent a Mongol expedition of about 20,000 men to raid into the Caucuses and southern Russia. Led by generals Subutai and Jebe, the force defeated all in its path, including the Cumans, allies of the Kievan Rus. The Rus came to the Cumans’ aid, and a vast army set out after the raiders. The Mongols retreated, and their foes followed. For nine days, Subutai and Jebe led their pursuers on a merry chase across the Steppe.

As the Cumans and Rus rushed headlong after the seemingly scared Mongols, their army was transformed from a compact body and into a collection of separated units. Then suddenly, on the ninth day of the pursuit, the “fleeing” Mongols suddenly turned on their by-then strung out enemies at the banks of the Kalka River. In the ensuing battle, fought on May 31st, 1223, the Mongols annihilated their erstwhile pursuers. Things went from bad to worse for the captured enemy commanders, when the Mongols opted for an extreme victory celebration: by dining atop their captives.

5. The Tradition of Dining Over Defeated Foes

The Mongols enjoyed making examples out of vanquished foes. After their victory at the Battle of Kalka River, captured enemy commanders were laid on the ground, then a huge board was laid over their bodies. The victors then sat over the board to eat, drink, and celebrate their triumph, while slowly crushing and suffocating the defeated men beneath to death. However, the Mongols’ feasting over the bodies of defeated commanders was not the first time that vanquished leaders had faced such a fate.

Such ghoulish celebrations seem to have been pioneered by the first Abbasid Caliph Abul Abbas (722 – 754), nicknamed Al Saffah (“Spiller of Blood” – a well earned nickname). He initiated a revolt against the Ummayad Dynasty of Caliphs, and crushed them in a climactic battle in 750. He then tracked down and killed as many members of the defeated dynasty as he could. In 751, Al Saffah declared an amnesty, and 80 surviving Ummayad princes emerged from hiding to receive their pardons at a banquet. He had them seized, stabbed, covered their quivering bodies with leather rugs, and bade the other guests to sit down and dine atop them.

4. The Extreme Saber Rattling of the Cold War

The Cold War might have been the most dangerous stretch in the history of humanity, as two superpowers with enough nukes between them to exterminate mankind many times neared the brink more than once. When not fighting each other through proxies, the US and USSR often engaged in macho threat displays, like angry dogs growling at each other, or tomcats engaged in a hissing match. Some of the threat displays were subtle, while others were as subtle as a punch to the face.

The machismo got weird at times. As in extreme levels of weird. As in nuking the Moon weird – something that the United States considered doing in the 1950s. In the early Cold War years, despite the Red Scare and anticommunist hysteria, most Americans felt safe at home from foreign attack. Even after the Soviets detonated their first atomic bomb in 1949, few doubted America’s nuclear superiority. Nor did we doubt the superiority of the US Air Force and its bombers’ ability to nuke Russia, while its fighters kept Russian bombers from nuking us back. That changed in the blink of an eye.

3. The Small Satellite That Shattered America’s Sense of Invulnerability, and Stirred Up a Hornets’ Nest of Crazy

In 1957, Americans’ sense of security at home was shattered when the Soviets launched Sputnik, the first artificial Earth satellite. That terrified America. Sputnik itself was harmless, but Soviet rockets powerful enough to launch it into space were powerful enough to launch atomic weapons at the US. America’s sense of invulnerability evaporated. To restore national confidence, many ideas were bounced back and forth, quite a few of them extreme and weird. However, few of them were as extreme or as weird as the idea of nuking the Moon.

At the time, America’s space program was on the ropes, while the Soviets scooped us by successfully launching satellites – and demonstrating the power of their rockets. So the Eisenhower administration came up with a secret project, “A Study of Lunar Research Flights”. The project’s innocuous title masked its true purpose: detonating a nuke on the Moon. The former Armour Research Foundation, now part of the Illinois Institute of Technology, was tasked with the research. Among the researchers was a then-young graduate student, Carl Sagan, who would go on to become a global celebrity for popularizing science and astronomy on TV.

2. The Mild Mannered Carl Sagan Once Researched Nuking the Moon

A young Carl Sagan contributed to the Moon-nuking project with research and calculations. He focused mostly on the expected behavior of the dust and gas caused by a nuclear detonation on the lunar surface. As the project envisioned, an American missile carrying a nuclear bomb would launch from Earth, travel 238,000 miles to the Moon, and detonate upon impact. As an official involved in the project recounted decades later: “Now it seems ridiculous and unthinkable. But things were remarkably tense then“.

The Eisenhower administration hoped that seeing the nuclear flash on the Moon from Earth would restore American confidence after the launch of Sputnik. Simultaneously, it would intimidate the Soviets by demonstrating that the US had an effective nuclear deterrent. The plan could have been carried out by 1959 when the US Air Force began deploying ICBMs. However, the weird project was abandoned because of the risk to people on Earth in case of failure, and because scientists raised concerns about contaminating the Moon with radiation.

1. The Extreme British Plan to Punish a Troublesome Egyptian Ruler by Blocking the Nile

Egypt was a British client state and protectorate from 1882 to 1952, and Britain-based troops there to protect her interests. Most important of those interests was safeguarding the Suez Canal, of which the British government was a majority shareholder. Then in 1952, nationalist Egyptian officers led by Gamal Abdel Nasser overthrew Egypt’s pro-British king. The new government demanded that British troops leave Egypt, and in 1956, nationalized the Suez Canal. Nasser infuriated British Prime Minister Anthony Eden, who was determined to put the Egyptian upstart in his place. So secret plans were drawn for an extreme solution: cut off the Nile’s flow of water.

Britain controlled Uganda, where the Owen Falls Dam lay astride the White Nile, a main source of the river flowing into Egypt. The idea was cut off the flow in Uganda, thus reducing the Nile’s water volume by seven eighths by the time it reached Egypt. The plan was ultimately rejected because it would deprive other countries between Uganda and Egypt of water, would take too long, and would produce a PR nightmare. Instead, Eden opted for a direct military intervention. The result was the 1956 Suez Crisis, which ended with Britain forced into a humiliating climb down, and the wrecking of Anthony Eden’s political career.

Daily Sabah, August 6th, 2015 – The History of Fratricide in the Ottoman Empire

Motherboard, April 25th, 2013 – The Soviet Scientist Who Dreamed of Melting the Arctic With a 55 Mile Dam

Smithsonian Magazine, September 4th, 2018 – When the US Government Tried to Make it Rain by Exploding Dynamite in the Sky

Snopes – Did a Man Die Demonstrating a Window’s Strength?