12 of History's Most Bizarre Rulers

12 of History’s Most Bizarre Rulers 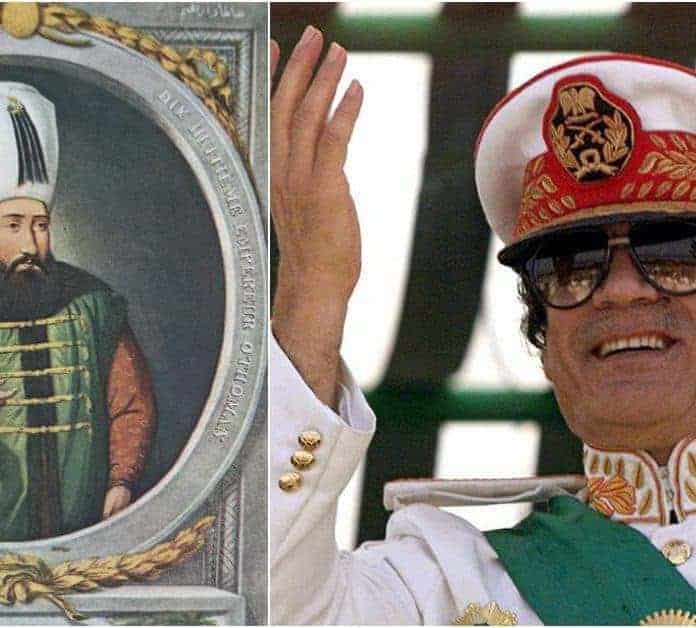 Erratic behavior is one thing when exhibited by a private citizen. But in a ruler, with the power and resources of a state at his or her beck and call, such traits are something else entirely, carrying not only a potential for farcical or hilarious outcomes but also the potential for disaster and catastrophe.

Today, the odds of catastrophic results stemming from rulers’ craziness are significantly lessened, although not anywhere close to eliminated, due to the spread of democracy and the attendant checks and balances, as well as the necessary diffusion of  power throughout complex government machinery even in non-democratic states, which act as de facto checks in their own rights. But throughout most of human history, rulers routinely came to power simply by winning the lottery of birth, and checks and balances on their whims were few and far in between.

Muammar al Qaddafi (1942 – 2011), self-declared “Brotherly Leader and Guide of the First of September Great Revolution of the Great Socialist People’s Libyan Arab Jamihirya” of Libya, was an army colonel who overthrew the Libyan monarchy in a 1969 military coup to become that country’s dictator until his overthrow and death in a popular uprising in 2011.

Called the “the mad dog of the Middle East” by Ronald Reagan, just before sending jets to bomb him, Qaddafi’s 42 year reign was marked by dramatic twists and turns, morphing from socialism to Islamic fundamentalism, from sponsorship of terrorism to avid cooperation in the Global War on Terror, and starting off as an Arab nationalist only to end up reviling Arabs and turning to African nationalism instead.

Qaddafi saw himself as a messiah, and modeling himself on Chairman Mao, he published The Little Green Book, containing a political philosophy labeled The Third International Theory – a mix of direct democracy, Arab and African nationalism, and Islamic socialism – as an alternative to capitalism and communism, which was required reading for Libyans and which formed the theoretical basis of his government. In reality, Libya was a kleptocratic dictatorship, governed on the basis of nepotism to enrich Qaddafi’s family and his tribe, with a grossly mismanaged economy that survived solely due to an abundance of oil and gas.

A creepy womanizer, he had a habit of hitting on female reporters, often meeting them for interviews in bathrobes or in his underwear. He became obsessed with former US Secretary of State Condoleeza Rice, referring to her as his “darling black African woman“, and showered her during a visit to Tripoli with $212,000 worth of gifts, including a lute and a locket with his picture inside.

He also saw himself as a fashion icon, and to that end cultivated an odd collection of ensembles and sartorial choices that made him modern history’s most bizarrely dressed ruler. Changing in and out of silly uniforms multiple times a day, he was the closest real-life depiction of a James Bond villain. The cartoonish villain look was further enhanced by his all-virgin female bodyguard, officially named the “Revolutionary Nuns”, but known more commonly as the Amazonian Guard.

Beneath the buffoonish look and cuckoo philosophy, however, was a brutal dictator whose regime engaged in repression, torture, murder, and sundry human rights violations. Among his vices was the habit of ordering women kidnapped off the street – including teenaged girls – and taken to one of his many palaces, including at least one who was kept imprisoned in his basement for six years, during which he forced her to watch pornography while snorting cocaine with him, and repeatedly raped her, urinated on her, and subjected her to sundry perversions. He was finally overthrown in a revolt in 2011 and captured by rebels, who tortured and likely sodomized him before killing him.