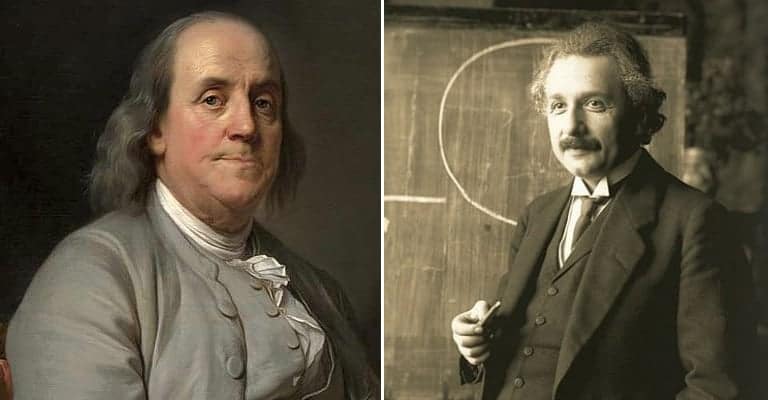 8. Known in life as “The Divine One”, Michelangelo would only be a positive contribution to the modern world’s less traditional artistic scenes

Known commonly simply by his first name, Michelangelo di Lodovico Buonarroti Simoni reigned as one of the greatest artists of the High Renaissance. Sent to Florence as a youth to study grammar, even as a boy Michelangelo was already more interested in the arts, spending most of his time with painters and copying pieces from churches. Producing several of the most famous works of painting, sculpture, and architecture in history, Michelangelo, known in life as “The Divine One”, is perhaps the only individual capable of challenging Leonardo da Vinci, his contemporaneous rival, for the definitive title of “Renaissance Man”.

Sculpting two of his best-known works – the Pietà and David – before the age of thirty, Michelangelo transitioned for a time back into his childish obsession with painting. Creating two of the most influential frescoes of all time, both of which were for the Sistine Chapel –The Last Judgment and the scenes from Genesis found on its ceiling – Michelangelo eventually, at the age of seventy-four, became the architect of St. Peter’s Basilica. Influencing generations of successors attempting, and failing, to surpass his artistic genius, the return of Michelangelo could only mean more legendary works and valuable additions to human culture.

7. It would be an interesting social experiment to observe Genghis Khan in a world so divorced from his own

The founder and first Great Khan of the Mongol Empire, Genghis – known also by his birth name Temujin and as Taizu under his grandson’s Yuan dynasty – stands among the greatest and most fearsome rulers from all of human history. Uniting by force the disparate tribes of the Central Asian plateau over a period of decades, in 1206 CE Genghis turned the combined might of his new empire against the historic enemies of the Mongol people. Launching an invasion of China, bringing the northern Jin dynasty to its knees, Genghis only broke off his unrelenting assault to attack the Islamic Khwarazmia following their execution of his ambassadors.

Utterly destroying the offending nation, conquering vast portions of Asia along the way, Genghis laid the foundations for what would become the largest contiguous empire in history. Known historically for his savage brutality against his enemies, ruthlessly subjugating lands under his control according to his whim, in addition to providing learning opportunities about a largely lost period of history, it would be an amusing, perhaps even cruel, social experiment to place a nomadic ruler who disdained wealth and possessions into the modern materialistic world where such things are the primary defining characteristics of most people’s self-worth.

6. Martin Luther King Jr. deserves the opportunity to pass judgment on the fifty years since his murder and determine whether America has actually moved forwards

An American Baptist minister who rose to become the most visible spokesperson of the Civil Rights Movements, Martin Luther King Jr. remains to this day one of the most respected individuals from modern history. Leading the Montgomery bus boycott in 1955 and elected the first president of the Southern Christian Leadership Conference in 1957, following the failed struggle in 1962 to end segregation in Albany, Georgia, King helped organize the now-famous March on Washington a year later. Delivering his universally acclaimed and celebrated “I Have a Dream” speech from the steps of the Lincoln Memorial, King proclaimed a vision of the future without racial hatred or discrimination.

Winning the Nobel Peace Prize in 1964, recognizing both his activism but also his passionate conviction in nonviolent resistance, in 1965 King was a leading figure in the Selma to Montgomery marches. Planning a national occupation of Washington D.C. in 1968, on April 4 of the same year King was assassinated in Memphis, Tennessee, by James Earl Ray. Posthumously awarded the nation’s highest honor – the Presidential Medal of Freedom – as well as commemorated by a federal holiday and memorial on the National Mall, King deserved the chance to provide an honest assessment of the ongoing struggle for racial equality and whether or not his dream, even now fifty years on, has been realized.

5. The returns of varying religious founders would provide much-needed clarity on the disputed subject of religion

One of the most controversial components of human existence, religion continues to both unite and divide the various tribes of our species throughout the world. Inspiring great works of devotion and sacrifice, as well as tremendous acts of violence and hatred in the name of divine authority, the ultimate question of the universe is one that likely cannot ever be conclusively answered via rational scientific means but instead depends upon the individual logic or faith of each person. That would be unless one could converse with the founders of each world religion, to dissect and analyze their own claims firsthand.

Whilst modern scholars debate the historicity of Jesus and his miracles, of the Buddha and his conversion from Siddhartha Gautama to a religious leader, or of Mohammad and the divine revelation he supposedly received in the Cave of Hira, these inquiries can be far more definitively answered via the specific individuals in question. Resulting in either the unification of humanity under a single banner of one true religion following recorded demonstration of the divine, or the death knell of religion and the emergence of humanity into an age of secular reason, one cannot deny the rationality nor usefulness of bringing such people back from the dead.

4. The resumption of Alfred Hitchcock’s career could only mean original and modern thrillers on a level rarely seen by today’s audiences

Widely considered among the greatest and most influential filmmakers in the history of cinema, Sir Alfred Hitchcock was an English director and producer active across a six-decade career spanning from 1919 to 1980. Known as the “Master of Suspense“, Hitchcock was personally responsible for directing more than fifty feature films, becoming in the process as famous as his actors and arguably the first modern celebrity filmmaker. Entering the industry in 1919 as a title card designer, Hitchcock made his directorial debut just six years later with The Pleasure Garden before starting to make impactful contributions to the thriller genre in 1927 with The Lodger: A Story of the London Fog.

Garnering a total of forty-six Oscar nominations for his movies, winning six, Hitchcock lent his name to his unique style of film-making, employing the use of camera movements to mimic a person’s gaze as to transform viewers in voyeurs and maximize anxiety. Directing four films regarded as among the greatest of all time – Rear Window, Vertigo, North by Northwest, and Psycho – eight of his films have been selected for preservation by the Library of Congress. With the advances of modern cinema at this disposal, and with a noticeable dearth of high-quality theatrical content, Hitchcock’s renewal would be a welcome addition to today’s over-saturated blockbuster-dominated medium.

3. Benjamin Franklin was not only instrumental in laying the foundations of the United States but resided at the forefront of science and technology

A polymath who would become one of the most remembered Founding Fathers of the United States, Benjamin Franklin enjoyed an illustrious career ranging from being an author, a scientist, and finally a statesman. Across a life that almost spanned the entirety of the eighteenth century, Franklin served as one of the foremost figures of the American Enlightenment. Responsible for numerous inventions, most prominently the lightning rod, bifocals, and an eponymous stove, Franklin is widely celebrated today for his discoveries and theories relating to electricity as well as founding the University of Pennsylvania.

Earning the title of “The First American“, Franklin was one of the earliest advocates of colonial unity and independence. Serving as the nation’s first ambassador to France, Franklin was instrumental in forging and maintaining the vital Franco-American alliance that proved essential to achieving victory against the British in the Revolutionary War. Laying the foundations as the inaugural Postmaster General for the country’s communications network, Franklin’s interests were wide-ranging and impactful. Like Washington, Franklin – who is also depicted on American currency, appearing on the one hundred dollar bill – similarly deserves the chance to pass judgment on his successors whilst also enjoying the inventions which followed his own.

2. H.G. Wells predicted many of the everyday technologies we depend upon today and it is only fair he be permitted to also enjoy them

A forward-looking social critic, Herbert George Wells is today most remembered for his artistic contributions as an author and the “father of science fiction“. However, during his own lifetime, Wells was known best as a futurist and progressive commentator, envisioning a brighter path ahead for humanity and attempting to encourage mankind to tread said road. Foreseeing the advent of aircraft, mechanized warfare, space travel, nuclear weapons, satellites, and even the Internet, Wells’ imagination bore no limitations. Nominated for the Nobel Prize in Literature four times, Wells’ acclaimed works include The Time Machine, The Invisible Man, and The War of the Worlds.

However, Wells was more than simply a visionary author, campaigning also as a committed socialist. Supporting the short-lived League of Nations as a means to potentially unite humanity and end future conflicts, the failure of the organization weighed heavily on Wells. Penning The Rights of Man in 1940, the influential text laid the groundwork for the Universal Declaration of Human Rights eight years later. Sadly, Wells did not live to see his moral vision instituted globally, dying in 1946, and it would be only fair to permit Wells to see the world he could only dream about within the pages of his novels.

1. The father of modern science, Galileo Galilei was persecuted by the Catholic Church despite the veracity of his claims

Considered the father of several disciplines and fields, including observational astronomy, modern physics, the scientific method, and even modern science in general, Galileo Galilei was an Italian polymath who lived during the Renaissance period. Championing the heliocentric interpretation of the universe proposed by Copernicus in 1543 – twenty-one years prior to Galileo’s own birth – in opposition to the prevailing geocentric models of the time, Galileo’s consistent and ardent defense of the theory ultimately attracted unsavory attention. Drawing the ire of the Roman Inquisition, after decades of ill-treatment and abuse Galileo was eventually accused of heresy in 1633.

Found “vehemently suspect of heresy”, Galileo was forced to recant his scientific beliefs, in particular, that the Sun lies at the center and around which the Earth revolves. Sentenced to life imprisonment, commuted to house arrest, for the remainder of his life, Galileo used his final years to condense and publish prior research and ideas on subjects of physics spanning speed and gravity to relativity and motion. One of the foremost scientists in human history, Galileo deserves not only to know his steady conviction in his theories was well-founded but to experience the wonders of the modern age he helped to build.

“The Man He Became: How FDR Defied Polio To Win The Presidency”, James Tobin, Simon and Schuster (2013)

“Michelangelo On and Off the Sistine Ceiling”, Creighton Gilbert, George Braziller Publishing (1994)

“Hitchcock: Past and Future”, Richard Allen and S. Ishii-Gonzales, Routledge (2003)

“The Dark Side of Genius: The Life of Alfred Hitcock”, Donald Spoto, Da Capo Press (1999)

“The truth about Galileo and his conflict with the Catholic Church”, Jessica Wolf, University of California, December 22, 2016