This Man Challenged Beethoven to a Musical Duel. One of Them Quit Halfway Through. 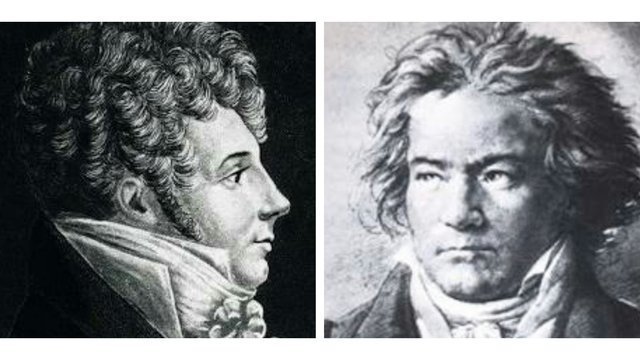 This Man Challenged Beethoven to a Musical Duel. One of Them Quit Halfway Through.

Daniel Steibelt was a German born classical pianist and composer. He apparently also had a huge ego because he challenged the one and only Beethoven to a musical duel in Vienna in 1800.

Steibelt studied with Johann Kirberger before he was forced to join the Prussian army. When he defected he went to Paris to focus on music. He rose to great popularity with La Coquette, a song he composed for Marie Antoinette.

His Concerto No. 3 containing Storm Rondo also became wildly popular. He eventually toured Germany which brought him to Vienna and his challenge with the one and only Beethoven. It was rumored Steibelt also came to the city to pursue larger fame for his music. The city’s music patrons liked the idea of a duel between Steibelt and Beethoven. Each musician got a Prince to sponsor the idea.

Since Steibelt was the challenger, he was to play first. In a cocky move, he tossed his sheet music aside. He was renowned for his storm-like bass and that night, apparently he did indeed conjure up a storm. He was greatly applauded. After his piece, all eyes were on Beethoven.

Historian Alexander Wheelock Thayer speaks to the growing rivalry between the two:

“When Steibelt came to Vienna with his great name, some of Beethoven’s friends grew alarmed lest he do injury to the latter’s reputation. Steibelt did not visit him; they met first time one evening at the house of Count Fries …

Eight days later there was again a concert at Count Fries’s; Steibelt again played a quintet which had a good deal of success. He also played an improvisation (which had, obviously, been carefully prepared) …

This incensed the admirers of Beethoven and him; he had to go to the pianoforte and improvise. He went in his usual … manner to the instrument as if half-pushed, picked up the violoncello part of Steibelt’s quintet in passing, placed it (intentionally?) upon the stand upside down and with one finger drummed a theme out of the first few measures.”

Beethoven picked up the sheet music that Steibelt had tossed aside, and chose to play it upside down. Beethoven then proceeded to improvise an opus based on just three notes of Steibelt’s music. He created his own “storm,” he embellished, and mocked what he felt was Steibelt’s simplistic piece.

Steibelt stormed out of the room while Beethoven was still playing. His benefactor Prince followed him out. Completely humiliated, Steibelt decided he’d never set foot in Vienna again as long as Beethoven lived there. Beethoven lived out his days in the city and the embarrassed Steibelt never returned. It’s tough to challenge a master, especially a master in his own city with his own fans and his own Princes to back him up.

Nonetheless, Beethoven took on many challenges. He was known to participate in a number of duels including with Joseph Wolfl and Abbe Gelinek. Beethoven wiped the floor with his opponents in both those duels as well. Piano duels were certainly safer than other types of duels of the day. You wouldn’t end up dead, but your career might.

That said, Steibelt’s career was far from over. He primarily again took up residence in Paris. He wrote music for the likes of Napoleon and some Russian Czars. It was thought that Steibelt’s own arrogance and attitude somewhat prevented him from reaching the fame of some of his other contemporaries. Beethoven was known to be gentle, kind, and also somewhat clumsy, so it’s always a bit of a wonder if he dropped that sheet music intentionally or on accident. According to all accounts, it was very much intentional. The deliberate move of a real master.

Nonetheless, Steibelt left behind an enormous number of contributions for piano, and his playing was characterized as brilliant. His operas Cendrillon (1810) and Romeo et Juliette (1793) are often performed and enjoyed today.