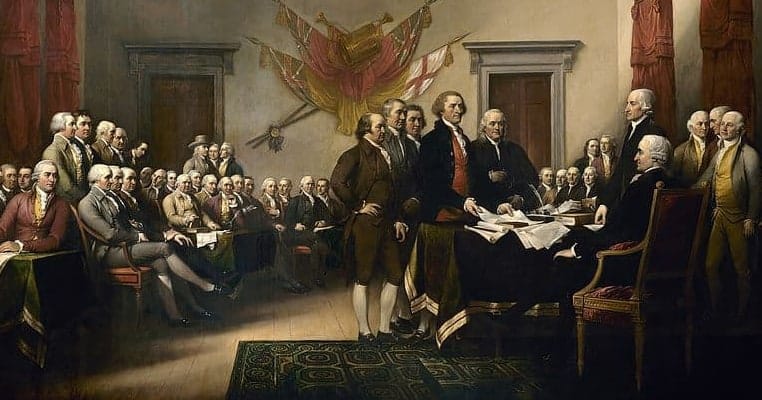 4. Thomas Jefferson compelled, under false promises, a teenage female slave to serve as his concubine after the death of his wife.

Thomas Jefferson was perhaps the most influential of the Founding Fathers, acting as the principal author of the Declaration of Independence, the inaugural Secretary of State, Third President of the United States, and responsible for the Louisiana Purchase. Less respectably, after the death of his wife, Martha, in 1782, Jefferson initiated a sexual relationship with teenage African slave Sally Hemings. Summoning his slave to France in 1787, Hemings, aged approximately 16, was impregnated during her 26-month residence in Paris. Offered the choice to petition for her freedom under French law, Jefferson manipulated Hemings with the promise of freedom for her children should she return to Virginia and slavery.

Although the child produced in Paris did not long survive, Jefferson is believed to have produced at least six further children by Hemings over a period of more than a decade. Whilst historically their relationship has been portrayed in a romantic light, recent examinations have shed a darker picture on Jefferson’s actions. Hemings, a teenager, could not possibly have refused the advances of her 40-year-old master and categorically was unable to refuse consent. Coerced through unfulfilled promises for her children, Hemings was repeatedly raped by the American legend, even if social norms at the time did not perceive it as such.

3. John Adams, the second American president, was denied a second term of office due to his terrifyingly authoritarian and monarchical political leanings.

Throughout his life, John Adams never shied away from courting controversy. From defending the accused British soldiers after the Boston Massacre to his opposition to racial slavery, the Second President of the United States arguably absorbed the most flak for his surprisingly authoritarian and monarchical tendencies. Suggesting that “hereditary monarchy or aristocracy” were the “only institutions that can possibly preserve the laws and liberties of the people”, Adams sought instead to induce “ordered liberty” under a conservative social hierarchy. During his two-term tenure as Vice-President to George Washington, Adams garnered negative attention for proposing the president be referred to as “His Highness”.

Elected in his own right to succeed Washington in 1796, Adams’ actions in the capacity as the nation’s chief executive failed to abate concerns regarding his political ambitions or designs. Of particular note, the Alien and Sedition Acts (1798) – granting, among other powers, the president the right to imprison or deport non-citizens at will in addition to criminalizing criticism of the federal government – was seen as an ominous confirmation of authoritarian objectives. These acts underpinned the Anti-Federalist victory in the election of 1800, which saw Jefferson become President, and condemned Adams to be just one of just 7 commanders-in-chief to fail to acquire a second term of office after prior election.

2. Richard Stockton, a humble lawyer, endured torturous conditions in British captivity for refusing to accept a conditional pardon demanding his acquiescence during the Revolutionary War.

Richard Stockton was an American lawyer elected to the Second Continental Congress, whereupon, in this capacity, he acted as the first signatory to the Declaration of Independence from the New Jersey delegation. During efforts to evacuate the family of John Covenhoven, on November 30, 1776, Stockton was captured along with his friend. Dragged from his bed in the middle of the night and transported to Perth Amboy by Loyalist bounty hunters, Stockton refused to accept the conditional pardon offered by General Howe and was instead imprisoned. Incarcerated at Provost Prison in New York, Stockton was subjected to brutal and intolerable conditions causing lasting health problems.

Suffering from starvation and exposure, Stockton endured the additional indignity of having much of his property, including furniture and livestock, seized or destroyed. His library, among the most extensive in the Americas, was burned by the British in an act of deliberate malice. In total, 4,435 soldiers died in battle in New York during the Revolutionary War, in contrast to more than 12,000 in prisons. After weeks in captivity, Washington himself petitioned Howe for the release of political prisoners including Stockton. Offered freedom on condition he would abstain from further involvement in the rebellion, Stockton, in immeasurably poor health, was eventually freed to return to what remained of his estate.

1. George Washington deliberately exploited a legal loophole in Pennsylvania law to avoid being forced to emancipate his slaves whilst serving as President of the United States.

After the ratification of the United States Constitution, whilst a new city was built to serve as the capital of the fledgling nation – Washington, D.C. – the city of Philadelphia was selected to serve as the temporary capital. Remaining the seat of government for the duration of Washington’s two terms as president, the commander-in-chief was forced to relocate to Philadelphia, bringing with him a number of enslaved persons to serve in his household. In 1780, Pennsylvania had passed the Gradual Abolition Act, stipulating that slaves were freed after they reached the age of 28 along with those who had lived in the state for more than six months.

In order to avoid surrendering his property, Washington would transport his slaves back to Mount Vernon, or on some occasions literally to the state lines, every six months. Through this method, kept deliberately secret to avoid scandal, Washington was able to perpetually reset the clock on his slave’s freedom and circumvent the clear intended purpose of the 1780 emancipation legislation. Reflecting his sustained desire to retain his Negro possessions, Washington also signed into law the Fugitive Slave Act in 1793 in addition to launching a three-year search for an escaped female slave who fled to New Hampshire after learning she was to be given as a wedding present.

“I am Murdered: George Wythe, Thomas Jefferson, and the Killing that Shocked a New Nation”, Bruce Chadwick, John Wiley & Sons (2009)

“The Founding Fathers and His Slaves”, Sarah Booth Conroy, University of Virginia Press (1998)

“The Fort Wilson Incident of 1779: A Case Study of the Revolutionary Crowd”, John K. Alexander, The William and Mary Quarterly (1974)

“John Hart: The Biography of a Signer of the Declaration of Independence, Cleon E. Hammond, Pioneer Press (1977)

“Did George Washington’s False Teeth come from his slaves?: A look at the evidence, the response to that evidence, and the limitations of history“, Kathryn Gehred, University of Virginia (October 19, 2016)