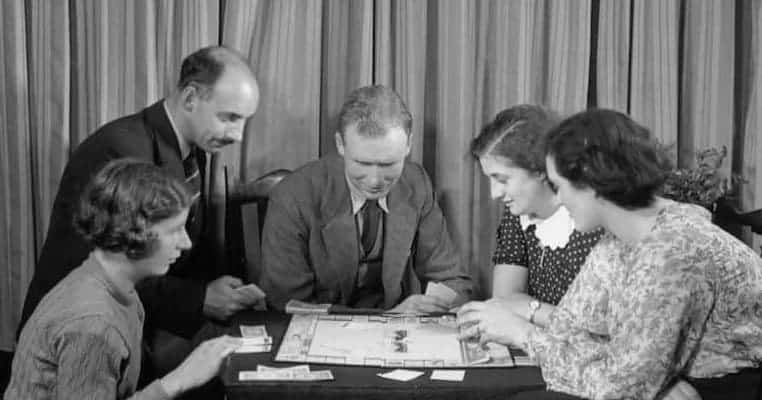 Next to Monopoly, Scrabble became a popular board game during the 1930s. The man who invented Scrabble was Alfred Mosher Butts, who cited the reasoning for his inventions as boredom. Furthermore, Alfred became unemployed and realized he had a lot of time on his hands. Therefore, Alfred made advancements to a previous board game he created called Lexiko. After his invention, Alfred started selling his game. These sales helped Alfred, and his family, survive through the Great Depression.

Companies, such as Parker Brothers, continued to try to make money off of the game Monopoly. About a year after Monopoly became a hit in the homes of families all over the United States, they decided to invent another game. This game, known as Bulls and Bears, became their second major financially-themed game. However, Bulls and Bears would not see the popularity height over Monopoly. This game focused on buying and trading stocks in order to make more money than your opponents.

It didn’t take long after the major success of Monopoly for the original inventor, Magie, to start contacting the newspapers. About 1936, Magie, approached the Washington Post and Washington Evening Star to inform them that she was the inventor of Monopoly. She stated that there was hardly anything different between her version and the game. Magie also told the reporters that she only made about $500 from the game. Unfortunately, Magie would never see the fame she deserved as an inventor.

Fortunately, the Great Depression would see an end in 1939. While people continued to struggle and stretch their pennies, jobs began to open, and the economy started to look a little better. The board game of Monopoly, along with many others, would continue to see popularity, with new versions created throughout the following decades. Eventually, computers would become a modern invention. Soon, people began buying versions of Monopoly that they could play on their computer. Today, you can play the game by downloading an app on your smartphone.

However, the 1930s wouldn’t be the only time when the board game of Monopoly would help see people through an economic downturn. When the economy dived around 2008, sales for board games, especially Monopoly, saw a climb. While many people bought these purchases over the internet, people continued to buy Monopoly and other board games. In fact, the sales of board games rose to 6% while the sales of other toys fell by 3%.

“How the Great Depression Became the Golden Age for Monopoly.” History.com, November 2018.